A senior EU official has said the UK demands on the Northern Ireland Protocol, as set out in its July paper, are "unattainable".

The UK's Command Paper calls for a sweeping renegotiation of the Protocol, including the removal of the European Court of Justice (ECJ).

"We have always made clear that we think that the objectives set out by the UK are unattainable," the official said.

The official said that the UK wanted to remove the role of EU institutions, and that the ECJ sat on top of a broader governance structure over the protocol, which the UK did not accept.

"So long as that remains the UK’s positioned I don't see what we can do," the official said.

He said that the EU had "proven beyond a reasonable doubt" that its proposals to ease the implementation of the protocol "constitute a significant difference in comparison to the baseline scenario, which is the actual Northern Ireland Protocol as it stood on the day it was designed and even go beyond the status quo as it stands at the moment."

The official said the EU had come forward with practical proposals on the circulation of UK medicines in Northern Ireland, on customs, agrifood checks and an oversight role for Stormont and businesses.

He said these included flexibilities on the movement of food, not just to retailers but also to schools, hospitals and prisons.

The official said there had been agreement at the level of EU UK technical talks on the degree of risk that should be accounted for when goods move from GB to Northern Ireland.

Foreign Affairs Minister Simon Coveney told the Dáil there is still some time to ensure that negotiation and partnership can work in the ongoing discussions between the EU and the UK.

Simon Coveney said the Government's main focus is to try to encourage progress in those discussions.

He said that he hopes to have direct talks with UK Brexit negotiator David Frost next week and has recently spoken with one of the US President's top advisers.

"The question is, how do you determine whether a good is destined for Northern Ireland or for the internal market? What we think does not work is just to leave it to traders to say where it goes.

"We think that a sufficient amount of data needs to be collected in all cases, in order to then be able to do a credible risk assessment to work out whether the destination as declared actually makes sense or not."

The official said that the UK had demanded that traders in Northern Ireland operate under UK as opposed to EU VAT rules.

However, he said the UK had declined to use the structures under the Withdrawal Agreement, including the EU UK Joint Committee, which have a specific provision for dealing with problems relating to VAT.

However, the EU official said: "Our package as a whole provides significant changes in operating on the ground, in effect a new model of the implementation of the protocol.

"In particular, the customs related red tape would be cut in half, a significant range of retail goods would also benefit from simplified application. And overall, our ideas would result in a reduction up to 80% of SPS [agrifood] checks. This is something that we consider to be extremely meaningful."

A US group of Irish American political leaders and diplomats is calling on the UK government not to invoke Article 16, suspending the Northern Ireland Protocol.

The Ad Hoc Committee to Protect the Good Friday Agreement said such a move would be unwise and unpopular in Northern Ireland.

"A clear majority of citizens in Northern Ireland supports the Protocol. The business community does also. To lose the economic benefits of the Protocol coupled with the collapse of the Good Friday Agreement will be a double loss from which Northern Ireland may not recover," according to the Co-Chair of the committee, former US Congressman James Walsh.

His fellow co-chair, former US Congressman Bruce Morrison, warned that constant attacks against the Protocol could eventually lead to the collapse of the Northern Ireland institutions.

"Prime Minister Johnson needs to rein in Lord Frost quickly and US Secretary of State Blinken should pick up the phone and tell his counterparts in London in plain American English to stop," Mr Morrison said.

The committee was formed over two years ago by political leaders and diplomats who have a history of supporting the peace process in Northern Ireland.

The group includes five former US ambassadors, several former US special envoys to Northern Ireland as well as leaders of Irish American organisations. 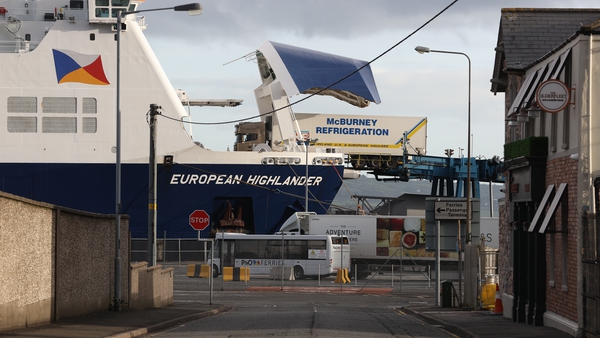 Lack of political will to find Protocol solutions - NIRC