At the same time the UK's main interlocutor on the protocol David Frost said the UK would set out "the next steps" on its approach to the protocol before the House of Commons before summer recess.

Mr Frost again hinted that the UK could trigger Article 16 of the protocol, which would lead to a suspension of some of its provisions.

Mr Lewis told the Policy Exchange think-tank: "The Chief Rabbi and the President of the [Jewish] Board of Deputies came to join me in a meeting with the leaders of the Jewish community in Northern Ireland.

"They made it very clear what problems and challenges the protocol was making.

"They mean that later this year, once the grace period for chilled meats ends, the Jewish community will be unable to get easy access, and potentially any access...to Kosher products.

"They used the phrase that this risked an exodus of the Jewish community from Northern Ireland."

Marie van der Zyl, president of the Jewish Board of Deputies, told the Belfast Telegraph this week: "The Belfast Jewish community is a great community with a rich history, but also an older and vulnerable one.

"We thank the minister for his time and urge the UK and the EU to generate a creative solution which means that Jews can continue to practice their faith in Northern Ireland."

Mr Lewis told the Policy Exchange this morning: "None of us can tolerate or be willing to accept that outcome."

Mr Frost, the Cabinet Office Minister in charge of relations with the EU, repeated criticisms of the EU's alleged approach to implementing the Northern Ireland Protocol.

He told the Policy Exchange: "The current situation is not consistent in our view with the careful balance of the Belfast/Good Friday Agreement. It is not what the Protocol should be about. That political reality has got to be acknowledged and dealt with, and the government can’t simply ignore that reality and stand by as things become more tense and more difficult."

He said protecting the EU’s single market had been "prioritised" over the other aspects of the peace process.

"Trade patterns are changing, supply chains are being diverted, the societal impact is clear. Addressing this is our primary concern. It is the UK government’s primary responsibility, safeguarding the best interests of Northern Ireland."

Article 16 can be triggered by either side if the protocol leads to "serious economic, societal or environmental difficulties that are liable to persist, or to diversion of trade…"

Hinting at the protocol being replaced, Mr Frost said: "We are clear. There will always need to be some kind of tailored treaty relationship between the UK and the EU, covering the delicate issues around Northern Ireland, and protecting the Belfast/Good Friday Agreement.

"That is absolutely clear. Our overriding goal is to find arrangements that are sustainable, proportionate, and have consensus to make them work.

He said the set of flexibilities announced by the EU last week, which included an extension to the grace period for chilled meats until 30 September, were positive, but that did not go far enough.

Mr Frost said: "The current talks process, the current negotiations are not dealing with fundamental issues within the protocol that are causing systemic problems. Customs, agrifood processes, and checks and controls that go with them, seemingly required to create a zero-risk approach to protecting the [EU] single market."

Starmer accuses Johnson of being 'reckless' towards NI

He has accused Mr Johnson of putting "his own narrow interests" above those of the people of Northern Ireland.

Writing an opinion piece in The Times newspaper ahead of a planned visit to Northern Ireland today, Mr Starmer said Mr Johnson's "reckless and foolish" approach to the Good Friday Agreement was a risk to the peace process.

He said: "I am sad to say that, after nearly three decades of slow but steady progress, we now have a Prime Minister who has put his own narrow interest above those of the people of Northern Ireland.

"We have a Prime Minister who has refused to take responsibility for his decisions, who is risking through his dishonesty, the stability of the peace process.

"The Prime Minister personally negotiated the Northern Ireland Protocol and he has a personal responsibility to make it work."

Mr Starmer called on the UK government to negotiate a deal on veterinary standards that could reduce the need for checks on goods crossing the Irish sea from Britain to Northern Ireland.

He said: "The recent extension of the grace periods was welcome, but that is not a durable solution."

He added: "Over a quarter of all trade to Northern Ireland is currently subject to onerous 'SPS' checks, largely on food and agricultural products.

"The UK and EU need to work out a veterinary standards agreement to bring assurance to the people of Northern Ireland and benefit food exporters across the UK.

"The United States has been clear that a veterinary agreement is not a fundamental barrier to signing an FTA.

"The Prime Minister promised an agreement of this kind during trade negotiations with the EU. Yet, where countries such as New Zealand and Switzerland have succeeded, he failed."

The Irish Government has said that an agreement on SPS, similar to that between Switzerland and the EU, could eliminate 80% of checks.

Mr Starmer said he understood the concerns of the unionist community and businesses in the region about the barriers introduced by the protocol, but added that it is now time for solutions.

He said: "These were problems that the UK government knew were possible when they signed it. It is time for serious, practical solutions."

The Labour leader said Northern Ireland should not be a partisan issue, noting the groundwork for the peace process done by former prime minister John Major.

He added: "Boris Johnson, though, cannot live up to that standard. His custody of the precious Good Friday Agreement has been designed to shore up his own party advantage. It is reckless and foolish."

Mr Starmer also took aim at the UK's Brexit minister and negotiator, David Frost, following a recent joint Op-Ed with Northern Ireland Secretary Brandon Lewis in The Irish Times, which warned of "damage" to the Good Friday Agreement if a "new balance" is not found for customs checks.

He said: "It is hard to know whether Lord Frost is merely naive or deliberately provocative.

"Whichever it is, the strategy of brinkmanship and picking fights in Northern Ireland is not the work of a serious politician.

"Does he not think the people of Northern Ireland deserve better than this?" 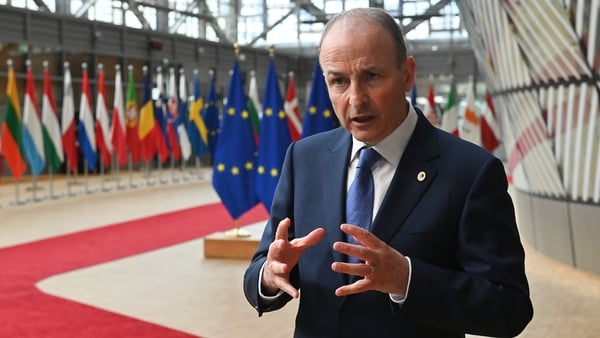