The Taoiseach has described the intervention by US President Joe Biden in the disagreement between Britain and the European Union over how to implement Northern Ireland's post-Brexit trade rules as a significant development.

Micheál Martin said the clear message from President Biden and his administration is that the sensible thing to do is to have alignment between the UK, the EU and the US.

"So therefore, I think he is saying to the United Kingdom - let's do the sensible thing here.

"Let’s work out a constructive, sustained agreement with the European Union in respect of Brexit, the withdrawal agreement and the protocol.

"Let's iron out any issues that are there, and there are some issues there that need to be resolved, but there’s a process for resolving them; through the joint committee, through the talks between [European Commission vice-president] Maroš Šefčovič and [UK Brexit Minister] David Frost," said Mr Martin.

Mr Biden and British Prime Minister Boris Johnson will hold their first face-to-face meeting today, during which they will lay the foundations for a new pact, despite Brexit and its consequences in Northern Ireland.

Meanwhile, the White House has denied reports that President Biden ordered US diplomats to criticise Mr Johnson over his handling of Brexit and its effects on the Northern Ireland peace process.

"This is wrong. First, this discussion wasn't directed by the President. It was not heightened. As with any ally, we have diplomatic conversations about areas where we have concern at many levels," a senior Biden administration official said.

The Taoiseach said the Government is heartened by President Biden's consistency of approach in relation to Northern Ireland and the protocol.

He said the Government has made it clear in other meetings with DUP leader Edwin Poots and MLA Paul Givan that it is open to engagement, and want these issues resolved in the best interests of the people living on the island.

He said that he thinks that President Biden's overarching view is that he is clear about the world being a world of democracies and authoritarian regimes and has a very clear vision that those on the democratic side of the equation should align together and not allow issues like this to sour the relationship.

Speaking on RTÉ's Drivetime, Mr Hoare said: "If the starting point is do we even countenance that as some sort of betrayal of Brexit then we're not out of the starting gate and I think that would be a missed call.

"For those who say 'well hang on you can't rearrange the deck chairs on the Titanic, you can't make the Protocol any better because this is a constitutional assault of the sovereignty of the United Kingdom', it is nothing of the sort."

"It is a trading arrangement and in the interest of the people and businesses of Northern Ireland who if the Protocol is successful then have a foot in both camps, the UK internal market and the EU single market."

He insisted that the future is bright for the North if the proposed measures are accepted.

"The best days of the Northern Irish economy I remind you are right in front of it if they maximise those opportunities and I very much hope that they do.

"There is no appetite in the UK either amongst customers, consumers, amongst retailers, amongst producers of food stuff and in parliament to see a reduction in our standards, in actual fact it is the other way round.

"My fear is that the dogmatists, the sort of Brexit purists who say unless everything is sovereign it has to be bad. In actual fact if we were to do this, the sitting invitation is there from the EU so to do, it removes at a stroke 82-85% of the checks, we would be exercising UK sovereignty by deciding to do that. We wouldn't be forced to do it.

The relationship between both sides is under strain, Mr Hoare said.

"I think what we have to try focus on is a restoration of trust and confidence and both are sadly lacking at the moment.

"Let's hope and pray that that's one of the outcomes of this bilateral talk between the President and the Prime Minister.

"More work and a greater flexibility of thinking with regards to what is at risk with entering the single market."

Minister of State for European Affairs Thomas Byrne said Ireland is "not asking anyone to get involved in a negotiation with Britain" over the protocol, but "certainty" is needed on the issue immediately.

Speaking on RTÉ's Today with Damien O'Reilly, Mr Byrne said the EU has been "more than generous" in its attempt to assuage British concerns.

He said there was "no substance whatsoever" to reports yesterday about checks on all goods coming from Ireland into the EU.

"I can knock that on the head completely. There is no substance to that suggestion whatsoever. That is not legally possible to happen and the European Commission said the same yesterday, so absolutely not. That is simply not possible," he said.

British cabinet office minister Michael Gove has said the US President, British Prime Minister and the Taoiseach are "all on the same page".

"We are all absolutely committed to protecting and upholding the Belfast/Good Friday Agreement in all of its dimensions," he said. 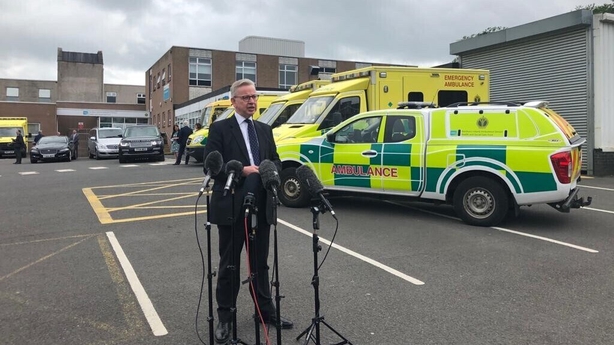 He said Mr Frost spoke to Mr Šefčovič about how to make the protocol "work in the interests of the people in Northern Ireland" and "that is something we all need to work together to ensure".

Speaking during a visit to the headquarters of the Northern Ireland Ambulance Service, Mr Gove said Mr Šefčovič is a "pragmatic politician" who "has the interests of the people in Northern Ireland at the heart of everything that he's doing".

When asked how far apart the two sides were in negotiations around the protocol, he said there are "some details that we do need to resolve in order to ensure that the protocol works effectively."

Meanwhile, DUP leader Edwin Poots said he has not seen evidence that the Northern Ireland Protocol can become workable.

"I think the European Union haven't put forward arguments other than 'we have signed this Protocol and everybody has to abide by it'," he said.

"The European Union have not demonstrated good faith when it comes to the Protocol. They have broken the protocol in so many ways themselves." 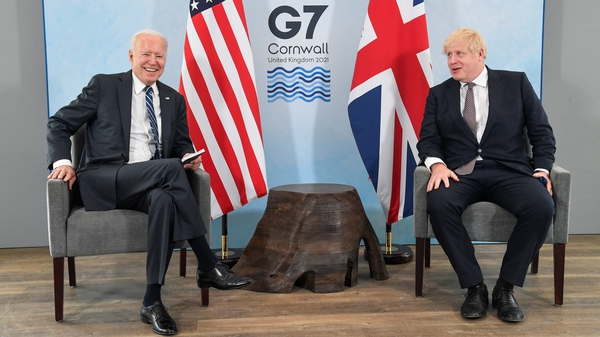