He said that allowing a vote to be carried out would be "repetitive and disorderly".

Last Saturday, the Commons was due to vote on Mr Johnson's Brexit deal. However MPs did not vote on it after the Letwin amendment was passed by 322 votes to 306.

The amendment withholds approval for the agreement until formal ratification legislation has been passed.

The Bill, which MPs will begin debating tomorrow, runs to 110 pages and is accompanied by 124 pages of explanatory notes.

Some MPs have complained that the government's timetable, which aims to complete its Commons passage on Thursday, means there will not be time for proper scrutiny.

If the government is successful it could pave the way for House of Lords to sit over the weekend in time for the Bill to receive its royal assent at the start of next week. 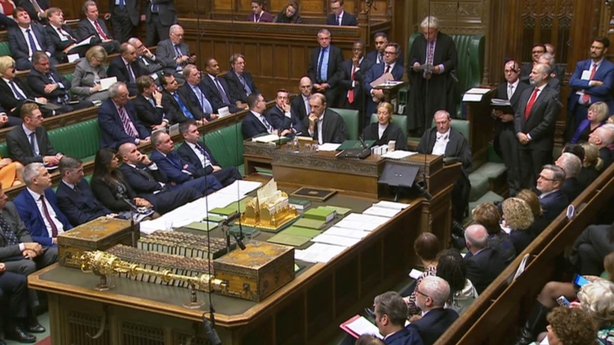 Today, Mr Bercow told the government that it could not again try to get a vote on Mr Johnson's Brexit deal because it was posing the same question to parliament twice.

Instead, Mr Bercow said, it could pursue the route of getting the legislation required for Britain's departure from the European Union through parliament first rather than having a straight 'yes or no' vote on the agreement.

"My ruling is therefore that the motion will not be debated today as it would be repetitive and disorderly to do so."

Downing Street has said the government is "disappointed" with the speaker's ruling.

The prime minister's official spokesman said they would now prefer to go ahead with the introduction of the Withdrawal Agreement Bill.

"We are disappointed that the speaker has yet again denied us the chance to deliver on the will of the British people," the spokesman said.

Ministers insist they "have the numbers" to push the Brexit agreement through, but the parliamentary situation appears to be on a tightrope.

Labour has made it clear it will try to hijack the legislation by putting down amendments for a second Brexit referendum and a customs union with the EU.

Shadow Brexit Secretary Keir Starmer indicated Labour could even back the Withdrawal Agreement if it was put to voters in a national poll against a Remain option.

Despite being forced by parliament to request a Brexit delay from Brussels after another embarrassing Commons defeat on Saturday, Mr Johnson and ministers are talking up their chances of rushing Brexit legislation through.

The move came amid reports that the EU was considering offering the UK a "flexible extension" to February, allowing it to leave whenever an agreement is secured.

Mr Johnson is striking a bullish stance as he faces another rollercoaster week in the Commons, insisting the UK will still quit the EU in 10 days time.