The UK is moving closer to the objectives of the original Northern Ireland-only backstop, RTÉ News understands.

It is also understood that the EU now believes London is prepared to accept a simple majority that would register consent for Northern Ireland to opt out of the new arrangements enshrined in a revised Withdrawal Agreement.

It is unclear if this would be a majority vote via the Stormont Assembly or even through a referendum.

The original backstop commits the UK and EU to protecting the all-Ireland economy, avoiding a hard border and related checks and controls, preserving North-South cooperation, and protecting the EU's single market.

It foresaw Northern Ireland remaining part of the EU's customs union if another solution to avoiding a hard border could not be found.

This morning, EU member states gave the green light for negotiations between the UK and European Commission to intensify.

The decision followed a briefing of EU27 ambassadors by the EU's chief Brexit negotiator, Michel Barnier.

"The EU and the UK have agreed to intensify discussions over the coming days," the European Commission said.

"The Commission will take stock with the European Parliament and Member States again on Monday in view of preparing the General Affairs Council (Article 50) on Tuesday morning."

The General Affairs Council is a meeting of EU member state ministers in Luxembourg to draw up the agenda for the European Council summit on Thursday and Friday.

Mr Barnier had earlier met the UK's Brexit Secretary, Steve Barclay, who brought fresh proposals in a bid to break the deadlock.

A senior EU source told RTÉ News: "If there is going to be an agreement we probably are moving back towards [the Joint Report of] December 2017.

"There's not another solution otherwise. By going back to that it gives the UK the ability to have independent trade deals, it protects the all Ireland economy, it makes sure you don't have a hard border, it protects the Good Friday Agreement."

It is understood, however, that Mr Barnier told members states that Britain was holding firm on the question of customs, not least because of its own legal constraints.

These constraints relate to a successful amendment tabled by Jacob Rees Mogg MP, of the hardline European Research Group, in July 2018, which prohibits Northern Ireland from being subject to different customs rules compared to the rest of the UK.

Mr Barnier's team has been in "technical talks" with British officials for some time, but these were not making enough progress towards a treaty text that could forestall a chaotic "no-deal" Brexit in three weeks.

Following the breakfast meeting with Mr Barcley, Mr Barnier briefed ambassadors from the other 27 EU capitals, seeking their input on entering political negotiations on a text.

Afterwards, diplomats said that the other member states had given Mr Barnier the green light to step up talks.

"The EU's position remains the same," the commission said.

"There must be a legally operative solution in the Withdrawal Agreement that avoids a hard border on the island of Ireland, protects the all-island economy and the Good Friday Agreement in all its dimensions, and safeguards the integrity of the single market."

It is still far from clear whether the intensive talks, taking place away from media attention, will produce a workable draft text before the key European Union summit starting on 17 October - or before Britain's exit from the EU on 31 October.

Earlier, Mr Tusk offered the British Prime Minister lukewarm hope that progress could be made, but warned that the UK has still not presented "a workable, realistic proposal".

Mr Varadkar has said that he believed the basis for intensive negotiations could be found in talks between EU and UK negotiators in Brussels.

Donald Tusk welcomed "promising signals" from the Taoiseach that a new #Brexit deal may be possible after talks between Leo Varadkar and Boris Johnson yesterday | https://t.co/FSZDP1oCr5 pic.twitter.com/I0I5oXfm8j

Northern Ireland Secretary of State Julian Smith told RTÉ News that the principle of consent in Northern Ireland "could be" an important part of any overall Brexit package.

However, Mr Smith said he refused to go into any detail on that issue, saying he would leave that to Mr Johnson.

When asked about his comments that no one party in Northern Ireland could have a veto, Mr Smith also said he was very clear about that commitments made under the Good Friday Agreement.

"What I'm committing to is that we are not going to have one party having a veto over any element of this situation," Mr Smith told BBC Northern Ireland last night.

"There will not be a situation where one community has a veto over this," says @JulianSmithUK on #bbctheview pic.twitter.com/Bz9yeIJPVO

"What I'm really positive about is that both governments seem to be on track to coming towards an accommodation ... The Prime Minister has always been committed to a deal and what we saw today of both sides was taking the time to ensure that a deal is now a distinct possibility."

"There is a huge opportunity just to get on with this. People are crying out for local political leaders to take the leap. If they take the leap, I, and the British government and the Irish Government will support them in any way we can."

DUP leader, Arlene Foster said her party will " only ever consider supporting arrangements that are in Northern Ireland's long-term economic and constitutional interests".

In a statement this evening, she said British Prime Minister Boris Johnson "is aware of our views".

She said: "We have been consistent in our opposition to the backstop, whether UK or NI only, and anything that traps Northern Ireland in the European Union, whether Single Market or Customs Union, as the rest of the United Kingdom leaves will not have our support."

Ms Foster said her party "has always indicated that the United Kingdom must leave the EU as one nation and in so doing that no barriers to trade are erected within the UK".

Sinn Féin leader Mary Lou McDonald said she welcomed the prospects of a breakthrough, but said any agreement must not include a DUP veto.

Ms McDonald said the bottom line was that any deal struck must have legal and enduring guarantees that see no hard border or any damage to the Good Friday Agreement.

She also said it would be unthinkable to place the livelihoods, the economy and Irish peace in the hands of the DUP Brexiteers.

Asked about the prospect of Stormont, which has not sat for almost 1,000 days, playing a part in any deal, she said the issues holding it back could be resolved, but she said it was up to London and the DUP to see sense. 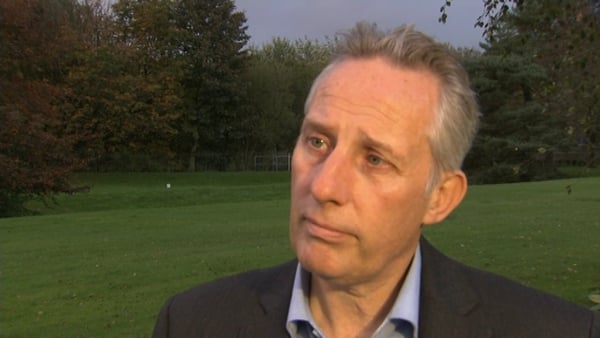