Brexit talks are progressing with "momentum", Britain's Brexit Minister said after meeting his EU counterpart, despite warnings from Europe that a deal is still some way off.

After talks in Brussels with EU chief negotiator Michel Barnier, Stephen Barclay said there was a "shared sense of purpose" to reach an agreement and avoid Britain crashing out of the EU without a divorce deal.

Britain is racing toward its 31 October departure without an exit agreement and faces the threat of economic disruption that the government admits could cause food shortages and spark civil unrest.

Mr Barclay and Mr Barnier discussed three papers submitted by London with ideas on replacing the backstop provisions in the Brexit deal struck last year but rejected by British MPs.

"There is significant work still to do but there are serious discussions that are taking place," Mr Barclay said after the talks.

"We are moving forward with momentum, talks will continue next week between the technical teams."

But the European Commission, which leads Brexit talks for the remaining 27 member states, gave a more sober assessment, stressing that the British papers amounted to no more than "a first set of concepts, principles and ideas".

Mr Barnier said: "Brexit is a school of patience but we are still ready to reach an agreement.

Mr Barnier said the work on Brexit would continue with "full respect" to the UK "our partner and ally". 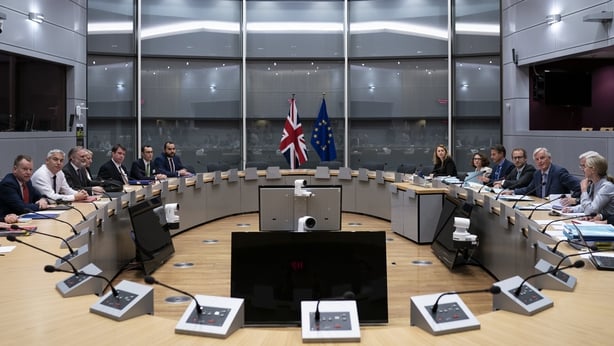 But he added: "The EU will remain vigilant and continue to apply all EU principles and values."

And there was further pessimism from Tánaiste Simon Coveney, who told BBC radio that while the "mood music" around talks had improved, a deal was still "not close" and British proposals so far were inadequate.

British Prime Minister Boris Johnson insists the backstop, which would temporarily keep Britain in the EU's customs union to avoid a hard border in Ireland, is undemocratic and unacceptable to London.

But Britain has so far not come up with an alternative that satisfies Brussels or Dublin, and after today's talks the commission once again called on London to come up with substantial proposals, suggesting the papers submitted fall short of what is required.

"It is essential that there is a fully workable and legally operational solution included in the Withdrawal Agreement," the commission said.

"We remain willing and open to examine any such proposals that meet all the objectives of the backstop."

The commission's emphasis on the need for any alternative plan to fully replicate the backstop goes against Mr Barclay's suggestion in a speech in Madrid this week that such a solution was impossible.

He accused the commission of "seeking a purist, identical result" and suggested the deadline for working out a backstop alternative could be pushed back to December 2020.

The EU has called for a clear alternative well before Mr Johnson attends a potentially decisive leaders' summit in Brussels on 17-18 October.

After a diplomatic push this week which included talks with Commission chief Jean-Claude Juncker in Luxembourg, Mr Johnson will meet with EU Council President Donald Tusk on Monday afternoon on the sidelines of the UN General Assembly in New York.