British Prime Minister Boris Johnson has denied lying to Queen Elizabeth over the suspension of parliament, insisting such claims were "absolutely not" true.

When asked whether he lied to the monarch after the Court of Session in Edinburgh said advice given by ministers to the Queen that led to the five-week prorogation was "unlawful", Mr Johnson said: "Absolutely not.

"The High Court in England plainly agrees with us but the Supreme Court will have to decide.

"We need a Queen's Speech, we need to get on and do all sorts of things at a national level."

He added: "Parliament will have time both before and after that crucial [EU] summit on October 17th and 18th to talk about the Brexit deal.

"I'm very hopeful that we will get a deal, as I say, at that crucial summit. We're working very hard - I've been around the European capitals talking to our friends.

Mr Johnson made the comments as he visited NLV Pharos, a lighthouse tender, which is moored alongside HMS Belfast on the River Thames. 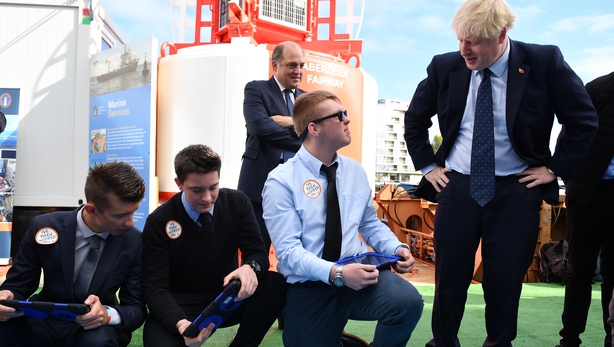 Mr Johnson is facing renewed pressure to recall parliament after he was forced to reveal that a no-deal Brexit could trigger medical shortages, food price rises and make avoiding a hard border in Northern Ireland "unsustainable".

The opposition has seized on the release of Operation Yellowhammer assessments of the impact of leaving the EU without an agreement to insist MPs return to Westminster.

It comes after Scottish judges branded the suspension of Parliament "unlawful".

While releasing analysis on impacts of no deal, the UK government refused to comply with a similar Commons demand to make public personal messages from special advisers regarding the controversial five-week prorogation of parliament.

The move came as judgment was due today in a legal challenge that argued the Government's Brexit strategy will damage the Northern Ireland peace process.

The "reasonable worst-case planning assessments" of a no-deal exit, which were released at the demand of MPs, showed that major hold-ups at channel ports could occur, along with "significant" electricity price rises and a return to a hard border in Northern Ireland.

The analysis indicated that the aim of avoiding a hard border may be "unsustainable".

On food, the document warned that some fresh supplies will decrease and that "critical dependencies for the food chain" such as key ingredients "may be in shorter supply".

It said these factors would not lead to overall food shortages "but will reduce the availability and choice of products and will increase price, which could impact vulnerable groups".

The document also said: "Low-income groups will be disproportionately affected by any price rises in food and fuel."

The analysis said that the flow of cross-Channel goods could be reduced to 40% of current rates on day one, with "significant disruption lasting up to six months".

The document is very similar to one leaked last month, which the British government insisted was out of date.

The leaked information was marked a "base case" scenario, but the information released by the government, part of which was redacted, was labelled a "worst-case scenario".

Speaking on RTÉ's Morning Ireland, Labour MP Hilary Benn said the Operation Yellowhammer report was "shocking" in its assessment of how a no-deal Brexit would affect all parts of the UK.

Mr Benn, who is Chair of the Brexit Select Committee, said it was "scarcely believable" that the UK government was setting out the potential consequences of a policy that it was "prepared to inflict on the British people if it doesn’t get a deal".

He said it was right the British parliament stood on the side of the people last week.

Mr Benn said the majority of Labour want to see the UK remain in the EU and is in favour of going back to the people with a "confirmatory referendum", which he describes as a position of compromise.

"It is the way to resolve the crisis, parliament remains deadlocked and we cannot carry on like this," he said.

Scottish court ruling on suspension of UK Paliament - former Attorney General (and Tory rebel) Dominic Grieve says if BorisJohnson is found to have misled the Queen on the reasons to suspend the sitting, then he should resign.

Shadow Brexit secretary Keir Starmer said: "These documents confirm the severe risks of a no-deal Brexit, which Labour has worked so hard to block.

"It is also now more important than ever that parliament is recalled and has the opportunity to scrutinise these documents and take all steps necessary to stop no deal."

The document was released following a House of Commons motion, but a motion demanding the release of personal information was attacked by the government.

In a letter to former attorney general Dominic Grieve, Chancellor of the Duchy of Lancaster Michael Gove, who is overseeing no-deal planning, said the government was opposed to releasing electronic communications issued by named civil servants and government special advisers regarding the suspension of parliament.