The European Council President, Donald Tusk, has said a letter sent to him by British Prime Minister Boris Johnson included no "realistic alternatives" to the backstop.

"The backstop is an insurance to avoid a hard border on the island of Ireland unless and until an alternative is found," Mr Tusk said in a tweet.

"Those against the backstop and not proposing realistic alternatives in fact support re-establishing a border. Even if they do not admit it."

In the letter to Mr Tusk last night, Mr Johnson outlined his opposition to the backstop element of the Withdrawal Agreement.

He said the British government’s "highest priority" remains to leave with a deal, but this could not happen if the backstop remains part of the Withdrawal Agreement, which he said was "anti-democratic and inconsistent with the sovereignty of the UK as a state".

The backstop is an insurance to avoid a hard border on the island of Ireland unless and until an alternative is found. Those against the backstop and not proposing realistic alternatives in fact support reestablishing a border. Even if they do not admit it.

In a note circulated to diplomats from the EU27, officials describe points made by Mr Johnson in his letter as "misleading" and "incorrect".

The EU document takes issue with Mr Johnson's claims about the Good Friday Agreement and the border.

The briefing note said the Withdrawal Agreement "fully respects the Good Friday (Belfast) Agreement, the constitutional status of Northern Ireland and the territorial integrity of the United Kingdom".

The note continues: "The letter's suggestion that two separate legal, political, economic, and monetary jurisdictions already exist on the island and can be managed with an open border is misleading.

"EU law provides the common framework needed to enable frictionless trade between member states today. Without this common framework, checks and controls become necessary to protect consumers' health, the integrity of the single market and Ireland's place in it." 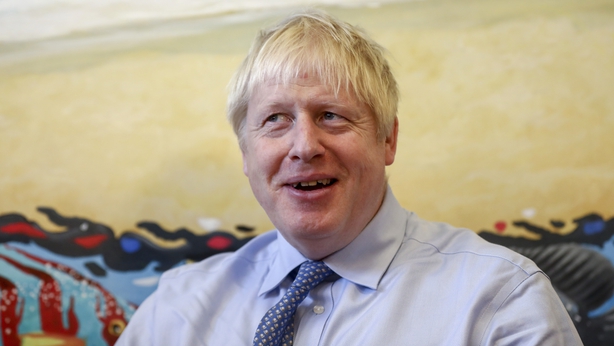 This evening, Mr Johnson said the European Union was being "a bit negative" about the prospects of reaching a Brexit deal but said he believed it can be done.

"At the moment it is absolutely true that our friends and partners are a bit negative ... but I think we'll get there," Mr Johnson told reporters.

"I think there is a real sense now that something needs to be done with this backstop.

"We think there's a big opportunity now for everybody to come together, take out that backstop and then ... in the course of the negotiations on the free trade deal ... which we're going to do after 31 October, we will be bringing forward all the ways in which we can maintain frictionless trade at the Northern Irish border."

The European Parliament's Brexit co-ordinator Guy Verhofstadt said in a tweet that the "time for bluster & political blame games is fast running out".

I don't see any majority in the @Europarl_EN to remove the backstop from the Withdrawal Agreement. It is a vital insurance policy, negotiated in good faith & supported by the people of the Island of Ireland. The time for bluster & political blame games is fast running out.

German Chancellor Angela Merkel said the EU would think about practical solutions regarding the post-Brexit border, but not by revisiting the Withdrawal Agreement.

"The moment we have a practical arrangement on how to preserve the Good Friday Agreement and at the same time define the borders of the (European Union's) internal market, we would not need the backstop anymore," Ms Merkel told a news conference during a visit to Iceland.

"This means we would naturally think about practical solutions. And I've always said that when one has the will to find these solutions, one can do so in a short period of time. The EU is ready to find a solution."

She said this would not require the Withdrawal Agreement to be re-opened and was instead a question of the political declaration on future ties.

Mr Coveney reiterated to him Ireland's desire to have an orderly exit and also conveyed disappointment over Mr Johnson's letter to Mr Tusk.

During the call, Mr Coveney also made it clear that the backstop was designed to protect the Good Friday Agreement.

Mr Coveney will be in Northern Ireland this evening where he will meet Secretary of State Julian Smith.

Meanwhile, the chairman of the Seanad's Brexit committee has said Mr Johnson's letter is "worrying" in its description of the backstop as anti-democratic.

He said: "I completely reject that out of hand. The backstop is there to protect the Good Friday Agreement, it is not a threat to it. And it's very worrying to hear him use a term like anti-democratic.

"The backstop was agreed to by a democratically elected British government. He himself voted for the backstop at the last vote in parliament as part of the wider Withdrawal Agreement.

"The backstop protects the Good Friday Agreement, both the Irish and British governments have that responsibility as co-guarantors and of course the entire European Union backs that position."

Senator Richmond also said that Mr Johnson did not give any indication as to what his alternative arrangement to the backstop would be in his phone call to Taoiseach Leo Varadkar last night.