The British government minister tasked with preparing for a no-deal Brexit has said in the event of that scenario, the British government will make sure that it will safeguard the security of the people on the island of Ireland and that trade continues to flow as freely as possible.

Michael Gove is in Northern Ireland for a series of meetings with business leaders.

He was speaking at Warrenpoint Port in Co Down where a number of businesses in the town have been stockpiling raw materials because of uncertainty around Brexit.

Mr Gove was pressed on why Boris Johnson had not accepted Leo Varadkar's invitation to discuss the Brexit impasse face-to-face.

He said: "I think the Prime Minister has talked to the Taoiseach and there are links at every level between the UK Government and the government in the Irish Republic.

"We have very good bilateral relations and of course we are also talking to other EU partners as well.

"In the event of a no-deal then naturally there will be issues to be addressed, not just security but trade issues as well.

"We will make sure that we safeguard the security of the people on the island of Ireland and we will also make sure that trade continues to flow as freely as possible."

During his visit, Mr Gove was asked to respond to Mr Varadkar's claim that a no-deal Brexit will not enable the UK to leapfrog unresolved issues to negotiate a free trade agreement with the EU.

The Taoiseach said in the wake of a no-deal, talks on a future trading relationship would still not begin until matters in the current withdrawal agreement - such as citizens' rights, the financial settlement and the border - were resolved.

"I think the Taoiseach is understandably making clear what he believes is in the interests not just of the Irish government, people on the island of Ireland, the European Union and in the UK as well," said Mr Gove.

"One of the things I am here to do is make sure I develop an even deeper understanding, issue by issue, of all the things we need to do in order to safeguard trade, jobs and prosperity across the island of Ireland and within the United Kingdom."

Mr Gove has been engaged in a war of words with the European Union this week, accusing it of intransigence and not being interested in trying to negotiate a new Withdrawal Agreement.

Warrenpoint Port is situated at the mouth of Carlingford Lough, which is just a narrow stretch of water across from Co Louth.

Constructed in the 1770s, it is the second busiest port in Northern Ireland.

Its chief executive said they discussed the dangers of a no-deal Brexit to the community. 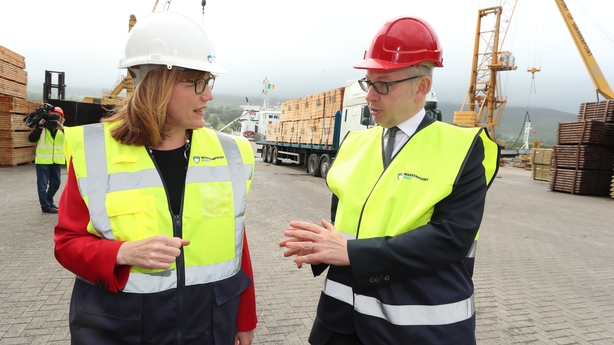 Clare Guinness said: "During a robust exchange of views, we pressed home to the minister the concerns not just of the port, but of the wider business community of the dangers posed by a 'no deal' Brexit.

"As a key driver for economic growth locally, we consider it vital for the prosperity of the entire Northern Ireland economy that that trade is able to continue to flow and grow.

"That requires a border that is frictionless and for us that means no barrier either on the island of Ireland or in the Irish Sea so that our economy can continue to enjoy the open trade we have done for many years.

"We are yet to receive assurances that any of this is possible under a 'no deal'."

Elsewhere, Downing Street has cancelled all leave for government advisers in the run up to Britain's withdrawal from the EU on 31 October.

Boris Johnson's chief strategic adviser Edward Lister emailed all special advisers yesterday informing them that no holidays should be booked until the end of October.

The move is likely to fuel speculation that ministers are preparing the ground for a general election after MPs return to Westminster in September.

In his email, seen by The Guardian, Mr Lister told staff there had been "some confusion about taking holiday".

He said no leave should be booked until 31 October and that compensation would be considered "on case by case basis" for those who already had holidays booked.

"There is serious work to be done between now and October 31 and we should be focused on the job," the email said.