There are concerns that one of the country’s main ports is not prepared for Brexit, despite Government plans for a €45 million improvement scheme.

Rosslare Europort provides ferry links between Ireland and the Welsh ports of Fishguard and Pembroke.

Plans have been announced by the Office of Public Works for a new customs facility at the port, as well as upgraded revenue, agriculture and immigration controls.

Glen Carr, General Manager of the CIE-operated port, said that given up to 70% of goods transported through Rosslare are agricultural and food produce, it is essential that a border inspection post is built.

Speaking on RTÉ’s Morning Ireland, Mr Carr said it has been envisioned that this would take between two and a half and three years to build.

He added that the design phase for the facility has been completed with the OPW, and the planning phase is set to begin.

"I think the congestion is going to be our biggest fear. There isn’t enough room to accommodate the vehicles coming in"

However, concerns have been raised over when this facility would actually be ready for use by hauliers.

Damian Roche, of the Rosslare-based Roche Logistics group, said he is very concerned about delays while the facility is built.

"I think the congestion is going to be our biggest fear. There isn’t enough room to accommodate the vehicles coming in," he said.

He also expressed doubts about the availability of staff for the potential facility.

These concerns were echoed by a local Independent councillor.

Ger Carthy told Morning Ireland that he would suspect Rosslare is not very prepared for Brexit.

"There has been neglect for a number of decades in relation to investment in the port," he said. 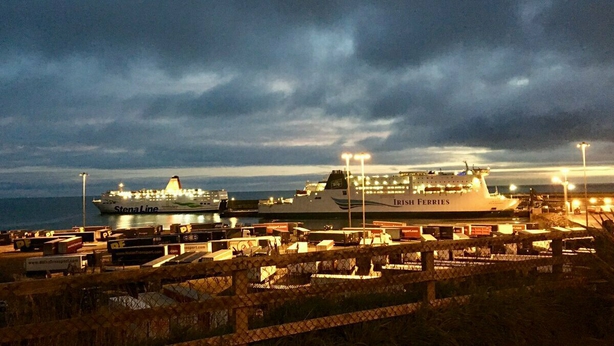 "I am aware that there are talks that the OPW are due to invest in customs and excise clearing and agricultural inspection points, but we are a long way from delivery of that because it is not even in the planning process."

"As we stand in Rosslare Harbour there is no sign of any activity in that context."

Cllr Carthy added that in addition to the expansion of customs facilities, a new link road is required out of the port.