Former British foreign secretary Boris Johnson has criticised the backstop proposal in the Brexit agreement, but said the UK does not want a hard border on the island of Ireland.

Speaking to RTÉ News, Mr Johnson said that although he is opposed to the deal, it does not mean he favours crashing out of the European Union.

When asked if he appreciated the concerns on both sides of the border, Mr Johnson said: "People in the UK deeply understand the sensitivities about the border, but we are fortified by what [Taoiseach] Leo Varadkar and many others have said in not wanting a hard border.

"We don't [want] and we will not see a hard border. That would not be right.

"There are other solutions ... and we should use that [transition] period, which was called the implementation period, a period of standstill, after we come out to negotiate not just the Canada-style trade deal but also to bring in those technical solutions."

The UK is scheduled to leave the EU on 29 March and British Prime Minister Theresa May faces a crucial parliamentary vote on her Withdrawal Agreement next week.

Parliament is divided on the issue and a previous vote on the issue was delayed in December, with concern over the backstop.

Mr Johnson said that while he would like to see an extension of the existing arrangements after 29 March on a bilateral basis between the UK and EU, he would not be in favour of an extension of Article 50.

He said: "We would still come out but what you agree is that, subject to approval by the WTO, what you would try to do is protract the existing arrangements.

"So you have a zero tariff, zero quota arrangement for as long as it takes to get a free trade deal done."

Earlier, he told the Pendulum Business and Self Empowerment Summit in Dublin that the UK and the Republic of Ireland "should be bold and brave together" over the border issue.

Mr Johnson said: "No matter what nonsense the prophets of doom may talk about the risks of new sanitary checks on livestock or hold up on the border in the event of Brexit, I know that together we can organise it in the interests of our business.

"I think if we can get it right together over the next few months, as I am absolutely sure we can, that the pendulum will swing again as it always does, away from this temporary gloom towards a new spirit of Anglo-Irish optimism and self-confidence and when it does, it will be the entrepreneurs, yourselves included, that we will have to thank."

Mr Johnson, who resigned as foreign secretary over the Chequers agreement last summer, claimed that the so-called Project Fear is being used to keep the UK in the customs union and to "make a nonsense" of Brexit. 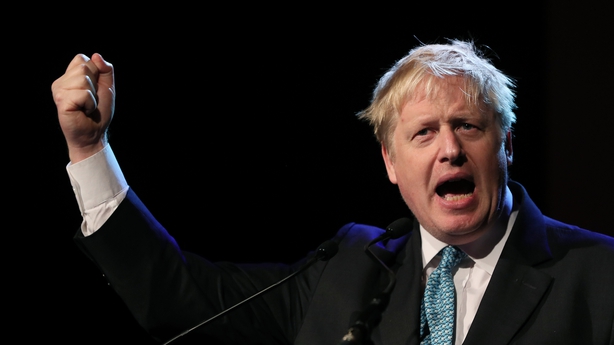 He said: "Whatever you may think about what people voted for, at present the arguments, the whole Project Fear stuff is being used to keep the UK in the customs union, in the single market and therefore really to make a nonsense of leaving the EU.

"Nobody, not in Dublin, not in London, not in Brussels, no one wants a hard border in Northern Ireland.