Tánaiste and Minister for Foreign Affairs Simon Coveney has said that if there is to be a deal on the Brexit Withdrawal Agreement in November, then there will have to be movement from the British side by next week at the latest.

Earlier, it was reported that Brexit Secretary Dominic Raab had written to a House of Commons committee that a deal could be reached by 21 November.

Speaking in Paris following a meeting with the French foreign minister, Mr Coveney said he thought a deal could be reached in November.

However, he said that the UK  would have to sign up to commitments it had made on the Irish backstop last December.

Downing Street has so far said only that it is working to conclude a deal "as soon as possible", and hopes to do so during the autumn.

However Mr Raab told a cross-party committee of MPs that the end of negotiations, which have stretched on for 19 months, was now "firmly in sight".

The October summit of the European Council - long-billed as the "moment of truth" for Brexit negotiations - passed without a deal, and leaders of the remaining 27 EU countries decided not to schedule a special summit in November unless chief negotiator Michel Barnier told them there had been "decisive" progress in talks.

Mr Raab appeared to suggest that he expected a deal within the next three weeks, as he set a date for himself and negotiator Olly Robbins to appear before the House of Commons Exiting the EU Committee.

"I would be happy to give evidence to the committee when a deal is finished and currently expect November 21 to be suitable," wrote Mr Raab. 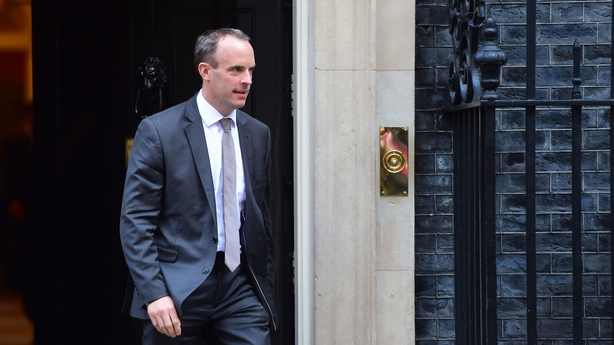 The letter, which was released by the committee, was dated 24 October and therefore does not reflect any breakthrough in the past few days.

The Department for Exiting the European Union later clarified that "there is no set date for the negotiations to conclude" and 21 November "was the date offered by the chair of the select committee for the secretary of state to give evidence".

Deadlock in talks over Irish backstop

Negotiations are deadlocked on the question of the backstop arrangement to guarantee that there will be no hard border in Ireland.

British Prime Minister Theresa May insists she will not accept an EU proposal which would establish a customs border between Northern Ireland and the British mainland, while Brussels is resisting her plan to keep the whole UK temporarily in a customs union.

Mr Raab wrote: "Despite our differences, we are not far from an agreement on this issue. We agree on the principle of a UK-wide customs backstop. An agreement on the details of that backstop should be possible.

"Both sides agree that this backstop cannot provide for a permanent UK/EU relationship and are committed to a future relationship that works for the whole of the UK, including Northern Ireland.

"We are open to talking about ways to achieve this and committed to continuing discussions in order to reach an agreement.

"The end is now firmly in sight and, while obstacles remain, it cannot be beyond us to navigate them. We have resolved most of the issues and we are building up together what the future relationship should look like and making real progress.

"We now need to acknowledge the progress that has been made and now work rapidly through the remaining issues and come to an agreement that works for both sides."

Mr Raab had been due to give evidence to the committee on 24 October, but pulled out shortly before the crunch 17-18  October European Council summit, with his office saying that he was committed to appear only once a deal was finalised.

In a letter accepting his proposal of a 21 November evidence session, committee chair Hilary Benn said he was "disappointed" with the new Brexit Secretary's failure to follow the pattern of regular updates established by his predecessor David Davis.

And he rejected as "not sufficient or effective" Mr Raab's proposal that he could update the committee by letter until the deal was agreed.

"Having been a member of this committee, you will know that this is not how committees undertake inquiries and is not conducive to scrutiny," said Mr Benn.

With Mr Barnier meeting "almost daily" with European Parliament representatives, the Government was failing to live up to Mr Davis's promise to match the EU negotiator for openness, Mr Benn said.

Tánaiste warns of EU scepticism over UK plan on customs