Speaking after a meeting between a DUP delegation and members of the EU Task Force, led by Michel Barnier, Mrs Foster said the EU did not have the right to "go into the Belfast Agreement" to facilitate what she called "new powers" relating to north-south cooperation.

This morning, a DUP delegation involving Mrs Foster, as well as the Brexit spokesman Sammy Wilson, Nigel Dodds and Diane Dodds MEP, met Mr Barnier for around an hour in the European Commission.

Mrs Foster described the meeting as "open and constructive".

She said last week's draft withdrawal treaty, which contains a protocol on Ireland, was not a "faithful or fair translation" of last December's agreement between the EU and UK on how to avoid a hard border.

She said that too much prominence was given to the so-called backstop solution, or Option C, which foresees Northern Ireland effectively remaining in the customs union for the movement of goods, and in the single market for other potential aspects of north-south cooperation.

The party believes that the so-called options A and B, which frame the solution within a future free trade agreement, and which the British government prefers, should be fully reflected in the treaty. 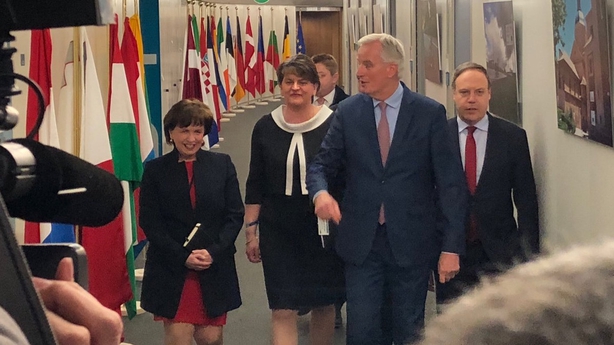 In last week's draft, only the backstop option is enshrined in legal terms, although the text says that if other solutions are found then Option C will not apply.

Both the EU and the Government have urged London to come up with solutions that would not undermine the EU's internal market or customs union.

The DUP leader said the British government had produced workable solutions last August on how to maintain a frictionless border.

"The joint report in its totality needs to be reflected in the legal text from the EU and we will continue to make that point through the British government".

Mr Dodds said the draft text drove a coach and horses both through the EU's own principles and the Good Friday Agreement.

"It is driving a coach and horses through the EU's own principles about no hard borders.

"While EU Task Force talks about respecting and wanting to protect the Belfast agreement, the proposals also drive a coach and horses through the principle of consent".

Mr Wilson said the delegation informed Mr Barnier that if there were any checks between the island of Ireland and the UK, it would "do severe damage to the Irish economy because the biggest market which the Irish economy has is the UK market. A proposal of that nature wasn't doing any favours to the Irish".

He added: "In terms of solutions, [Mr Barnier] said he wanted to be pragmatic. We made the point then that they should stop flippantly dismissing some of the very practical solutions put forward by the [British] government last August and which had not been explored".

At the time, the British proposals, which included the use of technology, trusted trader schemes and customs exemptions for SME's were dismissed by a senior EU official as "magical thinking".