The Taoiseach has said European Union leaders are finding it hard to understand the UK's position on Brexit due to mixed messages from the country.

In an interview with the BBC's Spotlight programme, Leo Varadkar said the ambiguity meant the other 27 nations in the EU are struggling to grasp what the UK wants from negotiations.

Mr Varadkar said: "It's still not clear what the UK actually wants in terms of a new relationship, because on the one hand it seems that the UK wants to have a close trading relationship with Europe like it has now.

"But it also seems to want something different, and it is very hard for us as European prime ministers to understand exactly what the UK wants the new relationship to look like.

"It certainly can't be, and I think anyone will understand it can't be, having all the benefits of EU membership but none of the responsibilities and none of the costs.

"If you join a club, you obey the rules and you pay the membership fee."

EU leaders are due to meet at a summit on Thursday and Friday, during which the UK's Brexit proposals will be discussed.

UK Prime Minister Theresa May is due to outline developments in her Brexit plans, and is expected to argue that sufficient progress has been made in talks for them to continue to the next stage.

After she leaves on Friday, the 27 leaders will then hold a separate meeting on the UK's withdrawal plans.

The UK has previously been criticised by EU leaders over claims that the country's Brexit plans lack sufficient depth or detail.

The UK Government has denied this, with Foreign Secretary Boris Johnson this week urging the EU to "get on" with talks to ensure timely progress is made.

An European Commissioner has warned that we face the "cliff edge of a hard Brexit", with hard Brexiteers "hooked on brinkmanship" and hoping to "bully" their way to victory in negotiations.

Speaking in Brussels this evening, EU Agriculture Commissioner Phil Hogan warned that in the UK debate on Brexit, "common sense left the building a while ago".

"We have now missed the October deadline, in my view, for moving onto the next phase," Mr Hogan said, lamenting that "facts and details are derided by the Brexiteers".

"It is painfully clear that the UK government is not going to propose workable solutions for the benefit for the island of Ireland. Indeed, the low priority afforded to Northern Ireland by London is very disheartening."

He condemned Brexiteers who, he said, were "hooked on brinkmanship and have been since the beginning. Unfortunately their only approach is the tough guy approach."

Mr Hogan also accused them of trying to "bully their way to the wire" in the hope that the Commission's "nerve will crack".

The commissioner cautioned that this was not how the EU worked, adding that EU negotiators reflect the view of elected governments and MEPs. 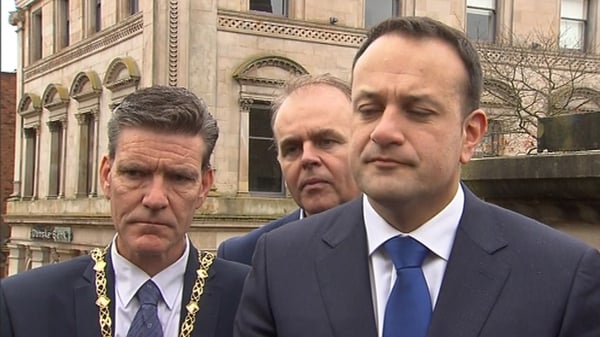 Varadkar expects leaders to say progress not made in Brexit talks