British Prime Minister Theresa May has proposed a two-year transition period for the UK after its leaves the EU, suggesting that Britain would continue to "honour its commitments" under the bloc's current budget.

Mrs May delivered a keynote speech in Florence outlining the Brexit process and the future relationship between the European Union and the United Kingdom.

Mrs May said it is in everyone's interests to find a creative solution on a future trading relationship with the European Union.

She confirmed that the UK intends to leave both the single market and customs union, but said it was in an "unprecedented" position to forge a new trading relationship. 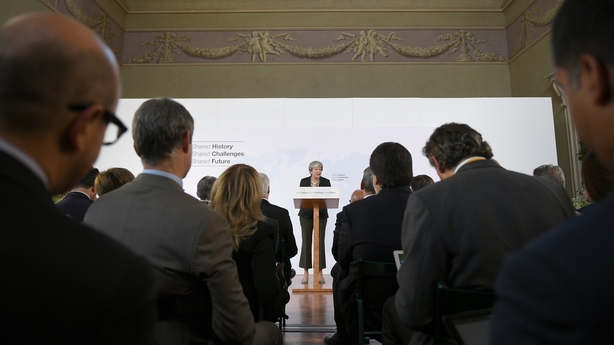 She proposed a two-year transition period for the UK after its leaves the EU.

Neither the European Economic Area relationship enjoyed by countries like Norway nor a Canadian-style free trade agreement would be "best for the UK or best for the EU", she said, adding: "We can do so much better than that."

She called on European leaders and institutions to be "creative" in designing a new economic partnership with the UK and said there was good justification for this level of "ambition and optimism", because of the close existing links and shared values between Britain and the EU and the EU's record of forging creative agreements with countries outside the union.

Theresa May: 'We and the EU have committed to protecting the Belfast Agreement and the Common Travel area' pic.twitter.com/SJYDE8XM9j

The Conservative leader said everything would be done to avoid friction at the borders.

Mrs May said there are "unique issues to consider when it comes to Northern Ireland".

She said the British and Irish governments, and the EU as a whole, have made it clear that progress made in Northern Ireland in recent years would be protected.

"We and the EU have committed to protecting the Belfast Agreement and the Common Travel area," she said.

"Looking ahead we have both stated explicitly that we will not accept any physical infrastructure at the border.

"We owe it to the people of Northern Ireland, and indeed to everyone on the island of Ireland, to see through these commitments," she added.

She also said that European Commission president Jean-Claude Juncker's state of the union address had last week sparked "vibrant debate" about the future of the EU.

And she added: "We don't want to stand in the way of that. Indeed we want to be your strongest friend and partner as the EU and the UK thrive side by side."

British Prime Minister Theresa May says the EU is beginning a 'new chapter in the story of its development' pic.twitter.com/qHvU7HV1j1

Mrs May said that a Brexit implementation period would last for around two years.

"During the implementation period, people will continue to be able to come and live and work in the UK but there will be a registration system, an essential preparation for the new regime," she said.

"As of today, these considerations point to a implementation period of around two years," she added.

The EU's chief Brexit negotiator Michel Barnier welcomed Mrs May's speech "saying it expressed a constructive spirit which is also the spirit of the European Union during this unique negotiation".

He said Mrs May's statements are a step forward but they must now be translated into a precise negotiating position of the UK government.

"With regard to Ireland, the United Kingdom is the co-guarantor of the Good Friday Agreement. Today's speech does not clarify how the UK intends to honour its special responsibility for the consequences of its withdrawal for Ireland.

"Our objective is to preserve the Good Friday Agreement in all its dimensions, as well as the integrity of the Single Market and the Customs Union," said Mr Barnier.

"The United Kingdom recognises that no member state will have to pay more or receive less because of Brexit. We stand ready to discuss the concrete implications of this pledge," said Mr Barnier.

He added: "The EU will continue to insist on sufficient progress in the key areas of the orderly withdrawal of the United Kingdom before opening discussions on the future relationship.

"Agreeing on the essential principles in these areas will create the trust that is needed for us to build a future relationship together."

Question of Ireland must be clarified, says Macron

French President Emmanuel Macron has said that in the Brexit talks, the question of Ireland must be clarified before other issues can be tackled

He also said clarity is needed in relation to rules on the settlement of European Union citizens, and the financial terms of Britain's departure from the EU..

"Before we move forward, we want to clarify matters concerning the settlement of European citizens, the financial terms of exit and the question of Ireland," Mr Macron said in a joint briefing after a visit by the Finnish Prime Minister to Paris.

"If these three points are not clarified, we will not be able to advance on the rest," he added.

Among Mrs May's audience in the Renaissance basilica were British Foreign Secretary Boris Johnson, Chancellor Philip Hammond and Brexit Secretary David Davis, but no leaders of the 27 remaining EU states were present.

Her speech comes as an opinion poll suggested a majority of Britons now back staying in the EU, with 52% in favour of remaining part of the bloc.