The DUP leader has accused the Irish Government of trying "to ride roughshod over unionism" in its response to the latest Brexit plan submitted by the British government.

The plan submitted by British Prime Minister Boris Johnson to the European Union has a time-limited, semi-backstop. Northern Ireland would remain in the Single Market but not the Customs Union and the arrangement would be up for renewal or rejection by the Northern Assembly every four years.

When outlining his concerns about the proposals in the Dáil today, Tánaiste Simon Coveney said the Customs Union issue was a problem. He added that not one party in the Stormont Assembly could be given control of EU regulatory alignment on the island of Ireland.

In a statement, she said: "The Irish Government's majoritarian desire to ride roughshod over unionism was one of the reasons why the Withdrawal Agreement was rejected.

"Mr Coveney's rejection of a reasonable offer is paving the road for a no-deal exit because unionism will not allow Northern Ireland to be trapped at the whim of Dublin or the EU. We will not buy that."

Mrs Foster added: "The Irish Government's preparedness to dump the consent principle for their country's expediency is foolish in the extreme and sends a very clear message to unionists.

"From our 2017 manifesto to paragraph 50 of the December 2017 Joint Report, the consent of the people of Northern Ireland for specific solutions has been key.

"It is at the heart of the Belfast and St Andrews Agreements, yet the Irish foreign minister is now railing against it because it doesn't suit his agenda.

"There will be no return to the flawed backstop. We will leave the EU, Customs Union and Single Market alongside the rest of the United Kingdom."

Earlier, DUP deputy leader Nigel Dodds indicated that in a working Assembly unionists would have a veto on the issue.

Mr Coveney said if the plan by Mr Johnson to replace the backstop is the final Brexit proposal from the British government, then there will be no deal.

Speaking during Leaders' Questions in the Dáil, he said there were elements of the proposals that will not be part of a final deal including the approach on customs.

He said there were a number of fundamental problems with the plan.

However, he said he believed Mr Johnson does want a deal and the paper published yesterday was an effort to move us in a direction of a deal. 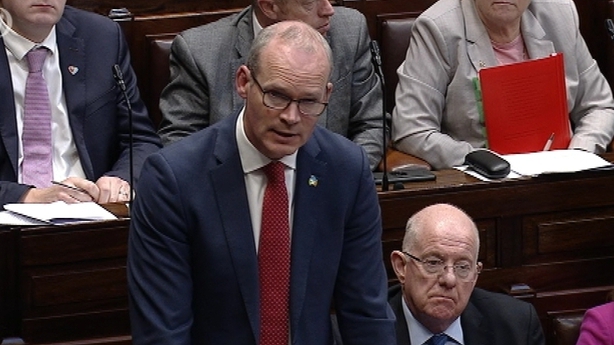 He told the Dáil there were some positives in the document including regulatory alignment for goods.

There are two significant problems, one is with customs, and it raises the prospects of customs checks which would not meet the aim of having a largely invisible border, he said.

The second issue is how an executive in Northern Ireland would be given a say in implementing these proposals, the Tanaiste said.

He was responding to Sinn Féin's Martin Kenny, who said the proposals played loose and fast with the Good Friday Agreement.

Mr Kenny said what Boris Johnson has presented is unworkable.

He said the proposals contained a DUP veto and he said that party would exercise that veto.

Fianna Fáil's deputy leader Dara Calleary said the reality is that there will be checks on the island of Ireland that would weaken the Good Friday Agreement under the new proposed Irish Protocol proposed by the British government.

Taoiseach Leo Varadkar has said claims by Mr Johnson that there would no new customs infrastructure anywhere on the island of Ireland were in contradiction with the UK paper submitted to the EU yesterday.

According to an explanatory note which accompanied the UK legal text, physical customs checks would happen at "designated locations" as well as business premises.

In the House of Commons today Mr Johnson said there would be no new infrastructure anywhere on the island of Ireland.

Following a meeting with the Swedish Prime Minister in Stockholm Mr Varadkar said: "I'm reassured by what Prime Minister Johnson said today that he's not proposing that there should be any new physical infrastructure on the island of Ireland linked to customs or customs checks, but as you pointed out ... that is actually a contradiction [of] the papers presented by the UK government yestereday.

"I think, working with the EU Task Force in particular ... and also talking to the UK government, we’ll have to tease out the detail of what those proposals mean."

The Taoiseach said there were two major obstacles to a deal, the issue of customs and the question of consent in Northern Ireland.

He said he did not understand how Northern Ireland and the Republic could be in two different customs unions and avoid having tariffs and checks on goods.

He said the issue of consent was important but any consent had to reflect the views of a majority of people in the Republic and Northern Ireland.

"We all remember the troubles, the Good Friday Agreement must not be put at risk," he said.

"The Taoiseach reassured both presidents of Ireland's commitment to protecting the EU Single Market and Customs Union, as well as protecting the Good Friday Agreement and avoiding a hard border," a spokesman said.

Mr Varadkar told the presidents that he welcomes Prime Minister Johnson's new Brexit proposals as a basis for further discussion, but that major issues remain, especially on customs, and with consent and democracy in Northern Ireland. 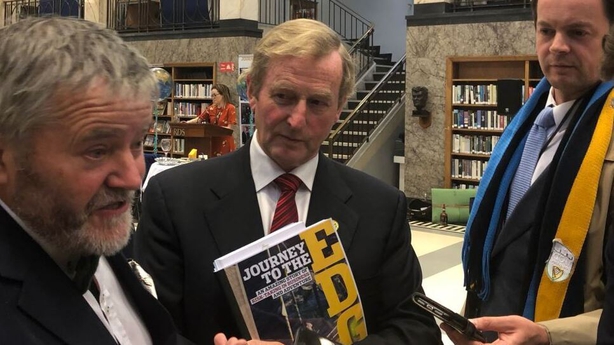 Former taoiseach Enda Kenny has said he is sure the British Government would not want to breach the Good Friday Agreement.

Speaking in Dublin this evening, he said the original principles of maintaining both that agreement and the Common Travel Area and avoiding a hard border had not changed.

European solidarity has been particularly strong in the context of Ireland and this will remain the case, Mr Kenny added.

He warned that peace and stability can never be taken for granted.

Mr Kenny, who was taoiseach at the time of the Brexit referendum, said the Government is working hard to reach an agreement.