There was an almost depressing familiarity to many of the themes in Russian President Vladimir Putin's address to the Russian nation.

Accusing the West of "nuclear blackmail" and of attempting to destroy Russia, much of what Putin had to say travelled the well-worn path of previous speeches.

But the key announcement of a partial mobilisation - which will see an estimated 300,000 military reserves called up for duty - is an explicit admission from Putin that he is not where he thought he would be at this point in the "special military operation" in Ukraine.

Russia's first mobilisation order since World War II, it was a move which had been widely anticipated, particularly after the Russian Duma sought to toughen up punishments for a host of crimes, such as desertion and insubordination.

"This is not a bluff," President Putin said, as he spoke of Russia's willingness to use all the arsenal at its disposal, a comment immediately taken as a threat to use nuclear weapons.

For those who believe Putin is not bluffing, they cite a leader increasingly vexed by an invasion of Ukraine which has gone spectacularly wrong. 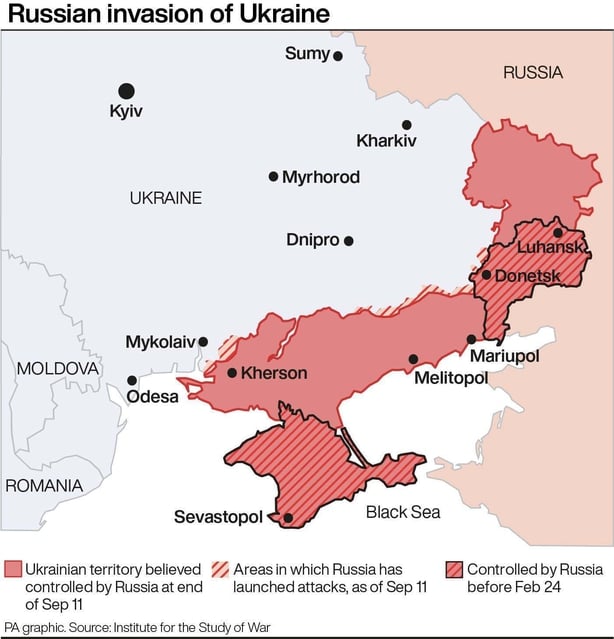 Angered by lightning gains by Ukrainian forces in recent weeks and embarrassed by the retreat of the Russian army, the unpredictability of the situation brings a heightened danger.

For others, this is simply a doubling down by Putin in the hope that Western unity in the face of the Ukrainian invasion can be broken with threats of nuclear action, as well as the inevitable difficulties in the winter ahead as the energy crisis bites ever deeper.

But for a leader who has spent 20 years in power in Russia, consolidating his position year on year, Putin's current options look out of character.

They appear erratic, an unusual position for which such a calculating politician.

Mobilisation is something which Putin has resisted until now.

Firstly, there will have been concerns about the response of the general Russian population to such a move.

Supporting Putin's actions in Ukraine is one thing – fighting and dying for those actions is quite another.

The move in the Russian Duma to toughen laws for those who desert or refuse to fight could also be seen as a tacit admission that the Kremlin is certainly not convinced about the desire of the broader population to fight.

As Russian troops were routed by Ukrainian forces in recent days, traditional supporters of Vladimir Putin had clearly made known their worries about the war.

In Uzbekistan for the Shanghai Co-Operation Organisation summit, Putin himself acknowledged the concerns and worries of the Chinese President Xi Jinping at the war, while India’s President Narendra Modi appealed for a peaceful resolution to be found.

If Putin is feeling more isolated by his customary partners, it is yet another pressure in a situation which the Kremlin anticipated having a very different outcome.

Seven months into this war, there is no end in sight.

The mobilisation order underscores that, but it was already becoming obvious in Russia.

Comments from Russian singer Alla Pugacheva denouncing the war for its "illusory aims" were considered a thunderbolt this weekend.

An icon of Soviet pop music who is revered across generations, her comments were the most public and high profile condemnation of Putin's actions which had, she said, turned Russia into a global pariah.

Dissent is dangerous and rare in Russia, as Ms Pugacheva's husband knows. Comedian Max Galkin was classified as a "foreign agent" earlier this month.

Ms Pugacheva's request that she also be added to that list alongside him suggested that the fear of being labelled a traitor to the motherland may not, for some at least, hold the fear it once did.

In the coming days, referenda will take place in occupied areas of four Ukrainian regions to assess on joining Russia.

With no expectation that the votes will be a festival of democracy, they have already been denounced by Western leaders.

But it is another indication, as is Putin's speech and decision on mobilisation, that something must be done to try and bolster a military operation which has run into severe trouble.

Whether these moves suggest escalation or desperation on the part of the Kremlin will only become clear in the febrile days ahead.

And it must also be remembered that escalation and desperation are not mutually exclusive.