Something strange is happening politically.

The mood has rarely been as elusive to define since this pandemic began.

In many ways it feels like hope and uncertainty are being voiced in the same pitch.

Talk of tangible progress is fused with warnings about the need for ongoing caution.

Caution that could run all the way to the autumn where the wearing of face masks might still be required in certain settings, the Health Minister said.

There were warnings aplenty too.

At the gates of Leinster House today dozens of pilots demonstrated.

Their call was a simple one, restrictions on international travel have to be eased soon or else the aviation sector will face profound long-term damage. 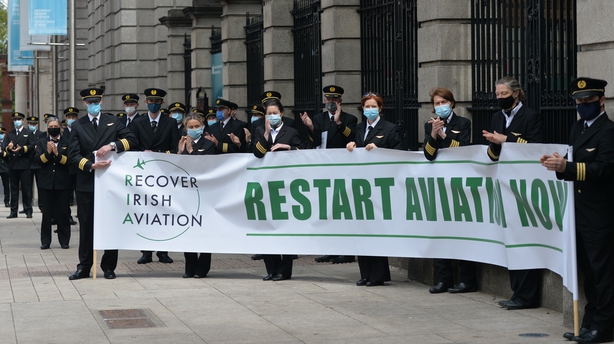 Just an hour after this protest the Seanad met to quickly debate a proposal to extend the legislation underpinning the Covid-19 retractions to the second week in November.

This does not mean the restrictions will be in place until that time but the ability to swiftly reimpose them will be retained.

The reason given by the Health Minister was that the virus is at a precarious stage.

Stephen Donnelly went to say that while the country is well ahead of the best-case scenario presented some months ago, it will still be sometime before a sufficient number of people are vaccinated.

But keeping draconian emergency powers on the statute books until November seems to be causing frustration even on the Government benches.

While Independent Senator Michael McDowell described the handling of the legislation as a scandal.

He even called for the early vaccination of all politicians to give the Dáil and Seanad more time to debate things like these emergency powers.

It was the question of time too that alarmed those working in the restaurant industry today.

This followed suggestions from the Taoiseach this morning that the resumption of indoor service in restaurants and bars may not happen until later in July. Any move to delay the reopening of indoor dining and drinking until the middle of July would heighten the prospect of legal action by restaurant owners.

This could happen once the new regulations are signed to allow hotels open for visitors take effect.

Central to any case taken by the restaurants is the distinction made between them and hotels.

"On 2 June Ireland will be the first country in Europe to permit hotel restaurants to open for guests whilst at the same time prohibiting indoor dining for restaurants, cafes, gastro pubs and food service establishments,"

Last week the Tánaiste expressed his hope that indoor dining would return in early July.

Many within Government believe this would be just about be acceptable to restaurant and bar owners.

However, indications from the Taoiseach on the Today with Claire Byrne programme raised the possibility that it might be mid-July before this happens.

"For the summer outdoor is best, bottom line and indoor has been challenging for this virus," he said.

The Taoiseach added that Government would see how the reopening of hotels and the return of outdoor dining and drinking impacts on the disease in June.

"If you look at what we've been doing from April and May, everything wasn't on the first week of particular months when we began to reopen... so it's a gradual approach we will be adopting... and cautious," Micheál Martin said.

The plan to reopen the country has been 'cautious' and 'gradual', but is working, Taoiseach Micheál Martin has said.

He told @TodaywithClaire travel, hospitality and live entertainment will be under consideration later this week #TodayCB | Read more: https://t.co/wLFOUZ1w12 pic.twitter.com/kZbDK7NrOZ

These comments are being parsed by his Government colleagues this evening.

Most feel that the date for the return of indoor dining has not been nailed down yet and as always much will depend on NPHET's view of the matter on Thursday evening.

There is a general sense among ministers that the cautious approach to reopening has worked and errors should be avoided.

Most of them believe the key thing is to pick a date for the return of indoor hospitality and stick to it.

Ditto the return of unimpeded international travel as part of the EU's green certificate system.

This is likely to happen at some point in July the Minister for Foreign Affairs Simon Coveney said today.

But pressure is building on the Government to move on this from early July.

The normally reticent and always astute Fine Gael Senator Paddy Burke has called for this to happen on 1 July.

Before all that outdoor dining and drinking will return on 7 June.

The new guidelines will likely mean that groups of six can meet at a table where they will not have to buy a substantial meal and they won't face a time limit.

For the Government though the clock is ticking down to the day when it must make decisions that will define the shape of the summer.

All will be revealed on Friday evening.