"If we keep turning up together here they'll have to rename it the 'Hill of O'Neill & Foster'," quipped Arlene Foster on Thursday evening.

The DUP leader and Northern Ireland’s First Minister had just finished a news conference with Deputy First Minister and Sinn Féin vice-president, Michelle O’Neill, at the Hill of O’Neill site in Dungannon.

In recent times, the duo has taken to giving media briefings at the spectacular venue close to Dungannon town centre. From the elevated site on a good day, as many as seven counties of the province of Ulster (pre-partition version) can be seen.

For over 300 years, the region was the stronghold of the O’Neill family, including Hugh O’Neill who along with Hugh O’Donnell went into exile after the Battle of Kinsale in 1601.

This month, the modern day Northern Ireland chieftains hit on the site to provide information and field questions in a socially-distanced way. 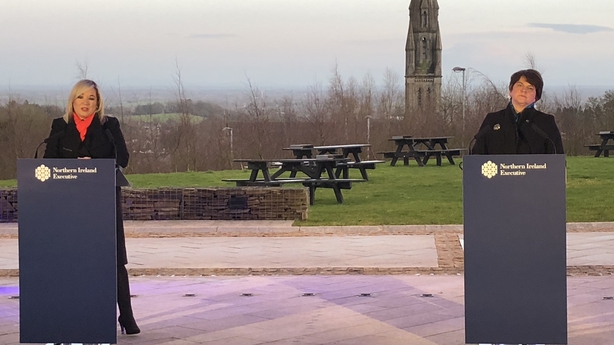 On Thursday, they confirmed that Covid-19 restrictions will continue in Northern Ireland until 5 March. They offered no guarantee the measures will end then. There were no tetchy exchanges or awkward silences.

Arlene featured down the line to the pre-recorded programme from her home in Co Fermanagh. The famous brooch got an outing. Michelle was back in Co Tyrone, with the 1916 Proclamation in the background.

Turf was marked – the Sinn Féin vice-president tore into the Tories, the DUP leader said she was convinced a majority in Northern Ireland does not want a United Ireland. But again between the pair, a political ceasefire was in place. No argy-bargy surfaced on the BBC stage.

Power-sharing in good times is a challenge. It is unique - a mandatory coalition, the arranged marriage that flowed from a shotgun-less wedding. Throw in the backgrounds, personalities and politics of Arlene Foster and Michelle O’Neill, add Covid to the mix - asking them to head up a power-sharing administration in these times is like sending a rookie trapeze artist on a high wire, with a blindfold.

As they tried to get some family time at the weekend, two difficult problems surfaced – travel arrangements during Covid and pressure for a border poll.

The wide-open back doors - North and South

Some commentators point to the seamless co-operation between North and South during the foot-and-mouth emergency exactly 20 years ago. A significant difference is that animals posed the main risk in 2001, whereas with Covid-19, human behaviour is the challenge to be addressed.

As the pandemic emergency continues, there is a wide-open back door in Northern Ireland which leaves the island, including the south, exposed. Travellers can arrive to its ports and airports from journeys originating in Great Britain and they are regarded as 'locals’ - internal UK travellers. As the DUP leader, Arlene Foster sees it like "someone going from Kerry to Cavan".

Some of the GB-based Irish, returning home to Belmullet, Co Mayo, at Christmas, could well have used Northern Ireland ferry ports.

Northern Ireland’s Health Minister Robin Swann and his officials have been pushing the authorities in Dublin to share information with them about passengers arriving into Republic of Ireland airports and ports before heading to Northern Ireland.

The NI authorities know Dublin Airport is significantly busier that its quiet network of Belfast City, Aldergrove and Derry. They are also aware of how all arriving passengers south of the border, including those from Great Britain, are obliged to fill in a locator form and show evidence of a negative virus test.

GDPR issues – who would get that information, how might it be used, might there be legal implications – are the main reasons why Dublin has so far refused to share that information with Belfast.

There were some testy exchanges on the Zoom calls at senior level in recent weeks with some best-not-repeated references to infection patterns in border regions.

It is a precarious risk to volunteer for occupancy of the high moral ground. Leo Varadkar was the essence of wisdom and restraint during a North-South video meeting last month. At the time, Northern Ireland’s figures were severe, compared to the situation south of the border.

The Tánaiste made a point of saying a situation can turn dramatically in a heartbeat. He and Arlene Foster have a strained relationship but she was grateful for his comment that afternoon. Before the month ended, much to his regret, he was proved right.

It’s probably because of that Unionist principle – Glasgow, London or Cardiff to Belfast is the same as Galway or Cork to Dublin – that Boris Johnson has imposed no special restrictions on passengers travelling from the island of Ireland to Great Britain. He uses the ‘Common Travel Area’ principle to allow that movement to continue. This, at a time when the Republic of Ireland is not reciprocating the arrangement.

Some politicians and commentators are floating the idea of a two islands bubble – Great Britain and the island of Ireland, north and south. Given the incidence of the disease in-built up areas of England, and England as the origin of a recent, more dangerous variant, at best this ‘islands bubble’ concept seems suitable to be categorised in the ‘more work required’ section.

On RTÉ’s This Week, the Labour party leader, Alan Kelly, recommended the introduction of mandatory quarantine to target ‘non-essential travel’ and he also suggested garda checks within 5km of the border.

Unlike Sinn Féin’s leaders, Mary Lou Mc Donald and Michelle O’Neill, the Labour party leader doesn’t have to take account of supporters on both sides of the border when promoting tweaks in Covid-19 policy.

His quarantine proposal may be a "work in progress", as he said, "there would need to be criteria about it".

But his comments in relation to further checks on movements, not just close to the border, but throughout the island could attract significant, wide-ranging political support.

Compared to the PSNI, the gardaí seem to be a more visible and more active force. The absence of senior PSNI figures publicly explaining lockdown measures is noticeable.

‘Essential journeys only’ is the stated policy on both sides of the border and the administrations in each jurisdiction would probably welcome police checkpoints throughout the island.

Covid-19 is the emergency that will demand and consume the energy of governments throughout the world for the immediate future. The future of the island of Ireland – shared, united or divided – will evolve at a different pace.

When drafting their stance on Brexit, the DUP didn’t spot the danger of nurturing political instability. But that ship has set sail.

Northern Ireland’s voters will be influenced by how their unique form of government performs. The next scheduled Assembly elections are in May 2022. Past history suggests the campaigning is likely to begin as soon as autumn, rather than early next year. But before that, the power-sharing Executive faces many challenges.

The list amounts to busy times and a range of issues that will test relationships within the Executive. For some of the period, Arlene Foster will nominate a replacement for Agriculture Minister, Edwin Poots, while he is absent for health reasons.

True to form, Sinn Féin’s Michelle O’Neill says it is time to start the conversation about a United Ireland while the DUP’s Arlene Foster says there is no appetite for it.

With Brexit, the DUP finds itself dealing with with a 'be careful what you wish for' situation.

Sinn Féin, the main opposition party in Dáil Eireann, is on course to be in government, as a major or minor partner, within the next decade.

If it gets that border poll it seeks, could it, too, find itself dealing with the consequences of something it had wished for? 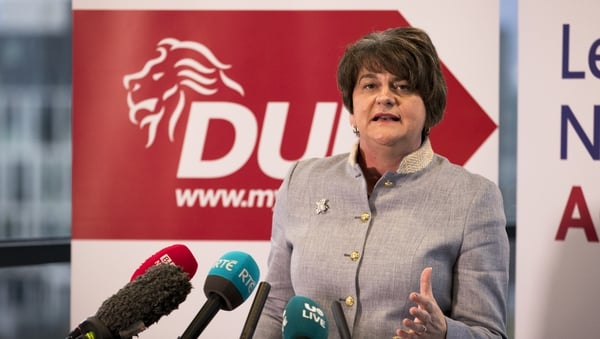