There were scenes of celebration across the US this week as the first doses of the Pfizer/BioNTech Covid-19 vaccine were administered.

The rollout in New York State was overseen by an Irish man.

Limerick native Michael Dowling is the CEO of healthcare company Northwell Health and he watched as nurse Sandra Lindsay became one of the first people in America to get the vaccine.

"Today is V-Day in our fight against Covid-19," Mr Dowling said.

"This truly is a historic day for science and humanity, one in which we here in New York and across the United States have been waiting for quite some time," he added.

After receiving the injection, Ms Lindsay said: "I feel great. It didn't feel any different that when receiving the annual influenza vaccine."

Distributing vaccines across a country as vast as the United States was always going to pose massive logistical challenges.

Over the last week, FedEx and UPS trucks and planes have been used to ship 2.9 million doses of the Pfizer/BioNTech vaccine to hospitals, clinics and distribution centres in all 50 US states. 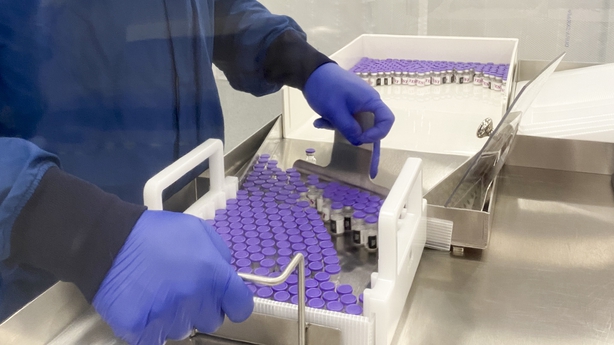 The Pfizer vaccine poses certain difficulties when it comes to storage and transportation as it has to be kept at -70C in a special sealed box, packed with dry ice.

A second vaccine, made by drug company Moderna, is expected to be rolled out in the US in the coming days.

There will be more doses shipped in the first wave compared to the Pfizer vaccine but the Moderna shots should be easier to transport as they don't need to be kept at such low temperatures.

The pandemic has led to lots of divisions in the US.

There have been disagreements over mask-wearing, lockdowns, social distancing and treatment methods.

Responses to Covid-19 have become linked to politics and geography.

There are now fears that those same divisions could affect the take up of vaccines.

A recent Reuters/Ipsos poll found only 61% of Americans were open to getting vaccinated.

Health experts have warned that those numbers need to be higher in order to stop the spread of the virus.

"If you really want true herd immunity, where you get a blanket of protection over the country, you want about 75 to 85% of the country to get vaccinated," according to top infectious disease expert Dr Anthony Fauci.

"I would say even closer to 85%," Dr Fauci said in a recent interview.

In a bid to address concerns over low vaccine take-up, US leaders have been rolling up their sleeves in recent days to prove to the public that it is safe.

The US Vice President Mike Pence got his jab yesterday in front of the TV cameras alongside his wife, the Second Lady Karen Pence, and the US Surgeon General Jerome Adams. 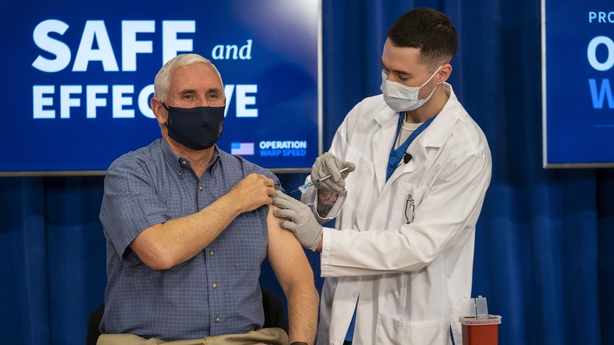 "I didn't feel a thing. Well done, and we appreciate your service to the country," Mike Pence said after receiving his vaccine.

"Karen and I wanted to step forward and take this vaccine to assure the American people that while we cut red tape, we cut no corners," he added.

Congressional leaders took a break from trying to agree a Covid-19 relief package to receive their vaccines.

"Today, with confidence in science and at the direction of the Office of the Attending Physician, I received the Covid-19 vaccine," the Speaker of the House Nancy Pelosi tweeted yesterday.

Today, with confidence in science & at the direction of the Office of the Attending Physician, I received the COVID-19 vaccine. As the vaccine is being distributed, we must all continue mask wearing, social distancing & other science-based steps to save lives & crush the virus. pic.twitter.com/tijVCSnJd7

A short time later, it was the turn of the Senate Majority Leader Mitch McConnell.

"Just received the safe, effective COVID vaccine following continuity-of-government protocols. Vaccines are how we beat this virus," he tweeted.

The White House says the US president Donald Trump will follow the medical advice of his doctors when it comes to taking the vaccine. Mr Trump contracted the virus in October and yesterday his Deputy Press Secretary Brian Morgenstern was asked about when we might see the president rolling up his sleeve to get his jab.

"He’s in discussion with his medical team about the appropriate time to take it. He’s expressed publicly his willingness to take it. And when the time is right, I’m sure he will remain willing to take it. As you know, he had the disease and had an antibody cocktail," Mr Morgenstern said.

The rollout of the coronavirus vaccine in the US came as the numbers of cases and deaths hit new record highs across the country.

As the total number of American fatalities linked to the virus passed 300,000, the funeral bells of the National Cathedral in Washington rang out 300 times, once for every 1,000 lives lost.

It is feared there will be a similar spike after Christmas meaning the funeral bells will continue to ring well into the New Year.