If you've never been to the ploughing, it’s hard to explain.

It’s a ploughing competition, it’s an agriculture trade show, it’s a food festival, a music festival, a car show, a machinery event, a shopping destination, a day out, it’s unique in so many ways.

It’s the biggest outdoor event in Europe. Up to 250,000 people attend every year.

It’s almost uniquely Irish and attracts people from all over the world. Big business rolls into town. Potential investors are brought along to see what rural Ireland has to offer. You might buy something small, but some big spenders will be there.

A virtual mountain of food is bought in to feed the hungry crowds. Close to 250,000 cups of tea will be sold. A quarter pounder is sold every second of every day when the ploughing is on. 14 acres of spuds were harvested to feed people last year. Throw in five tonnes of cheese, 20,000 eggs, 24,000 litres of milk and 40,000 breakfast rolls and you can see the scale of the crowds.

Six hundred picnic benches have been dotted all over the site for outdoor diners.

There are 15km of fencing surrounding the site, to keep the ticket dodgers out; 30km of metal roadway has been laid to create street surfaces to keep your feet nice and mud free. Over 2,000 people will be working just to keep the show on the road. 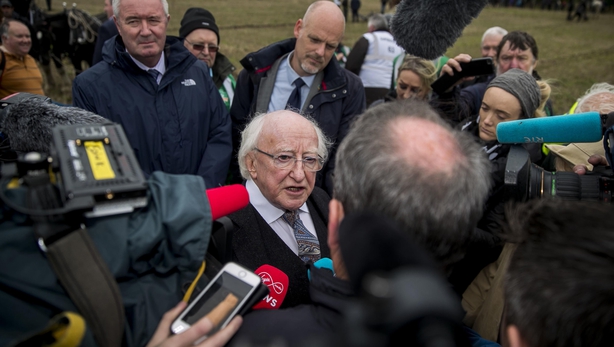 Michael D Higgins will have lunch there too, sitting with the great and the good of the ploughing world. For the volunteers it’s one of the attractions, taking tea with Michael D. The President also visits the ploughing fields, he always chats with the competitors and is genuinely inquisitive about the skill. He’s not the only politician in Fenagh this year, there’s hardly a political party without a presence and ministers, TDs and senators will flood the place all week. 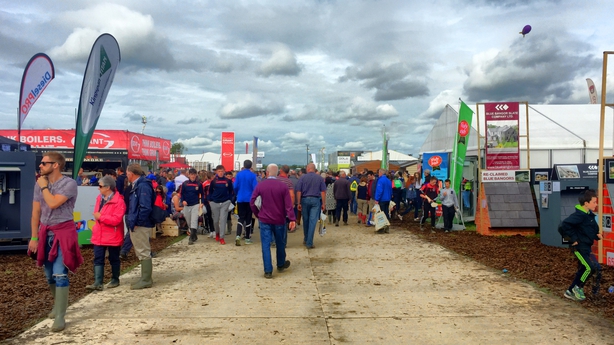 Some things you need to see:

Fashion under canvas, the daily fashion shows are standing room only.

Free food, you can graze for the day thanks to the big supermarket tents.

Times past, lots of demonstrations and vintage attractions.

Some things to avoid:

Queues - they’re hard to dodge, but expect to GET IN LINE.

Traffic - Follow the advice and you should be fine, ignore it at your peril.

Toilets - it’s a hard one to do, but Portaloo avenue is bleak!

If you’re travelling by train or bus:

Motorists travelling from the Cork/Munster area are advised to exit the M8 at Junction 4, Urlingford and to follow the signs for the event through Durrow, Ballyragget, and the Kilkenny Ring Road and join the M9 at Junction 8, signposted Dublin M9. Motorists will continue along the M9 and exit at Junction 6, Powerstown, Carlow and will be directed by gardaí to the Event Site, Blue Car Park.

Motorists travelling from Waterford are advised to exit the M9 at Junction 9, signposted N10, Kilkenny and to follow the signs for the event through Bennettsbridge, Gowran and Borris and will be directed by gardaí to the Event Site, Yellow Car Park.

On the return journey motorists will be directed on to the M9 at Junction 7, Paulstown for Waterford.

Motorists travelling from Limerick are advised to exit the M7 at Junction 21, Borris-In-Ossory and to follow the signs for the event through Ballacolla, Abbeyleix, Newtown and Leighlinbridge and will be directed by Gardai to the Event Site, Brown Car Park.

Motorists travelling from Dublin/The North will exit the M7 at Junction 11 onto the M9, signposted Waterford and exit the M9 at Junction 4, Prumpestown and will be directed by gardaí to the Event Site, Purple Car Park.

On the return journey motorists will be directed on to the M9 at Junction 5, Rathcrogue.

Motorists travelling from Galway/The West will exit the M6 at Junction 5 and travel through Tullamore, Mountmellick, Athy, Castledermot and onwards towards Tullow and will be directed by gardaí to the Event Site, Green Car Park.

Motorists travelling from Wexford will travel on the N80 through Bunclody and Ballon and will be directed by gardaí to the Event Site, Grey Car Park.

Where to get off:

There will be road closures on the N80 (from Graiguenaspidogue to Killnock, Co Carlow) until Friday 20 September at 5pm.

Junction 5 exits off the M9 motorway at Rathcorgue are also closed to traffic for the duration of the event.