Standing for any election is difficult. Trying to take-out a popular President is a David vs Goliath contest. However, that hasn't prevented nearly a dozen candidates from trying to get their name onto the presidential ballot paper.

The campaigns are under way. But what about the incumbent - Michael D Higgins? How is he going to run his re-election campaign?

Back in July, President Higgins announced that he was going to seek a second term, declaring that he had met all of the demands of Presidential office: constitutional, ceremonial and political.

He added that his experience of being in office could be of 'particular value' as Ireland enters into a phase of great challenge but also of great possibility.

Now, with his rivals taking to the battlefield, that experience will come in handy as he takes some big strategic decisions.

This is only the second occasion when a sitting President has faced such a contest. The first was Éamon de Valera’s campaign back in 1966. His was a different presidency, in a different age. So President Higgins effectively will be navigating in uncharted waters.

Michael D Higgins has distinct advantages - he's a popular Head of State who commands the combined political support of Fine Gael, Fianna Fáil and Labour. He must surely have an inclination, therefore, to remain presidential and not get dragged into slugging it out with his competitors.

President Higgins could try to argue that his presidential record speaks for itself but that isn't tenable in 2018.

Éamon De Valera remained aloof from the media back in 1966, but that's probably not possible in today's world of 24-hour news.

Trying to remain above the fray could also run the risk of ceding valuable air-time to the challengers. If President Higgins did lock himself away in Áras an Uachtaráin during the campaign, it could be perceived by voters as being a bit arrogant.

The likelihood is that President Higgins will come out fighting - something he's good at.

The past seven years have proven that he's also shrewd and is capable of reading the public mood - an essential skill for any candidate on the campaign trail.

How President Higgins campaigns will be as interesting as what he has to say. After all, he's the sitting President who is also a Presidential candidate.

His opponents will be watching closely to ensure that the office of the President of Ireland isn't used unfairly to secure his re-election.

The Áras has said President Higgins is 'confident' that his campaign activity can be separated from his constitutional role. It's something he can't be too careful about.

And what of the political endorsements from Taoiseach Leo Varadkar, Micheál Martin and Brendan Howlin? How President Higgins manages this will be fascinating to watch.

On face value, it's a distinct advantage to have the backing of three political parties. However, as a long-time Labour Party TD, Michael D Higgins was usually something of an outsider and always outspoken. Will the 'leftie' feel comfortable being the official candidate of official Ireland?

And then there's the message. Back in 1990, Mary Robinson told the electorate she would be a 'President with a purpose.' In 1997, Mary McAleese spoke of building bridges across the country.

What of President Higgins in 2018? His challengers are offering 'change' and 'energy.' The implication is that the incumbent offers only 'more of the same.'

It's clear that President Higgins will come under far more scrutiny this time round. The former Dragon's Den candidate Peter Casey is a case in point.

Much more of that can be expected. For example, President Higgins will be asked to explain why he is seeking a second term. During the 2011 campaign, he declared "7 years is enough, even for me." If he believed that then, why change now?

President Higgins will be watching closely who Sinn Féin chooses as their candidate. The expectation has been that the Munster MEP Liadh Ní Riada will get the nomination.

One former senior Minister observed last week that she has the capacity to attract support from well-beyond her party's base.

Some political observers believe that Sinn Féin's strategy is use the Presidential election in order to prepare for the General Election. However, President Higgins will not be taking any Sinn Féin candidate for granted, given the party's renowned electoral machine.

Seán Gallagher would appear to be President Higgins' most serious challenger. The businessman has the distinct advantage of having a national profile and the experience of fighting a Presidential election campaign before.

Mr Gallagher is a racing certainty to be on the ballot paper. It's unclear how his fellow Dragon's Den judges - Gavin Duffy, and Peter Casey - will fare.

It is going to be a real struggle for the rest of the candidates to get on the ballot paper. The independent Senator Joan Freeman certainly has name recognition for her work with Pieta House.

But she will be battling it out with a crowded field including artist Kevin Sharkey; Patrick Feeney, a former Aer Lingus worker from Galway; farmer John Groarke; Marie Goretti Moylan from Athlone; singer Sarah Louise Mulligan; composer James Smyth; and journalist Gemma O'Doherty.

With the exception of Sinn Féin, each of the challengers has to try to secure the support of four Local Authorities to get onto the ballot paper.

And campaigns matter. Presidential contests in Ireland have proven to be vicious and unpredictable in the past. The only certainty is that nothing is guaranteed.

Chu to remain as Green chair while running for Seanad

More EU countries to be added to quarantine list - Ryan 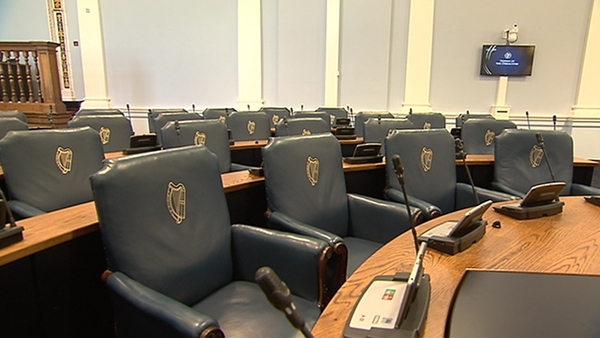 SF to back Independent candidates in Seanad by-election