The Government has agreed to place a cap on all market revenues of non-gas electricity generators.

Excess revenues will be collected and used to support electricity consumers.

The cap on market revenues will be set at €120 per MWh for wind and solar.

It will be at least €180 per MWh for oil-fired and coal-fired generation.

Where electricity suppliers can show that revenues in excess of the cap are being passed on through lower prices to consumers, those revenues will not be subject to the cap.

The cap on market revenues will operate from December 2022 to June 2023.

The Government has also decided to implement the temporary solidarity contribution, as set out in the European Council Regulation, to companies active in fossil fuel production and refining for the years 2022 and 2023.

The temporary solidarity contribution is calculated based on a company's taxable profits which are more than 20% higher than a baseline.

The baseline will be the average taxable profits for the company for the period 2018 to 2021.

Taxable profits that are more than 20% above the baseline will be subject to the temporary solidarity contribution at a rate of 75%.

Minister Eamon Ryan said given the volatility of gas prices, the level of proceeds from the cap on market revenues and the temporary solidarity contribution cannot be estimated with any certainty.

"Depending on the price level of natural gas, the proceeds could range from circa €300 million to €1.9 billion. However, the level is expected to be in the lower end of this range and could be even lower if gas prices reduce," he said.

The Taoiseach said earlier that there was a very comprehensive agenda before the Cabinet, which deals with many issues including energy, policing and housing.

Mr Martin was speaking as he arrived at Government Buildings earlier this morning.

Asked about the proposed windfall tax on the profits of energy companies, Mr Martin said that it will be significant.

"That funding will go back into Government to be used in the overall sense by Government next year to try to alleviate the pressures of the current energy crisis on the country that is being brought about by the way in Ukraine which is impacting all of Europe, and the weaponisation of energy by [Vladimir] Putin has been a significant factor in energy price increases."

The Taoiseach also said there would be no bills before Cabinet today aimed at addressing the rise in motorway tolls but he said the Minister for the Environment was examining the issue.

The CEO of Wind Energy Ireland has said the price announced today of €120 per MWh for wind and solar is lower than had been anticipated.

Speaking on RTÉ's News At One, Noel Cunniffe said: "The EU had set a price of €180 so we need to examine that in view of the potential impact that it might have on the attractiveness of Ireland in terms of investment in renewable energy."

In terms of how much revenue it will bring in, he said the Government has set out a range of between €300m and €1.9m and he said the amount of revenue that is made depends on the production of energy and international gas prices. 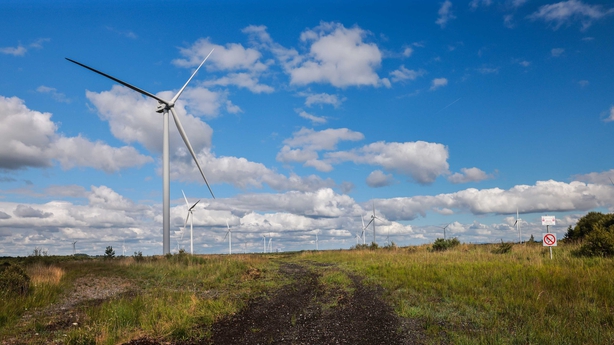 "It depends on how much wind energy we can produce in Ireland, say, over the next six to nine months and the more wind energy we have, the lower electricity prices will be.

"Secondly, it's related to the international gas price. Gas prices have tumbled in the past month and that has been driven by a lot of the high temperatures we have seen across the continent leading to higher levels of gas storage in Europe."

A former ESB advisor and Fellow of the Irish Academy of Engineering has said the new cap does not seem to apply to waste.

Speaking on RTÉ's Drivetime Gerry Duggan said: "Interestingly it doesn't seem to apply to generation from waste, such as the Ringsend waste energy plant and a similar plant in Platin [Works] where their costs haven't gone up."