While the funerals of the 10 Creeslough explosion victims have now taken place, the empty spaces left by their deaths remain, President Michael D Higgins has said.

President Higgins was speaking after the funerals of Robert Garwe and his five-year-old daughter Shauna Flanagan Garwe, who died in the explosion eight days ago.

The President joined relatives and other mourners for the requiem mass at St Michael's church in the village, the final two funerals of the 10 victims of the blast.

"The funerals are over, but all the vacant spaces are there. All the losses that were experienced. Something new will have to come in it's place," President Higgins said.

Relatives of 50-year-old Mr Garwe and Shauna walked behind their cortège the short distance from their home to St Michael's Church.

Teachers and pupils stood silently in a guard of honour as the coffins went past.

The father and daughter had gone into the village shop to buy a birthday cake for the girl’s mother Áine, when they were caught in the blast that brought down the building.

A relative told how they had been recovered from the rubble wrapped in each other’s arms.

They were brought into the church by family; Shauna in a small wicker coffin.

As mass began, gifts were brought to the altar.

They included the scooter that Shauna and her father were seen on together frequently.

Shauna's pink unicorn teddy was presented and placed alongside the many family photographs which adorned the altar and the two coffins.

Fr John Joe Duffy welcomed Mr Garwe's children and family members, some of whom had travelled from Zimbabwe for the funeral.

"Creeslough welcomes you to this home where Bob and Shauna shared the life of this community," he told them.

Fr Duffy painted a picture of a mischievous, fun-loving girl who brought great joy to her family and the entire village.

He told mourners the deaths of Mr Garwe and Shauna and all the others were "incomprehensible"; that they had numbed the community and that the pain was visible in the eyes of the people of Creeslough.

"Her father I'm sure in that split second just wanting to help and protect his beautiful daughter. We pray that they are side by side in heaven."

"She was a truly wonderful girl who left a lasting impression on everyone she met. She together with her dad were very well known in this community.

"They were, together with her mum and dad, such a familiar sight up and down the road. They were always together that little unit," he said.

The father and daughter are the last of the ten victims to be laid to rest after a week of funerals in Donegal.

Shauna was the youngest victim of the tragedy. Her father worked in construction and had moved to Donegal from Dublin.

Community coming together after tragedy in Creeslough

Meanwhile, it has emerged that a support fund set up by the Irish Red Cross has reached over €1m since its launch five days ago. 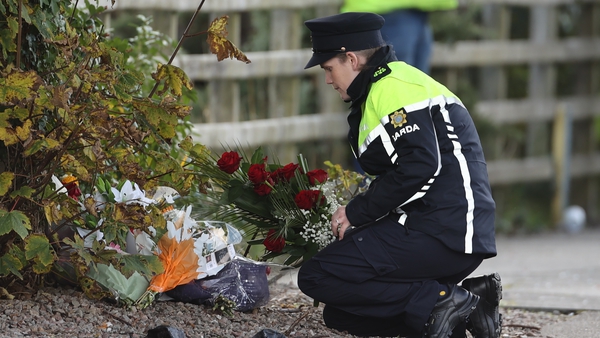