The English Channel port of Dover is battling to clear a chronic backlog of summer getaway delays, which Britain blamed on France but others said was caused by Brexit.

Port officials blamed "woefully inadequate" under-staffing of French border posts for ruining the start of the holidays for thousands of people.

Passengers go through both UK and French border checks at Dover before boarding ferries to northern France.

Port of Dover chief executive Doug Bannister said today was expected to be busier because of yesterday's logjam.

Cars and lorries queuing for the port snaked through Dover, stretching kilometres up the M20 motorway leading to the town.

At 7am, P&O Ferries told travellers to allow at least three to four hours to reach the port and clear all security checks.

The situation had eased due to the arrival of more French border agency staff, he added, but said the situation overall remained "extremely serious".

"The problem is that we have both very high volumes of passengers coming through and clearly a backlog in relation to HGVs," he said.

Dover has previously been a bottleneck for delays since Britain left the European Union, its single market and customs area in January last year.

The queues have been blamed on increased border checks and additional paperwork for freight traffic.

One French lawmaker, Pierre-Henri Dumont, said this weekend's travel chaos would happen again, calling it "an aftermath of Brexit".

"We have to run more checks than before," Mr Dumont, whose constituency includes the French Channel port of Calais, told BBC television.

Mr Bannister agreed there were "increased transaction times" post-Brexit but said capacity had been increased and the port was confident of handling demand at peak periods.

French authorities blamed an "unforeseen technical incident" in the Channel Tunnel for delaying the arrival of its border staff yesterday morning.

But operator Eurotunnel rejected the explanation.

One lorry driver said that he had been queuing in his HGV in Dover since 6pm on Thursday, and was still waiting to cross the Channel after 10am yesterday morning.

"I've been in something like this before, but this is the worst," he said. 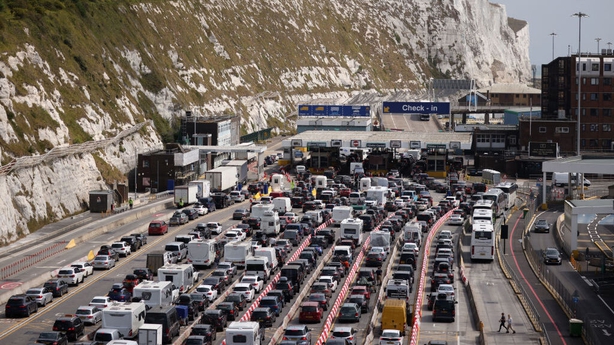 Head of roads policy for the AA Jack Cousens said: "As the schools closed their doors fully yesterday, Saturday could prove busier still this weekend.

"Drivers should continue to expect disruption and delays on major holiday routes to the south-west, eastern coast and ports of Dover and Folkestone.

"While many have decided to go at the start of the summer holidays, between now and the beginning of September when schools return, each Friday and Saturday will be busy on our roads.

"This is because these are the main switchover days for holiday lets."

The port said in a statement that it had increased the number of border control booths by 50%.

It went on: "Regrettably, the PAF (police aux frontieres) resource has been insufficient and has fallen far short of what is required to ensure a smooth first weekend of the peak summer getaway period."

The AA said its latest data showed other ports, such as Portsmouth and Newhaven ferry ports, were running reasonably smoothly.

The RAC said an estimated 18.8 million leisure trips are planned in the UK between Friday and Monday.
That is the most since the company began tracking summer getaway numbers in 2014.

Transport analytics company Inrix predicted the M25 - London's orbital motorway - will see some of the worst jams due to the summer getaway, singling out the stretches between Bromley and the Dartford Crossing; Maple Cross and the M3; and the M23 to the M40.

The A303 near Stonehenge in Wiltshire, the M4 between Cardiff and Newport in South Wales, and the M5 south of Bristol are likely to see queuing traffic.

Grant Shapps has said he is "working closely" with the French transport minister.

The Transport Secretary tweeted: "There's been severe delays today at Dover & so I'm working closely with my opposite number Clement Beaune to address the issues that caused tailbacks.

"I welcome his commitment that both Britain & France will work closely to minimise further disruption so people can get away quickly."