The leaders of the Group of Seven leading industrial democracies, gathered for their annual summit in southern Germany, condemned Russia's "abominable" missile attack on a shopping centre in the Ukraine town of Kremenchuk.

"We stand united with Ukraine in mourning the innocent victims of this brutal attack," they wrote in a joint statement tweeted by the German government spokesperson.

"Indiscriminate attacks on innocent civilians contribute to a war crime," they added. "Russian President Putin and those responsible will be held to account."

At least 13 people died in the attack and more than 40 others were wounded.

Earlier today, Ukrainian President Volodymyr Zelensky urged the world powers to do their utmost to help end Russia's invasion by the end of the year.

US President Joe Biden and his counterparts from the Group of Seven rich nations, meeting for three days in the Bavarian Alps, promised to tighten the economic screws on Moscow over its 24 February invasion.

They also put on a show of unity over Ukraine, even as the fallout from the war intensifies with soaring energy and food prices driving up global inflation.

"We will continue to provide financial, humanitarian, military and diplomatic support and stand with Ukraine for as long as it takes," the G7 said in a statement on the summit's second day.

Addressing the gathering via video-link, Mr Zelensky urged leaders to help end the war before winter sets in and conditions for his troops become tougher.

He urged allies to keep up the pressure and "intensify sanctions" on Moscow, including by imposing an oil price cap to limit Russia's energy revenues.

German Chancellor and summit host Olaf Scholz signalled the G7's readiness to do more, saying: "We will continue to increase pressure on (Vladimir) Putin. This war has to come to an end". 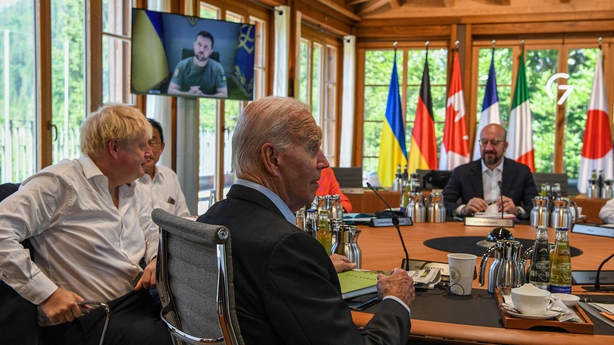 Among the new steps being discussed by G7 leaders is the price cap on Russian oil imports sought by Zelensky and sanctions targeting Russia's defence industry.

An announcement is "likely this week" on the purchase of an "advanced medium to long-range surface-to-air missile defence system", the source said.

The summit of the G7 - which comprises the US, Germany, Britain, France, Italy, Japan and Canada - ends tomorrow.

It will immediately be followed by a meeting of NATO countries in Spain, where Ukraine is again expected to dominate the agenda.

Since failing to capture Kyiv early in the war, Russian troops have focused on the eastern Donbas region where they have been gaining ground.

Two women were killed by Russian bombardments on the north-eastern Kharkiv region over the past 24 hours, a local official said today.

Russian shelling also continued in and around the eastern city of Lysychansk, after Russian forces at the weekend took full control of its twin city and industrial hub Severodonetsk following weeks of fierce fighting.

"Lysychansk and nearby villages are living their toughest days. Russians destroy everything on their way," said Lugansk regional governor Sergiy Gaiday.

Taking Lysychansk would give Russia control of the entire Lugansk region in the Donbas.

With concerns growing over the fate of Ukrainians in occupied areas, G7 leaders told Moscow it must "immediately allow the safe return" of citizens taken to Russia against their will.

"We urge Russia to behave responsibly and exercise restraint," it said.

Kyiv meanwhile was reeling from the first Russian strikes on the capital in three weeks. A missile attack struck a residential building early on Sunday, Ukraine said, leaving one person dead.

Russia denied it had hit a civilian target, however, saying its forces had struck the Artyom weapons factory in the neighbourhood.

Her country, one of Europe's poorest, has taken in tens of thousands of Ukrainian refugees.

Both nations received candidate status from the European Union last week, although the path to bloc membership is set to take years.

G7 members kicked off their gathering on Sunday by announcing a plan to ban imports of Russian gold, the latest in a series of sanctions aimed at punishing Mr Putin.

A senior US official on Monday said the G7 had also made progress on talks for a price cap on Russian oil.

The move would have the twin goals of starving the Kremlin of a key revenue stream for its war machine, while forcing down the price of Russian oil in the hope of reining in inflation, the official said.

European Council President Charles Michel however said on Sunday that all 27 member states would have to agree to such a price cap, which would require tweaking existing sanctions.

Biden and his G7 counterparts will also unveil new sanctions designed to hamper Russia's ability to resupply its weaponry, a senior US official said.

The leaders likewise share the view that money collected from higher trade tariffs imposed on Russian exports should be funnelled as aid to Ukraine "to ensure that Russia pays for the cost of its war", the official added.

One of the most worrying spillover effects of the war has been the threat of food shortages in vulnerable countries, as Russia's blockade of key ports holds up vital Ukrainian cereal exports.

With millions of tonnes of grain trapped in silos, concerns are growing that African nations highly reliant on Ukrainian deliveries could face famine.

"We urgently call on Russia to cease... enable free passage of agricultural shipping from Ukrainian ports in the Black Sea," G7 leaders said.

Russia denies being responsible for the delivery disruptions and says Western sanctions are to blame.

Indonesian President Joko Widodo, who will host a G20 summit in November, said he would also visit Ukraine and Russia in the coming days to ask Mr Putin and Mr Zelensky to open a dialogue for peace.

Indonesia, like most major emerging economies, has tried to maintain a neutral position, and Widodo has not bowed to Western pressure to exclude Mr Putin from the November meeting.