US President Joe Biden has vowed to push for a "more rational" approach to gun regulation in the wake of the country's latest mass shootings.

"I've been pretty motivated all along" to act on guns, Mr Biden told reporters in Washington. "I'm going to continue to push."

He added: "I think things have gotten so bad that everybody is getting more rational about it. That's my hope."

A day earlier, the president visited the Texas town of Uvalde, where 19 children and two teachers were killed by a teen gunman last week in a shooting at their elementary school.

The massacre was the deadliest school attack since 20 children and six staff were killed at Sandy Hook Elementary School in Newtown, Connecticut in 2012.

It came less than two weeks after another mass shooting, in Buffalo, New York, where 10 people died in an attack targeting African Americans, allegedly by a self-described white supremacist.

Congress has repeatedly failed to agree on tighter gun regulations despite the grim recurrence of mass shootings, but the latest killings in the country's epidemic of gun violence have sparked a push for new measures.

Yesterday key politicians expressed guarded optimism for reform, in a country with a thriving gun culture where guns outnumber people.

"There are more Republicans interested in talking about finding a path forward this time than I have seen since Sandy Hook," Democratic Connecticut Senator Chris Murphy told local TV yesterday, adding that "serious negotiations" were under way with members of both parties.

Mr Biden said he is deliberately "not negotiating with any of the Republicans yet."

"I know what happened when we had rational action before" on gun regulation. "It did significantly cut down mass murders."

To everyone impacted by the horrific elementary school shooting in Uvalde, Texas: We grieve with you. We pray with you. We stand with you. And we're committed to turning this pain into action. pic.twitter.com/TIYjdmfKVP

Mr Biden yesterday tried to comfort families in Uvalde as federal officials announced they are to review local law enforcement's slow response to the attack.

Anger has mounted over the decision by law enforcement agencies in Uvalde to allow the shooter to remain in a classroom for nearly an hour, while officers waited in the hallway and children inside the room made panicked 911 calls for help.

The president and first lady Jill Biden wiped away tears as they visited memorials at the Robb Elementary School, laying white roses and paying respects to makeshift shrines to the victims.

"Do something," a crowd chanted outside Sacred Heart Catholic Church as Mr Biden exited after attending mass.

The Bidens met privately with victims' families and survivors for several hours before later meeting behind closed doors with first responders.

"We grieve with you. We pray with you. We stand with you. And we're committed to turning this pain into action," Mr Biden tweeted in the early evening before concluding his visit.

Police say the gunman, 18-year-old Salvador Ramos, entered the school on Tuesday with an AR-15 semi-automatic rifle after earlier shooting his grandmother, who survived.

Official accounts of how police responded to the shooting have varied wildly. The US Department of Justice yesterday said it would review the local law enforcement response at the request of Uvalde Mayor Don McLaughlin.

"I feel sorry for them because they have to live with that mistake of just standing by," Julian Moreno, a former pastor at Primera Iglesia Bautista and great-grandfather of one of the girls killed, said of Uvalde's police.

US Border Patrol Chief Raul Ortiz, whose tactical officers led an assault that eventually ended the standoff at the school, defended his agency's actions.

"When my agents got the call, they rolled as quickly as they could," Mr Ortiz said.

The on-site commander, the chief of the school district's police department, believed the gunman was no longer an active shooter but was instead barricaded inside and that children were no longer at risk, a Texas state official said last week.

The Texas visit was Mr Biden's third presidential trip to a mass shooting site, including an excursion earlier this month to Buffalo.

Texas Governor Greg Abbott, a Republican who opposes new gun restrictions, and other local officials accompanied Mr Biden on his visit to the school.

"We need help, Governor Abbott," some in the crowd yelled as Mr Biden arrived. "Shame on you, Abbott."

Others shouted their thanks to Mr Biden.

Asked if she had a message for the president, 11-year-old Bella Barboza, who was friends with one of the victims, said she was now scared to go to school and urged change.

"This world is not a good place for children to grow up in," she said.

Ben Gonzalez, a life-long Uvalde resident and father of four, was among those at the school memorial site calling on leaders to help and saying Democrats and Republicans need to work together.

"Yes, we need new gun laws. But we also need a focus on mental health. There is not just one answer to this problem," he said. 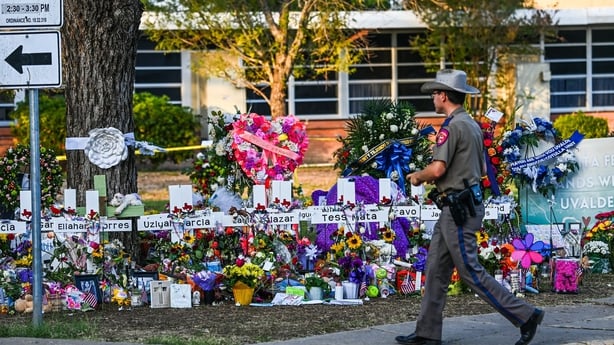 Democrats in the Senate also dialled down the rhetoric, as negotiations continued during the chamber's Memorial Day holiday recess this week.

"We've got to be realistic about what we can achieve," Senate Judiciary Chairman Dick Durbin told CNN's "State of the Union" programme last night. Mr Durbin's fellow Democrats narrowly control the 50-50 split Senate, but need 60 votes to pass most legislation.

Ramos, a high school dropout, had no criminal record and no history of mental illness but had posted threatening messages on social media.