Dublin Airport has "sincerely apologised" after passengers experienced "significant" queues for check-in, bag drop and security screening today, with a number of people missing scheduled flights as a result.

Airport operator daa had earlier warned that passengers queuing outside the terminal may need to contact their airline to rebook.

It has "sincerely" apologised "for the obvious frustration and inconvenience this caused".

Outside queueing was deployed from early on to cope with the increased numbers, as 50,000 passengers were expected to departed the airport over the course of the day.

Due to significant queues inside the terminal for check-in, bag drop & security, passengers queueing outside the terminal may not make their flight & may need to contact their airline to rebook. We sincerely apologise for the obvious frustration and inconvenience this may cause.

In a statement this evening it said passengers who missed a flight and incur additional costs as a result of today's queues should contact the airport’s Customer Experience team, to claim for vouched expenses incurred.

"Our ongoing work to continue the recruitment, training and deployment of security staff will continue to receive priority focus over the coming weeks to restore the highest standards across every area of Dublin Airport and to ensure that all of our passengers have the best possible experience as the airport’s recovery continues," it added.

Hundreds of passengers queue outside the terminal building this morning as Dublin Airport warned some people "may not make their flight" https://t.co/jyBiXg7dAD pic.twitter.com/enUdWpy332

In a statement this evening, Aer Lingus said screening delays at the airport caused "considerable disruption" to its schedule.

The airline said it has waived fees on flights departing the airport today to allow passengers change their travel plans, although it said a fare difference may apply.

It apologised to customers, and said it would engage with the daa. 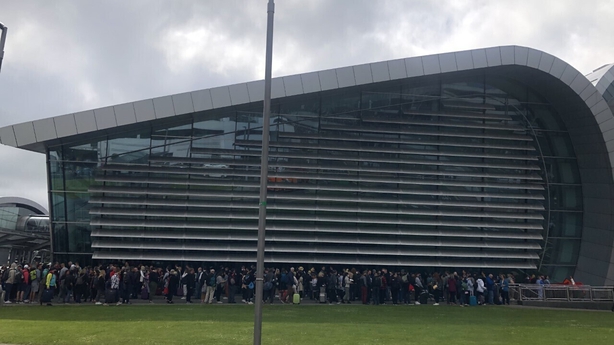 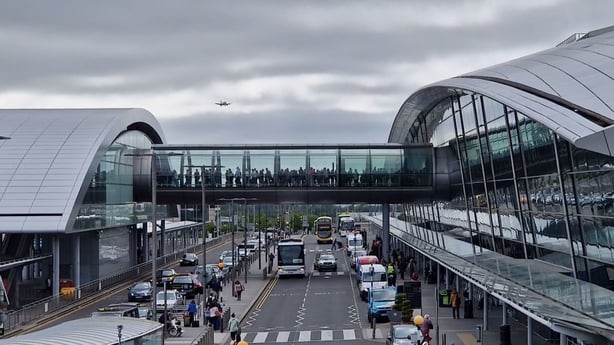 daa wants to make sure 'no one is out of pocket'

Earlier, Head of Communications at daa Kevin Cullinane said they were "deeply sorry" for the disruption caused to passengers who faced long delays.

Speaking on RTÉ's This Week, he said the daa was aware that this was going to be a busy weekend with 50,000 passengers departing, and there was "clearly" not enough staff to deal with the numbers.

"We have to put our hands up and say we got that wrong. We wish we had more staff available."

He also said the daa wants to make sure "no one is out of pocket" as a result and they will do their best to ensure anyone who has been impacted will be reimbursed.

Mr Cullinane said they did not have enough lanes open in security for the numbers that presented early this morning. "That caused a compounding effect throughout the morning", he said.

He said for health and safety reasons they put contingency plans in place with queues forming outside Terminal 1.

He said those queues grew quite considerably to beyond 500 metres and they had to make a "tough decision" at 10.30am to inform passengers with flights before midday that they might miss them.

He said some airlines have been trying to accommodate passengers by allowing them to book flights later today or tomorrow.

"If people do incur costs we ask them to contact our team" and added they will seek to reimburse these costs.

He said they will look at each case on an individual basis and they want to make sure "no one is out of pocket" as a result of today.

Mr Cullinane also defended the staffing of the airport as he said "steady progress" is being made and the daa is "aggressively recruiting." He said this has resulted, so far, in 300 additional staff and there will be 370 more security staff on site during the month of June.

He said they put all staff available on the roster for today as they try to stay ahead of growing passenger numbers.

"This weekend it caught up with us."

Hundreds of passengers queue outside the terminal building this morning as Dublin Airport warned some people "may not make their flight" https://t.co/jyBiXg7dAD pic.twitter.com/enUdWpy332

Mr Cullinane also said they have been preparing for a number of months for the rapid return of passengers after travel restrictions were completely lifted.

"We have been getting over 90% of passengers through security in under 45 minutes" and added that their goal is to return to the "gold standard" of under 30 minutes.

He said if passengers had turned up even earlier this morning there would have been lengthier queues.

Next weekend will be 'even busier'

He warned that next weekend will be even busier at the airport with around 100,000 passengers arriving and departing, and he insisted they will ensure they have the "optimum" number of workers in place.

He said the situation is now under control in Terminal 1 with some queues still in Terminal 2 and that should continue for a couple of hours.

"We are still advising passengers 2.5 hours in advance of a flight and if they have a bag to drop allow for additional time."

For long haul flight he said the advice is 3.5 hours and today, in particular, if someone has a bag to drop off or check in allow for more time. His recommendation was to add an additional hour.

Mr Cullinane referred to the "goodwill" of some passengers travelling today with one man allowed to be fast tracked so he could make his flight for his wedding abroad. However, he said it is "impossible" to facilitate everyone.

He said they will be looking at the "root cause" of today's delays and reviewing it over the coming days.