The Minister for Foreign Affairs Simon Coveney has said the European Commission has been working hard on solutions that would distinguish goods going to Northern Ireland from Great Britain and staying there, compared to goods entering Northern Ireland but destined for the Republic.

He said this was one of the main concerns of unionists around the Northern Ireland Protocol, and that a 'landing zone' could be found.

However, he said the EU needed a partner to find solutions and that there hadn't been "serious engagement" from the UK side since early February.

Mr Coveney was speaking after a 45-minute meeting with the EU’s chief negotiator Maros Šefčovič in Brussels.

He said: "Vice-president Šefčovič’s message is - let's get back to work, let's get back to dialogue and discussion and working through the detail of how we can respond to genuine concerns that are being expressed in Northern Ireland."

The UK wants much more sweeping exemptions from checks and controls for GB goods, including agri-food products, entering Northern Ireland if they are clearly staying there. 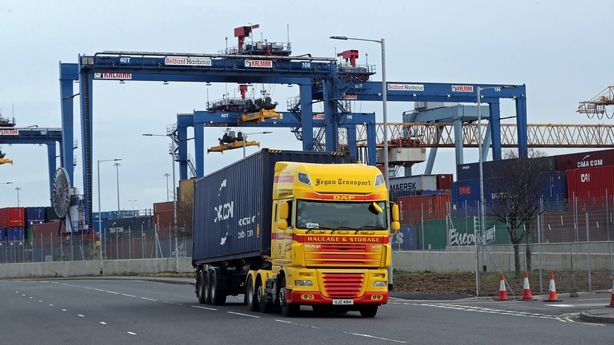 "Many in the unionist community want to make a clear distinction between goods that we know are staying in Northern Ireland in terms of purchase and consumption versus goods that are at risk of moving on in the EU single market through Northern Ireland and south into the Republic of Ireland.

"The [European] Commission has worked a lot on that issue. But of course, it needs a partner that can help them to deliver an outcome that moves this process forward through better labeling, through real time sharing of data, and a whole range of other regulatory issues that only the British government can give answers to," he told reporters.

He called on London to act in "partnership" as opposed to unilaterally introducing legislation that would overturn parts of the protocol and break international law.

Mr Coveney denied the claim that the EU was being over zealous in its application of the protocol.

He said there were extended grace periods which the EU had "deliberately turned a blind eye to" in order to help the talks process.

The UK had not engaged in the process since early February, he said. "So, let's get get our teams back into the negotiating rooms, and try and hammer out agreements that can settle Northern Ireland in terms of stability, predictability, and certainty, and also can help to get the institutions of the Good Friday Agreement back up and running in terms of a functioning assembly and a functioning executive," he said.

He added: "The alternative is for the British government to go it alone, and to force the EU to respond to a breach in a treaty, as opposed to compromise. And I think that's the last space that anybody wants to be in."

Only way to resolve protocol issues is through talks - Taoiseach

Earlier today, the Taoiseach said it is unacceptable and very difficult to comprehend why the democratically elected Assembly at Stormont is being prevented from convening.

Micheál Martin, who this afternoon spoke with the President of the European Council Charles Michel, said the only way to resolve issues around the protocol was through substantive talks between the UK and the EU.

The Taoiseach has said that the only way to resolve the issues over the Northern Ireland Protocol is through "substantive talks" between the EU and the British government | https://t.co/tkxoAzGcXq pic.twitter.com/C3rLqcO6oh

He said there was an understanding in advance of the Assembly election that not much "headway would be made" but there should be a renewed focus on the UK and EU talks now that the election is over.

"The European Union has made a lot of advances on its original position on medicines, SPS and customs with little reciprocation from the UK government side," he said.

The Taoiseach said it was important that the UK's 'landing zone' is very clear and the only way to flesh that out is through substantive talks.

Sinn Féin and the Alliance Party have both accused the UK government of "placating" the DUP, after talks with British Prime Minister Boris Johnson in Northern Ireland.

But the leader of the Democratic Unionist Party has rubbished the idea that Mr Johnson was taking sides between the unionist and nationalist parties.

The DUP has been pressing the British government to take unilateral action on the Northern Ireland Protocol, which it says undermines Northern Ireland's constitutional position within the UK.

The Irish Government, European Union and the US administration have all warned against such a move.

Four of the five main parties in the North - Sinn Féin, Alliance, Ulster Unionists and SDLP - have already said they believe devolution should be restored with immediate effect.