For decades, Irish people travelled to London for work and Kilburn was the destination for many, earning itself the nickname Co Kilburn.

Now two Irish knitwear designers have woven together the history of the Kilburn-Ireland connection, and their tapestry is on display at the National College of Art and Design in Dublin.

"Deadly, pitiful places that even the rats have abandoned, the cockroaches have done cockroaching and all that's left in London people."

"To sum up in Cork parlance..the place is a hole".

The solemn experience of Dinny and his two sons, characters in Enda Walsh's play The Walworth Farce. Commissioned by the London Borough of Brent, the tapestry is a "celebration of creatives in London" and focuses on the Kilburn area, where Enda Walsh and many other artists have lived.

"It's a cultural and historic piece," said Brenda Aherne, the Dublin-based half of Electronic Sheep, who spent two years working on it.

The triptych has gone on display at the National College of Art and Design, in Dublin, the designers' alma mater, and features original and untold tales from West London. 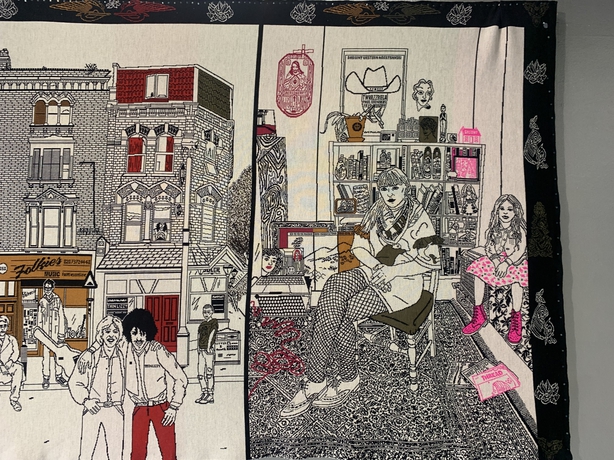 "We tell a lot of our own stories in our work," said Helen Delany, the Electronic Sheep designer who is based in Kilburn.

"It was important to us that we were included in this, so that we weren't just documenting things that have already been said."

For decades Irish people have travelled to London for work and Kilburn was the destination for many, earning itself the nickname Co Kilburn.

The knitted work chronicles the experiences of immigrants from the hardship endured to the fun-filled nights out at the Mean Fiddler, in Kilburn, in the 1980s, enjoyed by so many young people including the designers, Brenda Ahern and Helen Delany. 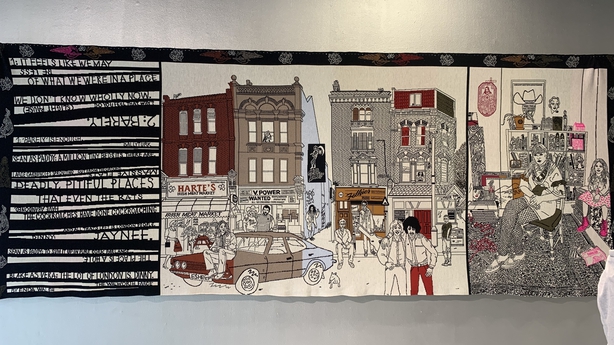 16-year-old Vince Power from Kilmacthomas, in Waterford, was one of thousands to leave Ireland in the 1960s to labour in England. Starting out in factories (and fired from one because the wrappers didn't go on the choc-ices), he found his home in Kilburn where he established the Mean Fiddler, before becoming one of the UK most successful concert promoters running festivals such as Glastonbury.

His image and some of the artists he showcased at the Mean Fiddler, like Shane MacGowan, Rory Gallagher and Sinead O'Connor are depicted in the tapestry. 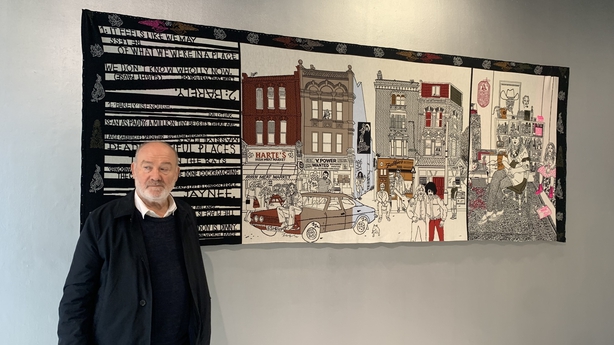 "I'm proud to be part of it," said Vince Power, as he stands in front of the displayed artwork, at NCAD, in Dublin.

They were "exciting times", according to the promoter, who still enjoys hearing tales from people he meets who met their future husband or wife there.

"I'm still in Kilburn. There's something special about it, it's full of life. It's now 52 different cultures, and it's a bit like a ladder. Everyone starts at the end of the ladder."

The Kilburn Tapestries is an artwork rich in detail, full of photographs and stories gleaned from Irish people with a connection to Kilburn, all knitted to life.