Farmers demonstrated in the capital today in protest against the Government's policy on the Common Agricultural Policy and the Climate Action Plan.

Around 100 tractors and other farm equipment were driven in convoy through the city centre.

The Irish Farmers Association warned that if they do not get meaningful engagement from the Government on the issues, they will escalate their campaign.

The convoy of vehicles from farms around the country left the Irish Farm Centre in Bluebell at 1pm and travelled through the city centre passing the Department of Agriculture, the Dáil and Government Buildings, before taking part in a rally in Merrion Square. 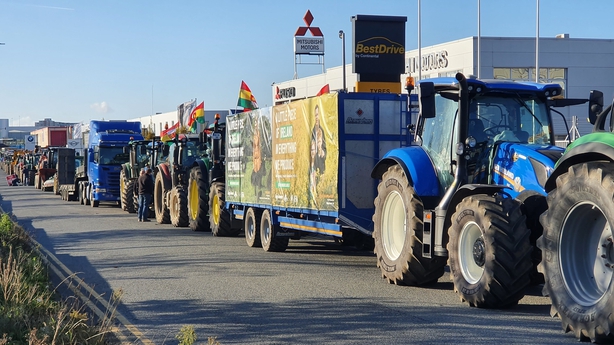 This is the third major protest in the Save Irish Farming Campaign since it began last June.

The protest was scaled back significantly in recent days due to the Covid situation and a Garda escort along the route meant the impact on traffic in Dublin city centre was minimal. 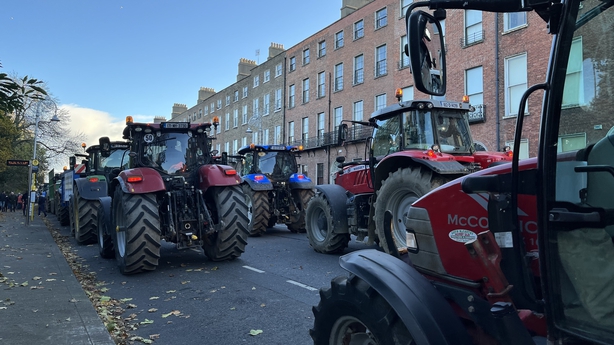 But those involved said they wanted to convey to Government the fears among farming families about their future, in particular in relation to the targets for the sector set out in the Climate Action Plan.

The Save Irish Farming campaign converges on Merrion Square for a rally ⁦@rtenews⁩ pic.twitter.com/8YQfCIo84V

IFA President Tim Cullinan said the 22% target could result in the loss of 10,000 jobs in the sector.

"The cost to the rural economy could be anything up to €1.2 billion a year. That's a massive cost for rural Ireland. So the Government has to sit up and listen to what we're saying here today. We need a whole of Government approach for a plan around this, a proper plan and the proper funding."

Pat Murphy, a dairy and suckler farmer from Ardrahan in Co Galway, who was joined at the protest by his daughter Aoife and son Padraig, said he took part to raise awareness about the role of the family farm.

"We produce foods to the very best environmental standards. And we just want to show the people of Dublin that we as a family produce the food but also send the message to Government that the plans that are in place for the climate change and the nitrates will put our family out of business. We just want small bit of fair play.

"We're very concerned. We all have a lot of investment in our farms and we see our returns dwindling every year. All we want is a chance to continue to produce food to the best way that we can, that we're doing for generations."

Anne Mitchell from Galway echoed those concerns. "The family farm is under threat. If the proposals are implemented there will be up to 55,000 families associated with agriculture out of business. We can't allow that to happen because we are producing the best quality stock in the world, grass based and fed."

Corney Buckley from West Cork took his six-year-old grandson Gearoid to the protest because he said he's concerned about his future.

"We don't disagree with the changes, we just want to make it more practical. We are here today to show that we are willing to support these changes but not to accept them in the way they're being presented to us at the moment.

"I'm concerned for the likes of my grandson, who was very interested in farming. We want to stay farming, we want our children to stay in farming but at the same time we have to do it in a practical way."

Now a time of change for farmers - Coveney

Minister for Foreign Affairs Simon Coveney said this is a time of change for farming and it is a challenging time.

Speaking on RTÉ's The Week in Politics, Mr Coveney said the Government needs to work with farming organisations - like the IFA and others - to reassure them that they can work out a roadmap to manage that change and keep farms profitable.

Sinn Féin TD Louise O'Reilly said small family farms have been "squeezed time and time again by big producers" and by the people they are selling to.

Speaking on the same programme, Ms O'Reilly said that needs to be rebalanced and there needs to be a commission on the future of the family farm that has input from those at the coalface. 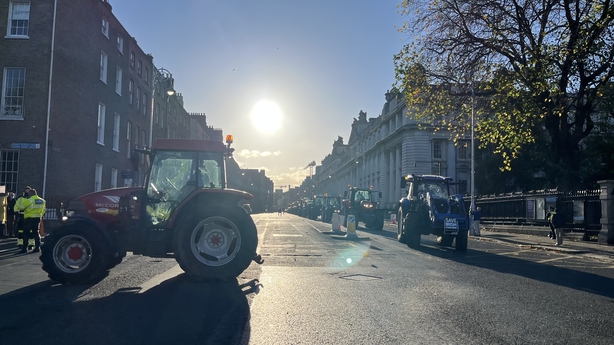