Children who have a good relationship with their father are happier, feel less anxious, and are more engaged in physical activity, according to research by the Economic and Social Research Institute.

78% of nine-year-olds reported getting on very well with their father and 84% said they would talk to them if they had a problem.

However, the research also found that men with a more conservative view of fatherhood, emphasising their financial responsibility as a father, tended to be less involved with their children and had less positive relationships with them.

Using data from the Growing Up In Ireland study, the research examines fathers' involvement with their children, from nine months to nine years of age in two-parent households.

Over half of fathers reported sharing most care and play activities with the nine-month-old infant equally with their partners, though mothers were more involved in personal care, such as feeding, dressing and bathing the baby.

Fathers more involved in care was linked to greater bonding with the infant and this, according to the study, had a lasting effect on relationship quality measured when the child was aged five and nine. 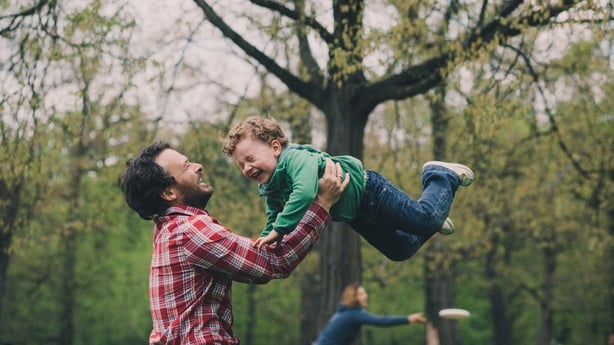 As the child grew older, fathers were very involved in activities and outings with the child, especially reading to the child, playing games with them and being involved in sports or other physical activity.

Fathers were more likely to engage in these activities with their sons than their daughters.

It also said fathers with higher levels of education tended to be more involved in activities with five and nine-year-old children, in contrast to their lower levels of involvement in infant care.

Fathers reported close relationships with their children, with low levels of father-child conflict.

While levels of feeling stress or strain in their role as a parent were relatively low, financial strain contributed to parental stress among fathers.

First-time fathers also reported more feelings of stress as they adjusted to their new role.

The findings show the importance of early involvement of fathers in caring for and playing with their children.

Working longer hours emerged as a barrier to fathers' involvement.

In contrast, fathers who had availed of family-friendly working practices (such as flexible hours) when the child was five years old were still more involved in their children's lives four years later.

Fathers who adopted a more traditional view of their role, emphasising their financial responsibility as a father, tended to be less involved with their children and had less positive relationships with them.

The report authors said the study shows the value of "providing information and support that is tailored to different groups of fathers at different stages of their children's lives".

Lead author Emer Smyth said it highlights "the importance of government and employer support for the kinds of working arrangements that would help foster this early involvement".

The report was produced in partnership with the Department of Children, Equality, Disability, Inclusion and Youth (DCEDIY) and will be launched by Minister Roderic O'Gorman today.