The Taoiseach has told a meeting of his party that guidance for venues reopening on Friday will be practical and common sense will apply.

Micheál Martin said living with Covid-19 in the short to medium term will involve a significant booster campaign.

He said collective behaviour must change to level the current increase in cases and antigen testing will be used widely.

RTÉ News understands that multiple booking of tables in bars and restaurants is expected to get the green light in updated guidelines that will be published tomorrow.

It is also likely that table service will continue in bars but socially distanced queues will be allowed at bar counters.

However, people will not be able to congregate there and the move is aimed at addressing staffing shortages.

Allowing people to stand at live events is being considered but it could involve some limit on capacity.

A spokesperson for Minister for Arts Catherine Martin said tonight that talks today with industry representatives were constructive and guidelines will be published tomorrow.

Earlier, the Licensed Vintners Association (LVA) described today's negotiations with departmental officials, regarding the further easing of restrictions on hospitality, as a "useful engagement".

However, the LVA's Donall O'Keeffe warned that the industry is under "enormous pressure" to get things right ahead of Friday's reopening of nightclubs and live venues "for the first time in 585 days."

He said it was "extremely late" to be receiving guidelines tomorrow.

Mr O'Keeffe said the revised guidelines were needed "as soon as possible" as "time is really pressing."

Officials from the departments of tourism, health and enterprise met vintners, hotels and restaurants regarding new guidelines which flow from the further easing of restrictions.

Meanwhile, contacts are continuing with the events and music organisations about the reopening of live venues and nightclubs reopen this Friday.

This afternoon, Minister Martin said that engagement with the sector was continuing but she was "confident" of a solution to the issue of standing in music venues in the next 24 hours.

Separately, new enforcement measures were due to be considered at a meeting of the Government's Regulatory Forum today.

This involved Government officials meeting with gardaí, the Health and Safety Authority as well as environment health officials.

Labour Party leader Alan Kelly said the Government's plans for reopening nightclubs and live events this Friday are both "unworkable and incomprehensible".

Speaking in the Dáil, he said the Government could have consulted with the entertainment industry in advance of yesterday's announcement but instead put "the cart before the horse".

Mr Kelly also said Government needed to secure a date from the National Immunisation Advisory Committee (NIAC) on when it would issue a recommendation regarding booster vaccines for healthcare workers, introduce serial testing in nursing homes, and explain why it has taken a year to roll-out the wider use of antigen testing.

In reply, Taoiseach Micheál Martin said that protecting lives and people's health had to inform the Government's approach - above and beyond anything else.

He said the central message from Government yesterday regarding the further easing of Covid restrictions was that it had to be done in a "cautious" way.

The Taoiseach said the measures proposed for live entertainment had to be "ring-fenced".

He accepted that the industry did not get a lot of notice but said that is just the way the situation evolved.

Mr Martin noted that there were a lot of calls for the enforcement of digital Covid cert regulations even though the Government was heavily criticised when the measure was introduced regarding perceived threats to civil liberties.

The Restaurants Association of Ireland (RAI) said it is "the eleventh hour" and there are no full guidelines yet.

RAI President Mark McGowan - who owns Scholars Townhouse Hotel and Peggy Moores pub in Drogheda - said this is a "critical time of year" as they head into the Christmas period.

Speaking on RTÉ's Morning Ireland, he said they are still unsure about things like multiple table numbers, and are hoping guidelines will be given out sooner rather than later.

"There's a lot of decisions that have to be made," he said. "We have to plan rosters, we have to plan the logistics of our table plans in the restaurant, and we may have to hire more staff as well.

"The fact that the Covid certs are here to stay - which I actually welcome - I think it is an additional labour cost, but what it does is mitigate risk and I think that's ultimately what this is all about."

There is also a huge amount of frustration in the live music sector with the Government's partial reopening plan.

Dave Parle, who runs Hidden Agenda Promotions, said it appears that shows in live venues this weekend, sold to full capacity, are not allowed to happen because of their earlier start time.

Speaking on same programme, he said he has a show that is due to open on Friday week that begins at 9pm and runs until 3am in a club setting.

He said: "I have no idea if that's allowed within the current guidelines."

"It is really, really last minute and that is very stressful for everyone in the industry, from promoters to managers to the artists themselves who've been waiting a long time to get back out there."

Minister for Further and Higher Education Simon Harris said the extension of some Covid-19 restrictions may encourage more people to get vaccinated.

Speaking at a pop-up vaccine clinic at Trinity College Dublin, Mr Harris said that he believes many young people might be taking into consideration the reality that vaccine certificates will be in place until Spring.

"About 850,000 people in our country are aged between 16 and 29. The last set of figures I saw showed around 695,000 of them have been fully vaccinated, that's huge, really good. But that also means, if we do our maths, around 155,000 who are not yet fully vaccinated", Minister Harris said.

Asked if he felt that there had been a lack of compliance, on the part of businesses, with vaccine certs, he said regulators will meet today to discuss the matter and all options are on the table to improve enforcement.

However, he said that he believed that better compliance with existing enforcement of measures could be achieved without introducing additional sanctions. 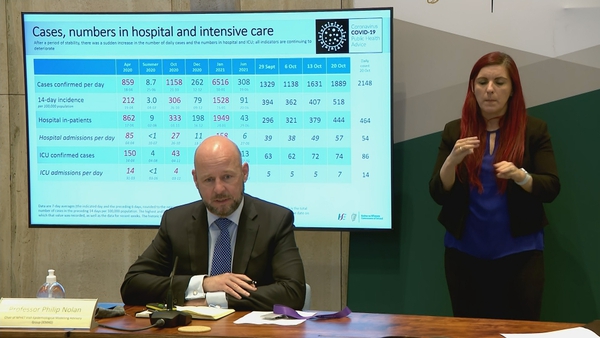