The OECD has announced that 136 countries have signed up to a new international agreement on corporate tax rules.

In a statement, the OECD said 'major reform' of the international tax system will ensure that multinationals will be subject to a minimum 15% tax rate from 2023.

This is an updated and final version of the agreement reached in July.

Ireland was joined by Estonia last night and today by Hungary which means all EU member states are part of the deal.

Of the 140 countries which engaged in the OECD process, Kenya, Nigeria, Pakistan and Sri Lanka have opted to remain outside the agreement.

The agreement which is made up of two parts, known as Pillar One and Two, will be delivered to the G20 finance ministers meeting in Washington DC on 13 October and then to the G20 Leaders’ Summit in Rome at the end of October.

The statement said that countries will collect an extra US$150 billion in new tax revenues annually, as a result of the new rules, and that the agreement "does not seek to eliminate tax competition" but puts agreed limitations on it.

It describes its Pillar One proposals, where a proportion of the profits of the very biggest multinationals will be taxed according to where their sales are made, as a "fairer distribution of profits".

This will affect multinationals with global sales above €20 billion and profitability margins above 10%.

The statement says they can be considered "as the winners of globalisation", adding that 25% of their profits above the 10% threshold will be reallocated to various jurisdictions.

The statement says that taxing rights to US$125 billion of profits will be reallocated every year.

It goes on to say the revenue gains as a proportion of existing revenues will be greater for developing economies, and confirms that the global minimum corporate tax rate under Pillar Two will be set at 15%.

It also confirms that it will apply to companies with sales above €750 million a year.

This is expected to generate an extra US$150 billion in global tax revenues annually.

The OECD Secretary-General Mathia Cormann described the deal as "a major victory for effective and balanced multilateralism."

The statement says the OECD will develop rules to bring the agreement into domestic legislation during 2022 in order for it to take effect in 2023. 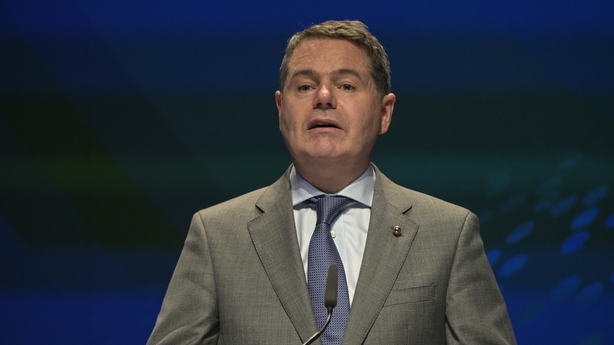 Minister for Finance Paschal Donohoe has welcomed the agreement.

"The agreement reached this evening at the Inclusive Framework demonstrates the importance of working together to achieve positive outcomes for the world.

"This landmark agreement will address global tax challenges of digitalisation and provide the certainty and stability that large business and Government need," he said.

Mr Donohoe said the revised statement builds on the July statement and provides the certainty necessary for Ireland to join the agreement.

He received Government approval to sign up to the agreement yesterday.

"Today’s agreement provides that clarity including a set minimum effective tax rate of 15% will apply to our multinational enterprises," he said.

Mr Donohoe indicated that following the agreement, Ireland will continue to be an attractive location for multinational enterprises.

"Ireland will remain ‘best in class’ when multi-nationals look to investment locations, we will continue to have an attractive tax rate, and we will continue have all of the many benefits multinational enterprises in Ireland benefit from and enjoy," he said.

The chief executive of IDA Ireland has said that he believes the change in corporate tax rate "will not have an adverse impact on the base".

Speaking on RTÉ's News at One, Martin Shanahan said that there are "no certainties" and many things impact foreign direct investment, but multinationals have previously faced hurdles and chosen to remain in Ireland.

When asked if jobs are secure and whether those companies that are mobile will stay in Ireland, Mr Shanahan said: "I believe that the change that the Government decided on yesterday will not have an adverse impact on the base".

He said that many of these multinationals have been here for decades.

"They have weathered recessions, global financial crises, Brexit and the recent pandemic and they have still found favour with Ireland and continue to invest in Ireland," Mr Shanahan said.

He said that there has been a "hugely strong flow of investment" in recent weeks and months.

"Most of those decisions were made in full knowledge that Ireland was engaged in the OECD process, and that there was a likelihood that Ireland would just sign up to it so the news yesterday will not have come as a major surprise to companies."

But he added that there is a need to "remain competitive".

"I believe the new corporate tax rate for those companies that have revenues above €750m is still competitive at 15%, " the IDA chief said.

Minister of State for European Affairs Thomas Byrne said it was possible there would be a financial gain with signing up to the global corporate tax deal, but added that there was also huge uncertainty around this.

Speaking on RTÉ's Today with Claire Byrne, he said corporation tax has been the "hardest to predict" and that the real cost will be in the potential reduction of FDI flows.

Minister Byrne said for multinationals investing in Ireland there is certainty around the tax system here, albeit at a higher rate.

"We still don't know all the detail of the EU directive ... they have given some assurances to the Government," he said.

Mr Byrne said Ireland's biggest objective in considering the OECD proposal was to make sure that "we weren't unfairly disadvantaged".

Read More:
Raising corporation tax rate the 'right decision' - Donohoe
Explainer: How and why the Irish corporate tax rate changed
A 'momentous day' for tax policy in Ireland
Farewell to the 12.5% - Ireland's saviour or a stick to beat us with?

He said he sought changes to the deal to secure "certainty and stability".

"I believe we have now reached that point", he said. "This is the right decision. It is a sensible and pragmatic decision", and will be "critical to create" certainty.

The Government has received assurances on both this point and the retention of Research & Development tax credits "at the highest level" in the European Commission.

The Department of Finance is guiding that the impact on corporate tax receipts will be in the order of €800m to €2 billion a year.

Opposition parties have supported the decision to sign up to the OECD tax deal.

Sinn Féin said it accepted the merits of the process and Ireland could not be an outlier or labelled a tax haven.

Party leader Mary Lou McDonald said there must be an absolute assurance that the 12.5% rate will still apply to SMEs that are the backbone of the Irish economy.

She also said the Government must be sure that Ireland can still retain a level of control to set and decide rates.

The Labour Party said the move would not have a negative impact on existing jobs or the pipeline of investment.

Finance spokesperson Ged Nash said Ireland should have confidence to trade on its highly skilled workforce and mature sophisticated economy.

He also called on the Government to publish detailed financial projections of the cost of the move.

People Before Profit said the change was long overdue.

TD Richard Boyd Barrett said that it was right that "staggeringly profitable corporations that have been involved in very aggressive tax avoidance strategies should pay a little more in tax".