The European Union is likely to challenge on legal grounds any move by the UK to trigger Article 16 of the Northern Ireland Protocol, RTÉ News understands.

Furthermore, the EU could resort to raising tariffs on UK products in retaliation, which officials say is provided for under the EU-UK free trade agreement.

Although the UK government has repeatedly threatened to trigger Article 16, saying the conditions have already been met, the European Commission does not believe that to be the case, and would challenge any triggering of the article on legal grounds.

While details have not been shared with member states, it is understood the European Commission is preparing a hierarchy of responses should London trigger Article 16.

"The commission is internally of the view that Article 16 could happen at any time, that it hasn't gone away, that it's a very serious possibility," says one diplomat familiar with preparations.

It is understood the European Commission is working on a twin-track approach, on the one hand bringing forward new proposals that would ease the implementation of the protocol, while on the other hand preparing a response to an Article 16 move.

"In the second track they're looking at things like further infringement [legal] proceedings, arbitration mechanisms, and cross retaliation into the [EU UK] Trade and Cooperation Agreement. There's a sort of a hierarchy that gets more and more serious," the diplomat said.

"The commission will challenge the UK invocation of the article legally, because the view would be they do not have the right to invoke it, that the conditions are not there to invoke it."

The preparations come against the backdrop of simmering tensions between London and Brussels over the protocol, and a contested version of events surrounding British Prime Minister Boris Johnson's meeting with US President Joe Biden in Washington this week. 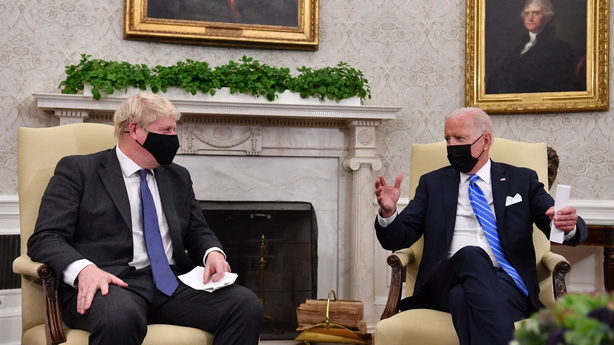 Despite the tensions, diplomats say there has been a slight improvement in the mood, with a phone call last week between European Commission Vice President Maroš Šefčovič and his UK counterpart David Frost.

A meeting of the EU-UK Specialised Committee, which manages the technical aspects of the protocol, is taking place in Brussels today.

On Twitter yesterday Mr Frost said: "The protocol is clearly having a continued negative effect on everyday life & business in Northern Ireland.

"The outstanding issues now need to be dealt with urgently. I and my team are in contact with the EU daily, but we need a full response to our July Command Paper soon."

The UK Command Paper has called for sweeping changes to the protocol, which the EU regards as an unacceptable renegotiation.

Officials say Mr Šefčovič will bring forward new proposals on customs, agri-food checks, medicines and an enhanced role for Stormont in mid-October, after the Conservative Party conference has concluded.

It is expected technical talks involving both sides will intensify in the coming weeks. However, there are tensions over how the EU's proposals are presented, with the UK insisting London will not accept ideas on a take-it-or-leave-it basis.

Should the UK trigger Article 16, it is understood there would be strong push back by Brussels and Dublin against any notion that a suspension of the goods provisions of the protocol would mean the obligation to check and control products entering the single market shifting back to the Irish land border.

While such a scenario was being looked at in 2019, when a no deal Brexit was a possibility, on this occasion the context is different, say sources.

In 2019, there was no legal fallback in place. Now, say EU sources, there is the international and legally binding Withdrawal Agreement, of which the protocol is part.