The National Public Health Emergency Team is to meet on Monday to consider its advice to Government on whether or not to further ease Covid-19 restrictions from 5 July.

The meeting means that Cabinet could take a decision on the issue on Tuesday.

Taoiseach Micheál Martin is understood to have spoken with Chief Medical Officer Dr Tony Holohan earlier today, in advance of the meeting.

The Taoiseach is also believed to have been in touch by phone with Tánaiste Leo Varadkar and the Green Party leader Eamon Ryan.

Earlier, Mr Martin had confirmed the Cabinet would meet earlier than expected next week to decide on whether to ease restrictions, including those on indoor hospitality.

Speaking on RTÉ's The Week in Politics he said that he was not in a position to name the date, and would not speculate on what the decision might be.

Mr Martin said he understands "how difficult and devastating the year has been to hospitality, we get that, we understand that. And we also understand the need to give notice".

It comes as the Restaurants Association of Ireland called on the Government to make a decision, by Tuesday, on whether indoor entertainment will be allowed to resume from 5 July. 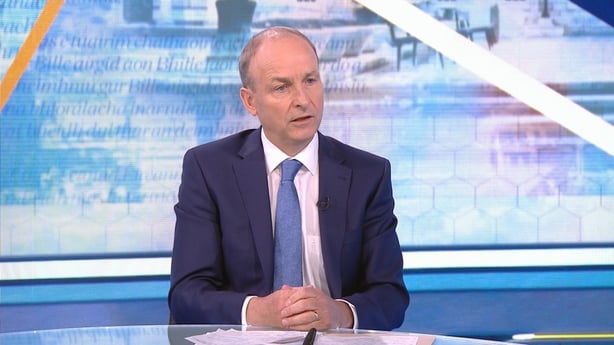 In recent days, there have been suggestions that indoor dining and entertainment could be delayed due to the Delta variant of Covid-19 - something which has prompted the hospitality sector to demand a speedy decision.

The association maintains that the Cabinet's powerful Covid-19 committee must convene tomorrow night to decide on its approach, and the Cabinet must approve it on Tuesday.

Ministers are also expected to receive the latest vaccine advice from the National Immunisation Advisory Committee (NIAC) on what vaccines can be made available to younger people.

The key areas of focus will be if younger people can in future receive AstraZeneca and the Johnson & Johnson (Janssen) vaccines and if people in their 60s can receive a different second shot to the first vaccine they received.

"The worst thing that can happen is you open up, and then start closing again" @MichealMartinTD says there are "a number of various scenarios" that could emerge in terms of how hospitality is treated going forward in the context of the Delta variant | https://t.co/gzMAWnnqQx pic.twitter.com/tsxHlWl3Dr

Mr Martin said whether AstraZeneca and Janssen vaccine surpluses can be used for younger people will be a factor that influences the Government's decision to reopen hospitality.

He said he has spoken to the Chief Medical Officer, and that the National Public Health Emergency Team (NPHET) will meet earlier next week in advance of the Cabinet meeting on Tuesday.

The risk is different now to what it was at Christmas because more people have been vaccinated and close to overall four million doses have been administered, the Taoiseach said.

He said it was possible to reopen retail and schools "without causing any dramatic spikes".

The mantra is "anything we open, we keep open".

However, reports that he is veering towards a cautious approach to reopening are "not entirely correct" the Taoiseach said.

Mr Martin said that "there is urgency" to address the issue of older age group waiting for their second dose of vaccine.

"Already we have announced that we are bringing that forward from what was originally expected.

"By the week 19 July all of those in that age cohort will be fully vaccinated and we have brought forward the timelines significantly," he added.

"We will be making this decision early in the week"

Taoiseach Micheál Martin has confirmed the Cabinet will meet earlier than expected to decide on whether to ease restrictions from 5 July, including indoor hospitality | More: https://t.co/gzMAWnnqQx pic.twitter.com/LsBidUU2ih

The Taoiseach said he "doesn't want to interfere or be seen to interfere with the deliberations of NIAC" on the use of surplus vaccines for younger age group.

But he said that the CMO has written to NIAC "in relation to this issue, because it is not just AstraZeneca, there will also be 300,000 Janssen vaccines available as well."

"A substantial number of vaccines are available that cannot be used on the current age framework and guidance that has been given."

"Given that the Delta variant is here it is an issue that merits re-examination".

The Taoiseach said that international travel should resume from 19 July as Ireland enters the EU Digital Covid Certificate system.

He said: "We have given a commitment in relation to the 19th, so I think we will continue to operate the Digital Certificate."

Meanwhile, Minister for the Environment, Climate and Communications Eamon Ryan said that if there is a delay in the reopening of hospitality it will only be a short one.

Speaking on RTÉ's This Week programme, Mr Ryan said: "One of the things we won't be doing is stop - starting, starting again, and then stopping again.

"So, when we reopen, we want to keep it open.

He said that if there is a delay that 19 July would be the most likely new start date.

But he ruled out introducing a policy to only permit those who are fully vaccinated to enter restaurants and bars, because it would be difficult for owners to establish who has or has not got the jab.

"I think that there is a variety of problems with that, but I think the main problem would be is how can you tell?

"If you start making it a condition for everyday life, I think we could lose some of the public support, so I don't think that makes sense."