Northern Secretary Brandon Lewis has said all commitments made in an agreement brokered by the Irish and British governments last year, including Irish language legislation, must be implemented.

A promise to introduce a cultural package, including legislation for Irish language and Ulster Scots, was included in the New Decade New Approach deal.

Sinn Féin leader Mary Lou McDonald last night called on the UK government to go over the heads of the Stormont Assembly and introduce the legislation at Westminster.

The party has said it will refuse to go back into power-sharing with the DUP unless there is a firm commitment to an Irish language act. It says the DUP leader Edwin Poots has told it privately that he cannot deliver on that commitment at this time.

Earlier today, Brandon Lewis met Edwin Poots and the person he has nominated to be the next First Minister of Northern Ireland, Paul Givan.

Later in a video statement posted on his Twitter account, Mr Lewis said he has been engaging with all of Northern Ireland's political parties to ensure that the devolved administration continues to function.

Stating that people "need to see that politics work", he said it is vital that all aspects of last year's agreement are implemented in full "as agreed to by the parties in the executive".

"The people of Northern Ireland deserve, and I believe want, a stable mature functioning executive. One that's focused on addressing the issues that really matter to all of our daily lives," he added.

"The issues such as housing, health, education and jobs. History has shown us that political stability can never be taken for granted. We all have a responsibility to protect it. It's the foundation on which a peaceful, more prosperous future for all of the people of Northern Ireland is built.

"And I'll continue to work with the parties to deliver on that."

NEW: An update on my discussions with the NI parties.

The people of NI deserve a stable, mature, functioning Executive that is able to deliver in their best interests.

They need to see that politics works and dialogue and debate delivers results. pic.twitter.com/LygJWaO3oc

It comes after the DUP warned the British government not to intervene in devolved issues in Northern Ireland to legislate for Irish language protections.

East Antrim MP Sammy Wilson's comments come after Sinn Féin called on the Northern Ireland Secretary to pass the laws at Westminster as a way to resolve a political stand-off within the power-sharing executive.

Mr Wilson said: "Following the latest demand from Mary Lou McDonald, the government must not interfere in devolved issues at the behest of Sinn Féin.

"The government foisted the most liberal abortion laws in the British Isles on Northern Ireland. Such actions only served to undermine devolution."

Mr Wilson also said that such a move undermines the power of the Northern Ireland politicians.

He said: "To force through the latest Sinn Féin wish list will cause further damage to the credibility of the Northern Ireland Assembly.

"Repeated interventions in devolved matters undermines the manifesto promises of Northern Ireland parties and rightly raises questions about the confidence that voters can have in those they elect if their promises can be causally overridden by the Secretary of State."

Speaking on RTÉ's Morning Ireland, Sinn Féin MLA and Northern Ireland Finance Minister Conor Murphy said that if the Irish language legislation is delivered within the time frame agreed last January, then it would allow Sinn Féin to move ahead and nominate a deputy first minister.

Mr Murphy warned that if the legislation is not delivered, the party will not nominate a first minister.

He said the conversation with the DUP has been "exhausted" and the party is clearly not going to honour commitments.

SDLP leader Colum Eastwood MP has described the debacle as a "sham fight" between the DUP and Sinn Féin and dubbed it a "disgrace".

Colum Eastwood MP said: "It is a disgrace, in those circumstances, that Sinn Féin and the DUP are indulging themselves in a sham fight and threatening to collapse the government.

"They have learned nothing from the last time they brought us to the brink.

"Fourteen years leading government and these parties have clearly demonstrated that they are incapable of delivering on their commitments."

He said that if the two parties cannot find a way forward that he and fellow party MP Claire Hanna will table amendments to legislation due at Westminster next week.

The SDLP has been working with parliamentary drafters for weeks to craft amendments that will break the deadlock.

"If the DUP and Sinn Féin cannot find a way to deliver the Irish language and other cultural commitments that they made last year, then we will step up, step in and seek to table amendments to legislation due at Westminster next week."

Meanwhile, former Northern Secretary Julian Smith, who helped broker the agreement that led to the restoration of the Stormont Assembly last year, has said a decision by the British government to introduce Irish language legislation would have his full support.

Mr Smith and Minister for Foreign Affairs Simon Coveney were the architects of the New Decade New Approach agreement. One of the elements was a cultural package with commitments on a range of issues, including the Irish language and Ulster Scots.

In a tweet this morning, Mr Smith said "any vote for a cultural package at Westminster will have my full support".

In an earlier tweet, he said: "Stability of Northern Ireland devolved government is vital - whether it is the Assembly or UK government delivering them, all elements of the New Decade, New Approach incl the cultural package now need to be legislated for to allow NI government to focus on NI citizens & the pandemic." 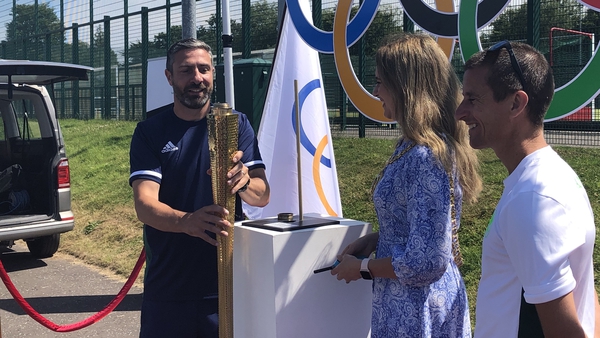