ESB Networks has described as "unlawful" a 24-hour strike by some network technicians belonging to the Independent Workers Union.

The company said it plans to take legal action over the strike, which started this morning.

The union, which is not recognised by the ESB, has said the dispute centres on a lack of consultation over work to be outsourced to the private sector.

It has offered to defer the strike if the company agrees to go to the Workplace Relations Commission, which it has so far refused to do.

The Independent Workers Union claims to represent up to 500 of the 1,500 network technicians employed by ESB Networks.

However, rival unions recognised by the company, who previously represented them, insist the figure is around 300.

The IWU members have been working to rule since Monday, but are today escalating a 24-hour stoppage.

There will be a two-day strike next week. 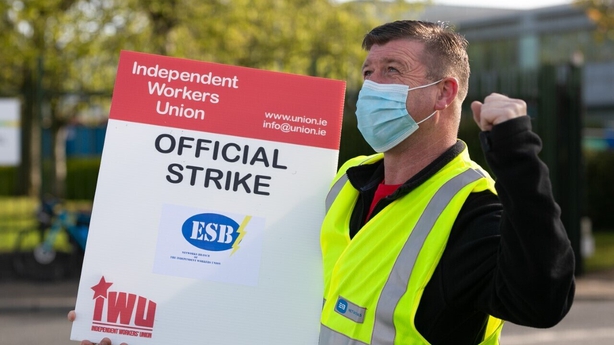 ESB Networks insists the IWU action is unlawful, but did not mount a legal challenge before the situation escalated to a strike.

The union insists it has observed all the required procedures and will call off the action if the ESB goes to the WRC.

The ESB stresses that technicians belonging to the recognised unions – Connect, SIPTU, and Unite - are not in dispute, and will deliver emergency cover.

It acknowledges there has been "limited impact" to electricity customers from the industrial action to date, but said it is responding as quickly and safely as possible when faults occur.