The Minister for Health has said he hopes the decision to temporarily suspend the use of AstraZeneca's Covid-19 vaccine "is nothing more than a very short deferral".

Stephen Donnelly also said he expects a decision by the European Medicines Agency on an assessment of the reports of blood clotting will be completed in this week.

"We'll see what the EMA says in the coming days, but what we hope is that this is nothing more than a very short deferral," he said.

The administration of the AstraZeneca Covid-19 vaccine was suspended in Ireland earlier today as a precaution following concern over blood clots in Norway.

Mr Donnelly said the decision was made on foot of a recommendation from the National Immunisation Advisory Committee (NIAC). 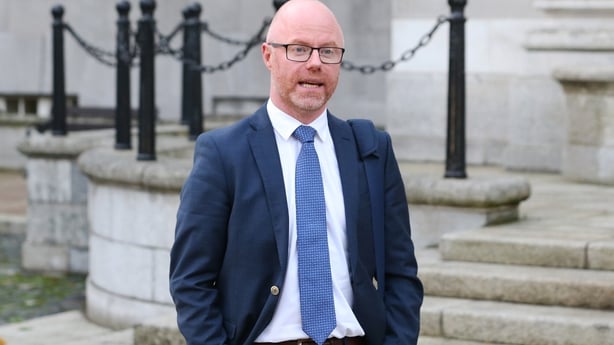 So far, more than 110,000 doses of the AstraZeneca vaccine have been administered in Ireland, which is about 20% of all doses given to date.

"Obviously nobody would want to see this kind of thing happening, however what I am very comforted by, as Minister for Health, is that our senior clinicians leading the vaccination programme moved very quickly and they are erring on the side of caution," said Mr Donnelly.

Asked if the move was a blow to the vaccination rollout here, Mr Donnelly said "any vaccination programme has to accept and have built into it the fact that these things can happen".

"The reports from Norway have to be taken seriously, they are being taken seriously. We always expected that there could be situations where a temporary deferral was needed. This is one of them," he said.

Mr Donnelly said around 30,000 people, who were due to receive a first dose of the AstraZeneca vaccine this week, will have their appointments rescheduled.

In a statement, a spokesperson for AstraZeneca said that an analysis of safety data covering more than 17 million doses of the vaccine administered has shown no evidence of an increased risk of the conditions concerned.

It said that no trends or patterns were observed in clinical trials.

The spokesperson said: "An analysis of our safety data that covers reported cases from more than 17 million doses of vaccine administered has shown no evidence of an increased risk of pulmonary embolism, deep vein thrombosis or thrombocytopenia with Covid-19 Vaccine AstraZeneca.

"In fact, the reported numbers of these types of events for Covid-19 Vaccine AstraZeneca are not greater than the number that would have occurred naturally in the unvaccinated population.

"In clinical trials, no trends or patterns were observed with regard to pulmonary embolism, deep vein thrombosis, or events possibly related to thrombocytopenia.

"A careful review of all available safety data including these events is ongoing and AstraZeneca is committed to sharing information without delay."

The Deputy Chief Medical Officer has said that the decision to temporarily suspend AstraZeneca is on "an abundance of caution" following the situation in Norway.

Dr Ronan Glynn said he hopes it will be just a one-week pause on the vaccine use, as more data comes out with the European Medicines Agency (EMA) investigating the risks.

He said it is a bump in the road, but there should still be full confidence in the vaccine programme.

The Deputy Chief Medical Officer has said that the decision to temporarily suspend the administration of the AstraZeneca vaccine is on "an abundance of caution" | https://t.co/uLHcbZ0GGt pic.twitter.com/BdDI7ZI8wz

He told RTÉ's This Week programme that there have been no reports of similar clotting events in Ireland akin to those seen in Norway.

"It's very important to reassure people that there is no evidence of a cause and effect at this point," he said.

"We have a safety signal and when we get those we have to act and proceed on the basis of a precautionary principle. So hopefully as this week goes on we'll get more reassuring data from the EMA and we can recommence the programme.

"It may be nothing, we may be overreacting, and I sincerely hope that in a week's time we are accused of being overcautious."

On advice for those who may have already received one dose of the AstraZeneca vaccine, Dr Glynn said the events seen in Norway are "a very rare event" and reiterated that he could not say there was a cause or effect involving the vaccine.

Dr Glynn said he did not have up-to-date information as to how the temporary suspension would affect the overall roll-out for the coming week, but acknowledged there would be people out there who were due to receive the jab who will now not get it.

Meanwhile, the Health Products Regulatory Authority said it has received a small number of reports of blood clots relating to the AstraZeneca vaccine.

It said that none of these reports are of a nature similar to those alerted by the Norweigan Medicines Agency yesterday.

The HPRA added: "We will continue to monitor national reports very closely and continue to encourage the reporting of any suspected side effect following vaccination with a Covid-19 vaccine."

Read more:
What has happened with the AstraZeneca vaccine?
Vaccine suspension 'necessary' for confidence - Butler

Health officials in Northern Ireland have said they will continue to administer the AstraZeneca vaccine.

The MHRA said: "We are aware of the action in Ireland. We are closely reviewing reports but given the large number of doses administered, and the frequency at which blood clots can occur naturally, the evidence available does not suggest the vaccine is the cause."

The Department of Health in Northern Ireland said that the vaccination programme will continue and a "further expansion" will be announced very shortly.

Norwegian health authorities have said that four people, including three health workers, who had recently received the AstraZeneca vaccine are being treated in hospital for bleeding, blood clots and a low count of blood platelets.

Norway halted the roll-out of the AstraZeneca vaccine on Thursday, following a similar move by Denmark. Iceland later followed suit.

"We do not know if the cases are linked to the vaccine," Sigurd Hortemo, a senior doctor at the Norwegian Medicines Agency told a news conference held jointly with the Norwegian Institute of Public Health.

All three individuals are under the age of 50.

"They are quite sick ... We take this very seriously," he said, adding that authorities had received notification of the cases yesterday.

Before Denmark and Norway stopped their roll-out of the AstraZeneca vaccine, Austria stopped using a batch of the shots while investigating a death from coagulation disorders and an illness from a pulmonary embolism.

The EMA said on Thursday the vaccine's benefits outweighed its risks and that it could continue to be administered.