In the first phase, all pupils in England's schools are expected to return to class from 8 March.

Socialising in parks and public spaces with one other person will also be permitted from that date.

A further easing of restrictions will take place on 29 March when the school Easter holidays begin - with larger groups of up to six people or two households allowed to gather in parks and gardens.

Other measures in the road map set out by Mr Johnson include:

Boris Johnson outlines the four-stage plan which could see all of England's coronavirus restrictions lifted by 21 June | https://t.co/PCBgN2pbqB pic.twitter.com/Z7j1uhuWj5

The devolved governments in Northern Ireland, Scotland and Wales are working on their own plans to ease the lockdown rules over the coming months.

International travel rules will also be reviewed, with 17 May targeted as the earliest possible date for a foreign holiday.

A further piece of work to conclude by 21 June will examine social distancing requirements - including hugs with friends and relatives - the use of face masks and requirements to work from home.

British PM Boris Johnson says the lifting of Covid restrictions in England will be subject to "data not dates", and that there will be at least five weeks between each step of the new plan | https://t.co/PCBgN2pbqB pic.twitter.com/FoPYH3xHcX

The measures are expected to be put to a Commons vote before the House rises for Easter in late March.

He told the Commons: "I know the Prime Minister will come under pressure from those on his own benches to go faster and to throw caution to the wind.

"Last week, it was reported that around 60 of his own members of parliament called for the end of all restrictions by the end of April. 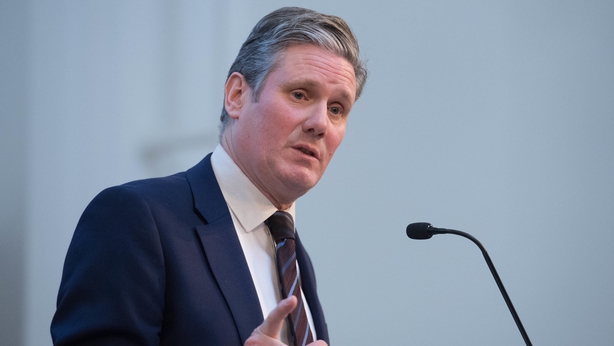 "I'm sure there are going to be similar calls this afternoon. I hope the Prime Minister takes the opportunity to face this down because if this road map is to work he needs to listen to the chief scientific officer and the chief medical officer, not (Conservative MP Steve Baker) or (Conservative MP Mark Harper).

"If the Prime Minister does, he will have our support and will secure a majority in the House. If he does not, we will waste all the sacrifices of the last 12 months."

Conservative Mark Harper, leader of the Covid Recovery Group of lockdown-sceptic backbenchers, had said earlier that all legal restrictions put in place in response to the pandemic should be lifted by the end of April.

However, scientists have urged caution, with leading epidemiologist Professor John Edmunds warning that any easing of the lockdown must be gradual to prevent a surge in hospital admissions and deaths.

The Royal College of Nursing (RCN) said Mr Johnson should not to "bow" to political pressure and dilute public messaging in the road map.

Alongside the four-step plan, Mr Johnson also launched a series of reviews - including on whether people should be able to show if they have had a Covid-19 vaccine or a negative test.

The work will look at whether "Covid status certification" could help reopen the economy by allowing people who have received a jab or a negative test result to do things which would not be allowed for those who could not prove their status.

Officials recognise that there are moral and ethical questions as well as practical ones for any such move, which has been highly controversial in Westminster.

A research programme will use pilot schemes involving testing and other measures to run events with larger crowd sizes.

Britain is preparing for a revaccination programme against Covid-19, likely to run later this year and consist of a single booster dose, the government said in its road map to end coronavirus restrictions.

"The government is planning for a revaccination campaign, which is likely to run later this year in autumn or winter," the document said.

"Any revaccination is likely to consist of a single 'booster' dose of a Covid-19 vaccine: the ideal booster may be a new vaccine specifically designed against a variant form of the virus."