Dentists are likely to be involved in the delivery of vaccinations against Covid-19, Minister for Health Stephen Donnelly has said.

The move comes as he confirmed on Twitter that 161,500 vaccine doses have been administered so far here.

Mr Donnelly told the Dáil that he asked his department to put in place an agreement with the dentists.

"They are clinically trained, they give people injections all the time and there has been initial conversations now I understand between the department and dentists," he said.

He said a deal is in place with pharmacists who will be part of the roll-out, but exactly when they will become involved is an operational decision for the HSE and not a political one.

Dentists are likely to be involved in the delivery of vaccinations against Covid-19, Minister for Health Stephen Donnelly confirms pic.twitter.com/dBly4HdRDJ

The Chief Executive of the Irish Dental Association (IDA) welcomed the Government's plan to involve dentists in the delivery of Covid-19 vaccinations to the public,

Fintan Hourihan said the inclusion of dentists in the vaccine roll-out "is positive news for the entire population".

Mr Hourihan said the IDA was awaiting discussions with the Department of Health as to how this will work, "but dentists are willing and ready to take part now and time is of the essence".

He also called on the Government to honour its promise to begin the vaccination of dentists themselves from 8 February following a series of meetings over the past week.

In relation to the quantity of the AstraZeneca vaccine, Minister Donnelly told the Dáil it is too early to say what quantity of the vaccine Ireland is to receive in the first quarter of the year.

The company had committed to supplying 600,000 doses to Ireland and Mr Donnelly said the previous target of vaccinating 700,000 people by the end of March was "contingent on that supply coming in".

"AstraZeneca has signalled they will not be delivering the full amount that was anticipated," he said.

Mr Donnelly was responding to Sinn Féin Health Spokesperson David Cullinane, who said it is now clear that the 700,000 target will not be met.

"At the moment the conversation and negotiation is still ongoing. Neither Ireland nor any EU state can say what the final agreed amount will be for the first quarter until the end of March," Minister Donnelly said.

Minister for Health Stephen Donnelly says it is too early to say what quantity of the Astra Zeneca vaccine Ireland is to receive in the first quarter of the year pic.twitter.com/v2PpzSn34b

'Some adjustments may be necessary' to original targets

Minister Donnelly said the vaccination of all over 70s will start next month as planned, despite difficulties with the supply of AstraZeneca vaccines.

"While it is anticipated that this should not impact on the start date of the roll out of the delivery of vaccines to the over 70s in the community, its impact on the pace of the vaccinations is still difficult to gauge at present," he said.

Mr Cullinane said the minister's comments were "inadequate" and "lacked the detail, clarity, and certainty needed".

"It is deeply disappointing that the minister could not offer clarity on the target for the end of March - the initial target of 700,000 will likely not be met," he said.

"You need to level with people rather than over-promising. Tell us the honest figures," she said.

Labour Leader Alan Kelly said it is "worrying" and "doesn't make any sense" that the minister was unable to provide figures by location on which frontline healthcare workers had been vaccinated.

Minister Donnelly said the HSE was working on this and that he would make it available as soon as he had the informaiton.

Solidarity-People Before Profit TD Bríd Smith described the vaccine programme as a "shambles".

Meanwhile, the Government has asked the National Public Health Emergency Team to provide advice on the benefit of people taking vitamin D to give additional protection against Covid-19.

Speaking in response to Independent TD Marian Harkin in the Dáil today, Tánaiste Leo Varadkar said: "We have asked NPHET to advice us and give information we can give to the general public."

Mr Varadkar said there had been a number of studies on the issue.

He added there was evidence it was "beneficial" and taking vitamin D did not do harm, but he cautioned people should take no more than 25 micrograms.

The Tánaiste said most people should be able to get enough vitamin D from a varied diet and sunshine, but he conceded that this was difficult to do at present. 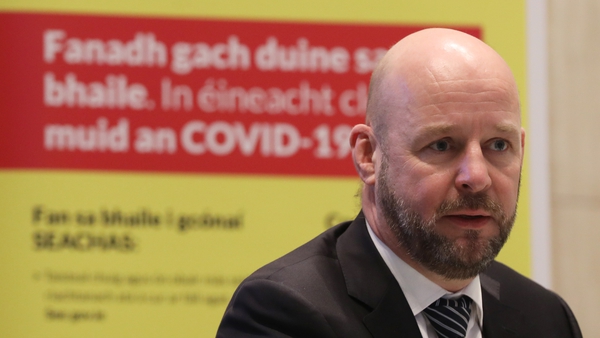