The Commission of Investigation has said it found an "appalling level of infant mortality" at mother-and-baby homes.

In its long-awaited report, it said the proportion of women admitted to such homes in Ireland was probably the highest in the world in the 20th Century.

It says 9,000 children died in the institutions and it finds that mortality rates were very high in the period compared to the overall national rate of infant mortality.

The final report of the commission into 14 mother-and-baby homes and four county homes has been published following a five-year investigation into the lives of women and children in those 18 homes during the period of 1922 and 1998.

The report finds that there were about 56,000 women and 57,000 children in the mother-and-baby homes and county homes.

The greatest number of admissions was in the 1960s and early 1970s.

It said in the years before 1960 mother-and-baby homes did not save the lives of "illegitimate" children; in fact, they appear to have significantly reduced their prospects of survival.

The women who were admitted to mother-and-baby homes ranged between girls from the ages of 12 and women in their 40s.

The commission says this was remarkably consistent across the larger mother-and-baby homes.

The report says that some pregnancies were the result of rape; some women had mental health problems, some had an intellectual disability.

However, it says the only difference between women in mother-and-baby homes and their sisters, classmates and work companions was that they became pregnant while unmarried.

The report reads: "Their lives were blighted by pregnancies outside of marriage and the responses of the father of their child, their immediate families and the wider community."

Women were admitted to mother-and-baby homes and county homes because they failed to secure the support of their family and the father of their child.

They were forced to leave home and seek a place they could stay, without having to pay.

The report says "many were destitute".

Women who feared the consequences of their pregnancies being known to their family and neighbours entered mother-and-baby homes to protect their privacy. Some travelled to Britain for the same reason.

The commission states that there was no evidence that the women were forced into mother-and-baby homes by Church or State authorities.

"Most women had no alternative."

Women were brought to mother-and-baby homes by their parents or other family members, without being consulted as to their destination, it says.

"The mother-and-baby homes gave some assurance that their secret would be protected."

The report states that the women and children should not have been in institutions.

It says the conditions were "regimented and institutional" especially in the larger institutions before the 1970s, but it adds that there's no evidence of the sort of gross abuse that occurred in industrial schools and there are a small number of complaints of physical abuse.

The commission of Investigation found that many of the women suffered emotional abuse and were often subject to denigration and derogatory remarks.

The report says: "It appears that there was little kindness shown to them and this was particularly the case when they were giving birth".

It says the large institutions were regimented and inadequately staffed until the later decades.

The report states that the atmosphere appears to have been cold and uncaring.

Many of the women found childbirth to be a traumatic experience.

The overwhelming majority were first time mothers and they were probably uninformed about childbirth.

The report says that the trauma of childbirth must have been especially difficult for women who had no prospect of keeping the child.

However, the hostile comments were not restricted to mother-and-baby homes.

Women who were transferred from a mother and baby home to maternity hospitals to give birth, for medical reasons, were subjected to unfriendly comments by fellow patients and their visitors.

The commission also found evidence that after 1973 and the introduction of the unmarried mother's allowance that women who became pregnant were not always aware of this allowance and continued to face pressure from family "and perhaps the staff in a mother and baby home" to place their children for adoption.

The report says there is no evidence that the Catholic hierarchy played a role in the day-to-day running of mother-and-baby homes.

However, it says a religious congregation who wished to open any establishment in a diocese - such as a school, novitiate, or a mother-and-baby home - required the permission of the diocesan bishop.

It notes that the Galway county manager kept the archbishop of Tuam and the bishop of Galway informed about plans to move the Children's Home from Tuam, to the outskirts of Galway in the late 1950s.

The archbishop described the proposal as "undesirable in every way"; he claimed that the proposed new location was close to a busy road. "Anyone who has experience of the workings of a Home for unmarried mothers will tell you that such a Home must be in a place that is quiet, remote and surrounded by high boundary walls."

The commission says it has not seen any evidence that the religious orders, who ran the mother and baby homes, made a profit from so doing.

It says that at various times, it is clear they struggled to make ends meet and their members were not always paid for their work.

It says this was "a particular problem when occupancy levels fell and women stayed for shorter periods". Payments by local authorities were not always on time.

Socially, the report notes the question of a family's standing in the community.

Many Irish marriages until the 1960s involved an element of match-making and a dowry and these processes were reliant on a family's respectability.

An 'illegitimate' birth could destroy the marriage prospects, not just for the woman who had given birth, but for her siblings, hence the pressures to keep it a secret by sending her to a mother and baby home.

Many women who concealed their pregnancy from parents or family members were conscious of such attitudes. Pressure to keep their pregnancy a secret added to a woman's trauma.

On the issue of infant mortality, the commission says while the first report of the registrar general of the Irish Free State highlighted the appalling excess mortality of children born to unmarried mothers and subsequent Department of Local Government and Public Health reports noted the fact, that there was little evidence that politicians or the public were concerned about these children.

"No publicity was given to the fact that in some years during the 1930s and 1940s, over 40% of 'illegitimate' children were dying before their first birthday in mother and baby homes.

Denominational rivalry it says was not unique to Ireland but it appears to have persisted for a longer time than elsewhere and impacted on Irish mother and baby homes until the 1940s.

"The main motivation behind the British and Irish Catholic charities who were involved in repatriating Irish women from Britain, either pregnant or with their new-born infant, was to prevent these children being 'lost' to Catholicism through adoption into Protestant families.

Concerns, however far-fetched, that State-regulated adoption would result in Catholic children being adopted by parents of a different religion were a factor in delaying the introduction of legal adoption in Ireland until 1952.

It notes that Ireland was the second-last country in western Europe to legislate for adoption. 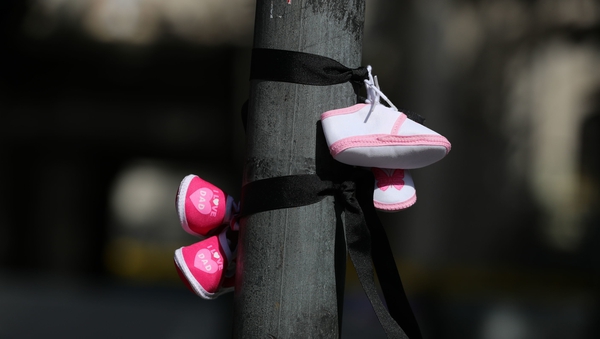 As it happened: Survivors receive long-awaited report on mother-and-baby homes