Supporters of President Donald Trump stormed the US Capitol today in a bid to overturn his election defeat, forcing Congress to postpone a session that would have certified President-elect Joe Biden's victory.

With drawn guns and tear gas, police evacuated lawmakers and sought to clear the Capitol Building of protesters, who surged through the halls of Congress.

One protester occupied the Senate dais and yelled: "Trump won that election."

Protesters overturned barricades and clashed with police as thousands descended on the Capitol grounds.

A woman who was shot during the protests has died, according to a spokeswoman for the Washington police.

The spokeswoman offered no details on who the woman was or the circumstances of the shooting, which is now under investigation by the metropolitan police. 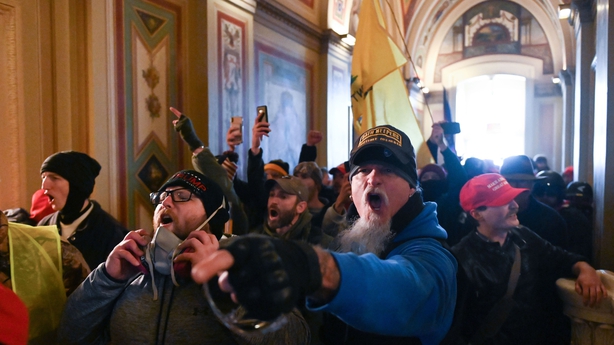 Mr Biden, a Democrat who defeated the Republican president in the 3 November election and is due to take office on 20 January, said the activity of the protesters "borders on sedition".

The former vice president said that for demonstrators to storm the Capitol, smash windows, occupy offices, invade Congress and threaten the safety of duly elected officials, it is "not a protest, it's insurrection."

He urged Mr Trump to demand "an end to this siege" on national television.

"To storm the Capitol, to smash windows, to occupy offices. The floor of the United States Senate ... It's not protest; it's insurrection." | https://t.co/pBs6aMcYIy pic.twitter.com/yVJxo9qlR3

In a video posted to Twitter, Mr Trump repeated his false claims about election fraud, but urged the protesters to leave.

"You have to go home now, we have to have peace," he said, adding: "We love you. You're very special."

Twitter Inc later restricted users from retweeting Mr Trump's video and tweet "due to a risk of violence".

The social media company Facebook pulled Mr Trump's video from its website, saying that it fueled violence by supporters who stormed the Capitol building.

"This is an emergency situation and we are taking appropriate emergency measures, including removing President Trump's video," Facebook vice president of integrity Guy Rosen said in a tweet.

"We removed it because on balance we believe it contributes to rather than diminishes the risk of ongoing violence."

YouTube has also removed a Trump video that appeared to be contributing to the mob violence by baselessly challenging the outcome of the recent presidential election.

Police cleared the last of the Trump supporters from the US Capitol, about four hours after it first came under attack.

Vice President Mike Pence, who had presided over the joint session of Congress, was earlier escorted from the Senate.

The violence and destruction taking place at the US Capitol Must Stop and it Must Stop Now. Anyone involved must respect Law Enforcement officers and immediately leave the building.

The chaotic scenes unfolded after Mr Trump, who before the election refused to commit to a peaceful transfer of power if he lost, addressed thousands of protesters, repeating unfounded claims that the contest was stolen from him due to widespread election fraud and irregularities.

Lawmakers had been debating a last-ditch effort by pro-Trump lawmakers to challenge the results, which was unlikely to succeed.

Critics had called the effort by the Republican lawmakers an attack on American democracy and the rule of law and an attempted legislative coup.

The top two Democrats in Congress, House of Representatives Speaker Nancy Pelosi and Senator Chuck Schumer, called on Mr Trump to demand that all protesters leave the Capitol and its grounds immediately.

Capitol Police told lawmakers in the House chamber to take gas masks from beneath their seats and ordered them to drop to the floor for their safety. Officers drew their guns as someone tried to enter the House chamber. Election officials of both parties and independent observers have said there was no significant fraud in the 3 November contest, which Biden won by more than 7 million votes in the national popular vote.

Weeks have passed since the states completed certifying that Mr Biden won the election by 306 Electoral College votes to Mr Trump's 232.

Mr Trump's extraordinary challenges to Mr Biden's victory have been rejected by courts across the country.

Mr Trump had pressed Mr Pence to throw out election results in states the president narrowly lost, although Mr Pence has no authority to do so.

"Our country has had enough and we will not take it anymore," Mr Trump said at the rally. 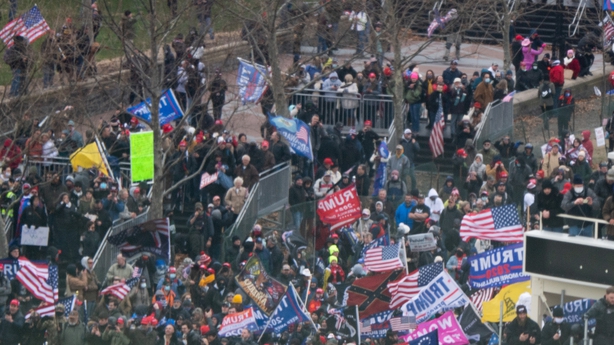 The certification in Congress, normally a formality, had been expected to stretch for several hours as some Republican lawmakers mounted an effort to reject some state tallies, starting with Arizona.

Republicans and Democrats, who had been bitterly divided over that effort, both called on protesters to stand down.

"This is un-American and this has to stop," said House Republican leader Kevin McCarthy, a Trump ally who supported the Republican effort to challenge the results.

That attempt was unlikely to succeed, as even many Republicans opposed it.

"If this election were overturned by mere allegations from the losing side, our democracy would enter a death spiral," said Senate Majority Leader Mitch McConnell, who helped give Mr Trump some of his biggest accomplishments. 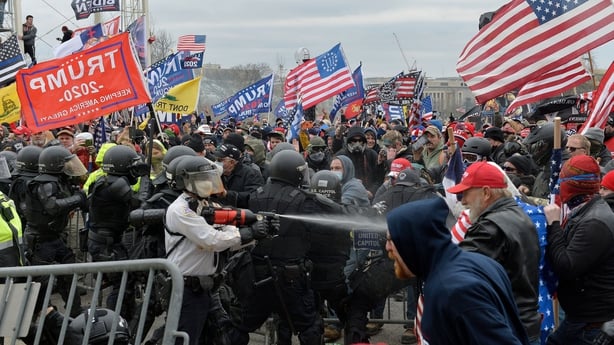 Mr Schumer called the challenges in Congress by Mr Trump allies "an attempted coup" and said: "The Congress does not determine the outcome of an election. The people do."

Outside the Capitol, members of militia groups and far-right groups, some in body armour, mingled with the crowds.

A suspicious device was found outside the Republican National Committee's headquarters, less than a block from the Capitol complex, and detonated by a bomb squad, according to a spokesman.

As Joe Biden calls on US President Donald Trump to go on air and demand an end to the "siege" of Capitol Hill, our Washington Correspondent @BrianOD_News has the latest on the situation. | Read more: https://t.co/xLRawySRnx pic.twitter.com/PjKAo2L8uh

The violence unfolded on the same day that Mr Trump's Republicans lost their majority in the Senate as they lost two runoff elections in Georgia. 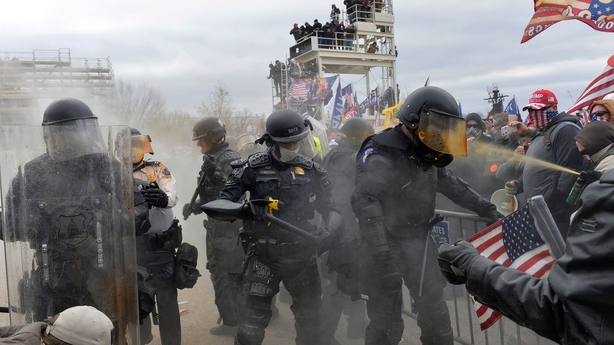 "We will never give up," Mr Trump earlier told thousands of cheering supporters on a grassy expanse near the White House called the Ellipse.

"We will never concede. It doesn't happen."

Mr Trump called on Mr Pence to overturn the election results as he presided over the debate in Congress. "If you're not, I'm going to be very disappointed in you," he said.

The US Constitution does not give Mr Pence the power to unilaterally overturn the results of the election, and the Vice President said in a statement he could not accept or reject electoral votes unilaterally. 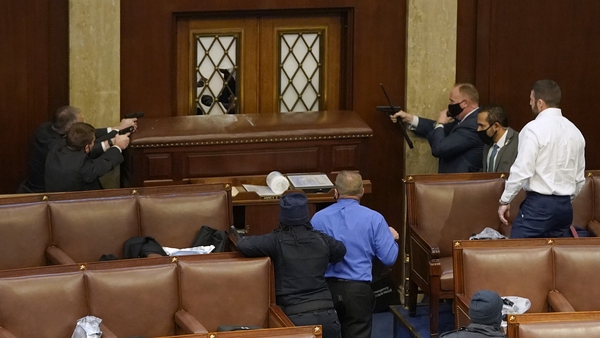 As it happened: Chaos in Washington as mob storms US Capitol