There is plenty of pomp and ceremony, but the official counting of the Electoral College votes by the US Congress is usually just a procedural, rubber-stamping exercise.

This year however there will be more focus than normal on the event.

Members of the Electoral College cast their votes for president in December and Joe Biden defeated Donald Trump by winning 306 electoral votes compared to Mr Trump's 232.

Today those votes will be carried into the House of Representatives chamber in special mahogany boxes.

The results from each state will be read aloud before a joint session of Congress presided over by the Vice President Mike Pence in his role as the president of the Senate.

It is also his job to declare the winner, but it is largely a ceremonial role.

Mr Pence doesn't have the power to throw out votes or overturn the result, much to the annoyance of Donald Trump who has been putting pressure on his Vice President to intervene and block Joe Biden's certification.

Members of Congress can object to the results and dozens of Republicans have vowed to do just that.

The counting of votes will then have to be stopped and the House and the Senate will go into separate sessions to consider the objections.

The challenges can only be upheld however if they are supported by both chambers and that is highly unlikely given that Democrats control the House of Representatives and several Republican senators have already acknowledged Joe Biden's victory.

It will however slow the process down and spark messy, divisive debates that will no doubt see plenty of Donald Trump loyalists repeating his baseless claims of voter fraud.

Conspiracy theories about rigged voting machines and fake ballots have been disproven and dismissed by the courts but it hasn't stopped the US president continuing to insist that he is the rightful winner and that the election was stolen from him.

We can expect him to make those claims again today when he addresses thousands of his supporters who are gathering in Washington for a series of pro-Trump rallies.

The first of the protests were held in the US capital last night with crowds assembling close to the White House.

Linda Chalk travelled to Washington from Dallas, Texas to attend the rally.

"You're never going to meet better people than Trump supporters, they are patriots who love God and country," she said.

Linda rejected claims that there is no evidence of widespread voter fraud.

"That's according to mainstream TV. There's no way Donald Trump lost, look at the size of his rallies."

Caroline Kyle travelled from Fort Worth, Texas to show her support for Donald Trump.

"I'm here because I'm opposed to election fraud. There's lots of evidence of fraud but you're just not hearing about it on mainstream media," she claimed. 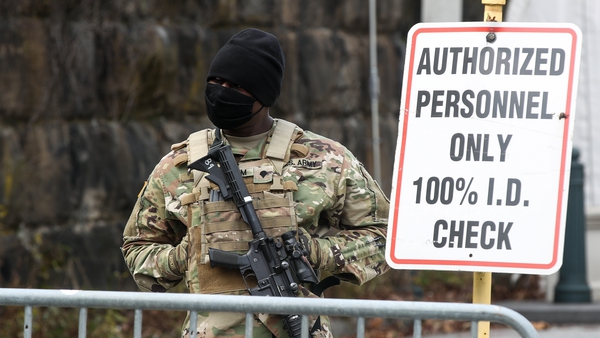 Soldiers withdrawn from US presidential inauguration