Boris Johnson has ordered a third national lockdown for England to combat the spread of coronavirus.

In a televised address, the British Prime Minister said the new variant, which is 50% to 70% more transmissible, was spreading in a "frustrating and alarming" manner.

"As I speak to you tonight, our hospitals are under more pressure from Covid than at any time since the start of the pandemic," he said.

"We must therefore go into a national lockdown, which is tough enough to contain this variant."

Mr Johnson said that his government was asking people to stay at home, however people may leave if it is impossible to work remotely, to shop for necessities and to exercise.

He bowed to significant pressure to order primary schools, secondary schools and colleges to move to remote teaching for the majority of students from tomorrow.

The measures are expected to last until at least mid-February.

Mr Johnson said: "You may only leave home for limited reasons permitted in law, such as to shop for essentials, to work if you absolutely cannot work from home, to exercise, to seek medical assistance such as getting a Covid test, or to escape domestic abuse.

"If you are clinically extremely vulnerable, we are advising you to begin shielding again.

"And because we now have to do everything we possibly can to stop the spread of the disease, primary schools, secondary schools and colleges across England must move to remote provision from tomorrow, except for vulnerable children and the children of key workers."

Mr Johnson's statement came after the chief medical officers for the first time raised the UK to the highest level on the Covid-19 alert system.

They warned the NHS is at risk of being overwhelmed within 21 days "in several areas" without further action.

Boris Johnson says Covid cases in English hospitals have increased by a third in the space of a week. Says it is clear "we need to do more together". Announces a national lockdown "that is tough enough to contain this new variant".

Mr Johnson said he knew how tough the new lockdown would be but said that "now more than ever, we must pull together".

"The weeks ahead will be the hardest yet but I really do believe that we are entering the last phase of the struggle," he added.

It comes after Scotland announced similar measures to come into force from midnight.

People are being ordered to stay at home for January to tackle the escalating Covid-19 crisis, First Minister Nicola Sturgeon has said.

Ms Sturgeon told the Scottish parliament that from midnight, people will face a legal requirement to stay at home, except for essential purposes.

This is similar to the lockdown imposed at the start of the pandemic in March last year.

"The situation is extremely serious," she said. 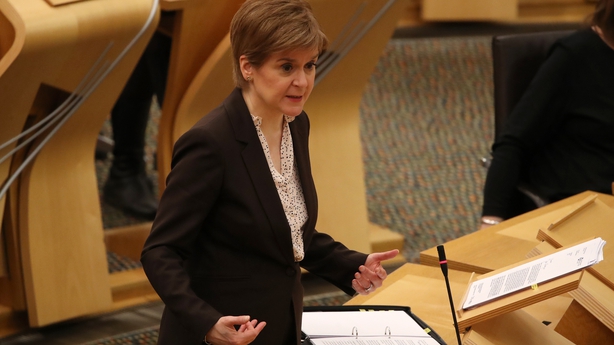 Ms Sturgeon said schools will stay shut to most pupils until February, meaning an additional two weeks of home learning for most children.

The Scottish government had already announced the festive academic break was being extended to 11 January, with ministers having originally planned for remote learning until 18 January.

However, schools will still be open for the children of key workers who cannot work from home, and for vulnerable children. 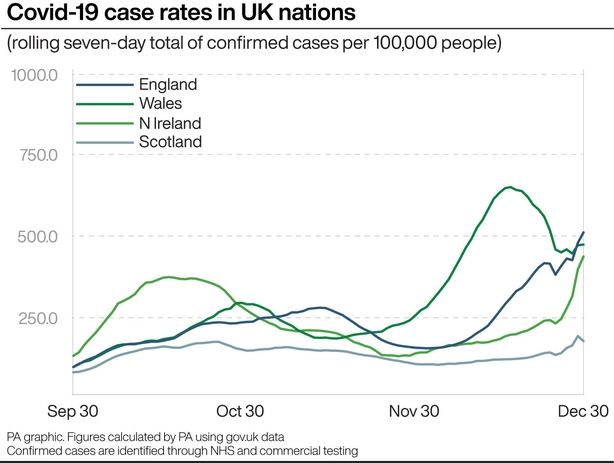 A further 407 people have died from Covid-19-related illnesses in the UK, bringing the total number of deaths to 75,431.

Separate figures published by the UK's statistics agencies for deaths where Covid-19 has been mentioned on the death certificate, together with additional data on deaths that have occurred in recent days, show there have now been 91,000 deaths involving Covid-19 in the UK.

The figures do not represent results from the whole UK due to data on deaths not being reported by Scotland today.

The UK government hopes the arrival of the Oxford/AstraZeneca vaccine will change the course of the fight against coronavirus.

The latest data show a 41% rise in the number of confirmed coronavirus patients in hospital in England between Christmas Day and 3 January, figures which have caused alarm.

The rollout of the Oxford/AstraZeneca vaccine, which is easier to distribute than the other approved jab from Pfizer/BioNTech, could provide a route out of further lockdowns, but it could be months before sufficient numbers have received their first shot.

Ministers have said the NHS has the capacity to deliver two million doses a week of the Oxford vaccine but supplies are limited.

While some 530,000 doses are to be available from today, the Department of Health and Social Care (DHSC) said tens of millions more are to be delivered in the coming weeks and months once batches have been quality checked.