The Minister for Education has said it is the Government's "firm intention" to reopen schools on 11 January.

Norma Foley told RTÉ's News at One programme that giving schools an extra two or three days holidays "affords families and society an opportunity to ensure their contacts are minimised" before children go back to school.

Yesterday the Taoiseach announced that schools would remain closed until Monday 11 January. Primary and secondary schools had been due to reopen on Wednesday 6 January.

Ms Foley said that delaying the reopening was not recommended by the National Public Health Emergency Team.

She said the move was an "attempt to control movement in the wider community" and that it is about encouraging society to take on board the new restrictions and associated behaviours.

Yesterday, the Government announced a move to full Level 5 restrictions for a four-week period to try to address the rise in coronavirus infections across the country.

Ms Foley said that the information and analysis about schools is reassuring and that up to Christmas, three-quarters of all schools had no engagements with public health.

In the last week, Ms Foley said that there were 94 cases of Covid-19 reported out of 1.1 million staff and students.

She said that "almost 97% of cases" tested in schools are negative.

"I think the figures are very reassuring", she said, adding that they show the "tremendous work" of school communities to maintain safe environments.

Asked whether teachers should be prioritised in receiving the vaccine, Ms Foley said school community staff were being prioritised.

Earlier today, the Minister for Justice, Helen McEntee, said the Government has no intention to extend the school closures beyond the first week of January but added they are keeping "everything under review". 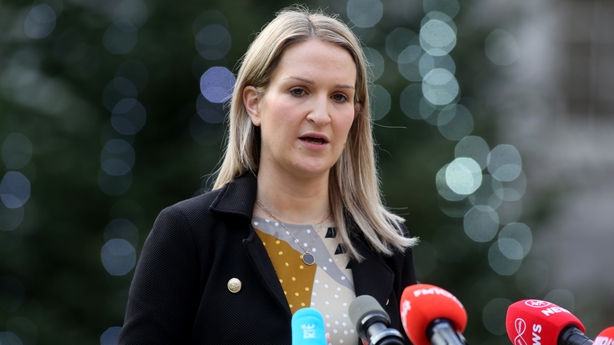 Speaking on RTÉ's Morning Ireland programme, Ms McEntee said delaying the return by a few days gives both students and staff a chance to limit their contacts.

"Given the sharp rise in numbers, we have a lot of people isolating, it gives them time to go through that period and everyone a chance to limit contacts," she said.

She was keen to stress that schools are deemed safe environments and have been managed really well during the pandemic.

Ms McEntee said in a short space of time the spread of Covid-19 has "surpassed the worst-case scenario".

She said decisions that have been made in recent weeks were all based on a number of factors.

"I sat at a meeting at the end of November where we looked at a lot of data, spoke with NPHET (the National Public Health Emergency Team) and looked at everything from the best-case scenario and worst-case scenario.

"Taking into account all factors, our economic situation, the well-being of our entire population, mental health, we made the decision we made on [that] basis," she explained.

She said at that time they looked at everything from the best-case scenario over Christmas to the worst.

However she said she is not sure anyone would have predicted how the situation escalated in the last two weeks.

Early years facilities should be treated the same as schools, says CEO

Meanwhile, Teresa Heeney, CEO of Early Childhood Ireland, has expressed her disappointment that while school holidays are being extended due to the surge in Covid-19 rates, early years facilities must still reopen on 4 January.

Speaking on RTÉ's Today with Philip Boucher Hayes, Ms Heeney said they should be treated exactly the same way as schools and thinks it is a "poorly thought out" decision.

She said their members have no idea why they are remaining open and said they are incredibly disappointed.

"They are confused, they don't understand it and they are getting all sorts of calls from parents."

She said their 3,800 members are all wondering what they are supposed to do.

"It is a completely unacceptable new fork in the road."

Ms Heeney said they have been shadowing the track of schools during the pandemic and were the first sector to reopen on 29 June.

"And yet school-going children are being afforded the opportunity to stay home in order to let the new restrictions take place so everyone will be safer. And yet early years facilities are expected to open on the 4th of January."

She said there are as many early years facilities in Ireland as there are primary and secondary schools.

"So we are talking about an awful lot of locations and about 500 of those are based in schools. And the same children often attend both. They go to school and attend the early years faciltiies for breakfast club or after school activities," added Ms Heeney.