The Government is "minded" to go with "significant restrictions" on the hospitality sector before New Year's Eve, the Taoiseach has said.

Speaking after a meeting of the North South Ministerial Council, Micheál Martin said the Government would ultimately decide when the Cabinet meets on Tuesday.

However, he said they are "very minded" to accept the advice from the National Public Health Emergency Team (NPHET) to bring the restrictions into effect from 28 December.

He said given the rising number of Covid-19 cases over the last week there is a desire to avoid exacerbating that even more with New Year's Eve.

He said Government "stands ready" to support the hospitality sector.

Taoiseach @MichealMartinTD says NPHET is recommending significant restrictions on hospitality before the end of the year, and the Government 'is minded to go with that'. He says a decision will be made on Tuesday | #Covid19 | https://t.co/r4E52kBxkz pic.twitter.com/hKvgD0iH6O

NPHET is also recommending that household visits be reduced to one, as opposed to three and that inter-county travel cease. The length of the additional restrictions will be decided by Government.

Speaking at the same event Tánaiste, and Fine Gael leader, Leo Varadkar said at this stage there is no recommendation for the closure of the non-retail sector, personal services and gyms.

A Cabinet meeting to decide on the recommendations is expected to take place on Tuesday.

The Minister for Health, Stephen Donnelly, has confirmed that NPHET "have essentially recommended closing down hospitality", but he said the letter did not contain details of how long the sector should remain closed.

"They have essentially recommended closing down hospitality and retail should remain open."

Speaking on RTÉ's Drivetime, Minister Donnelly said it is "unclear" how long restrictions could be in place, because he said, "that will depend on what happens with the virus."

The Minister would not be drawn on the specificities of the recommendation given by NPHET as he said, "other Government colleagues have not seen the detail yet, and out of respect for them I want to leave that. The recommendations have serious effects on their sectors."

He also said that "lead indicators" suggest that social contacts are up, with those who are testing positive now confirming about five close contacts.

"What we all anticipated, which was a lot more socialisation around the Christmas period has happened, and that has driven the virus up," he said.

He said there is evidence to show a link between a rise in cases and activities in hospitality.

"I think it's very unfair. The vast majority of the hospitality sector are doing the right thing and it is it is heartbreaking for them. They've had such a difficult year."

Earlier, Chief Medical Officer Dr Tony Holohan said the level of social contact now happening has increased to a level we cannot cope with as a country.

With the hospitality sector saying it cannot cope with yo-yo severe restrictions, @CMOIreland says NPHET makes recommendations based on data and the Government makes decisions. 'We have significantly increased, to a level we cannot cope with as a country, our social contacts'. pic.twitter.com/urueIZnU2D

His comments come on the day some restrictions aimed at halting the spread of Covid-19 have eased for the Christmas period.

Households are now allowed to mix with up to two other households. Previously, people were only allowed to visit those in their own household bubble.

People will also be allowed to travel outside their county.

The measures came into force at midnight and were due to remain in place for at least three weeks.

However, ministers are likely to look at bringing forward the tightening of restrictions to the end of December.

On @MorningIreland, @CMOIreland notes 'a concerning increase in the pattern of transmission of infection that we've seen, particularly reported in recent days, but established really when we began to ease restrictions in the early part of December' | https://t.co/klKXsYye0U pic.twitter.com/llWaxRqTIR

There has been "too much social contact" in the past two weeks and the reproduction rate of the virus is probably higher than 1.3 as they have yet to see the effect of recent social contacts, Dr Holohan said.

He said there is still time to take action to stop the rise in Covid-19 cases, so further restrictions are not imposed.

Just hours before the restrictions on inter-county travel were lifted, NPHET detailed what it called "very strong and very concerning" early warning signs of a resurgence of the virus.

Lead indicators such as GP consultations, test referrals, and Covid-19 test positivity rates have all increased.

Other measurements indicate people moving around much more and increasing close contacts.

NPHET said it all adds up to a very high risk of a new and rapid surge in Covid-19 cases which, if it was allowed to continue, could see up to 1,200 cases per day by the second week of January if not sooner - putting our health and education services under enormous pressure.

They are urging people to remain extremely cautious, limiting our number of contacts per week, and to take every precaution during such contacts.

Labour Leader Alan Kelly yesterday said that the public cannot be expected to wait for five days to hear from the Government about any potential additional Covid restrictions that may come into force before the new year.

Mr Kelly said: "Restrictions on inter county travel are due to be eased... People have made plans to see their loved ones. They cannot be expected to wait in limbo until a Cabinet meeting on Tuesday.

He added: "The hospitality industry also need to know whether they will be able to remain open as intended for the New Year. Hotels, restaurants and pubs have taken bookings and many livelihoods depend on the busy Christmas period."

Minister of State for Business, Employment Affairs and Retail Damien English has said it is not inevitable that restrictions will be brought forward but there has been a 25% increase in Covid-19 figures in the last week which is "very concerning".

Minister English said that there is "always a hope numbers might stabilise" in the next few days and the Government will look at all the information available and talk to industry leaders before making a decision.

Speaking on RTÉ's Today with Claire Byrne, he said the issue is around the movement of people and close contacts have increased to over four now as people socialise and interact.

He said the Government did its best to get businesses re-opened ahead of Christmas and for people to have some Christmas get togethers.

Sinn Féin TD for Donegal Padraig MacLochlainn has said that the Cabinet needs to meet sooner to make it clear what changes to restrictions will be decided upon.

Mr MacLochlainn said that there is a public health crisis that needs an appropriate response, but it should not have been announced during an interview with the Taoiseach.

He said that in Donegal, Letterkenny University hospital "has lost control of the virus", with all staff at the hospital re-tested for the virus. He said that 160 staff were off duty at present.

He said that cross-border movement as well as funerals and other interactions had added to the spread of the virus.

The co-leader of the Social Democrats, Róisín Shortall said it is important that the Government gives an exact date for the re-introduction of restrictions.

She said that the it was a "terrible blow" for the hospitality industry.

However, she said the figures were going in the wrong direction and that it's important that action is taken.

Ms Shortall pointed out that it will be some time before everybody is vaccinated and that there needs to be a coherent joined up strategy - particularly with Northern Ireland. 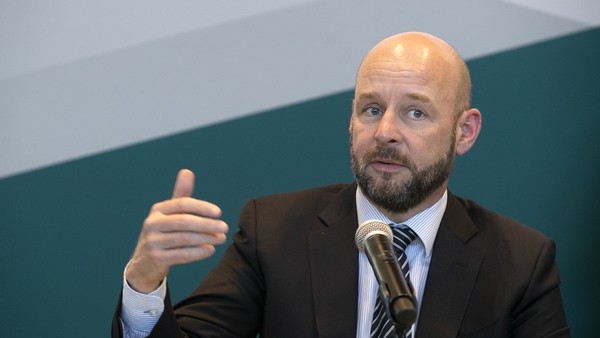 Public urged to be 'exceptionally careful' as Covid cases rise