Chris McNaghten and Jon Swan married in Co Antrim in a ceremony officiated by a religious minister with the Harbour Faith Community, which describes itself as the home of progressive Christianity.

Yesterday's ceremony was made possible through a recent change to legislation.

Mr McNaghten said: "We are so glad to be finally having our day together after a long wait and several attempts this year.

"It’s amazing to see Northern Ireland now in line with the rest of the UK and Ireland regards equality for the LGBTQ community.

"My praise goes out to all those involved in this battle for equality over the years."

Mr McNaghten said the couple would not see themselves as having strong religious beliefs.

He added: "However, our family minister is someone with whom we are close and trust, and some of our family take comfort from a religious ceremony.

"For most people, your wedding day is known as being the best day of your life. For us, it’s a dream come true that, growing up, we thought we would never have."

The ceremony was held at Hillmount House in Larne, a privately-owned Georgian house which is available for hire. 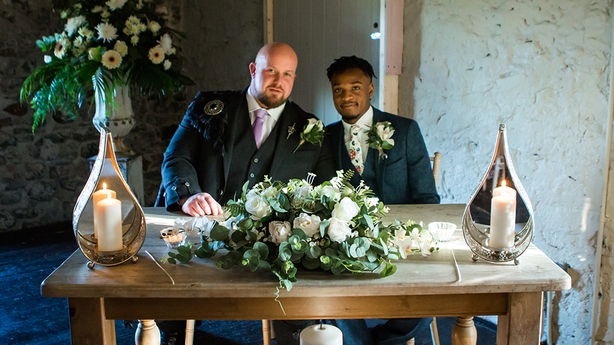 Same-sex couples in Northern Ireland are now able to get married in a religious ceremony where the church or other faith group wishes to offer such weddings, although no church is compelled to facilitate same-sex weddings.

Similar arrangements are already in place in the rest of the UK and Ireland.

On Monday, the first same-sex couples with existing civil partnerships were able to convert to full marriage status in town halls across Northern Ireland.

It followed a lengthy campaign and legislative change at Westminster while Stormont powersharing was suspended.

Patrick Corrigan, Northern Ireland director of Amnesty International, one of the leaders of the Love Equality campaign, said: "This has been a momentous week for equal marriage in Northern Ireland.

"With Chris and Jon's wedding today, following the first civil partnership conversions on Monday, we now reach the end of the long campaign for marriage equality here.

"For those couples who want a church wedding or another religious dimension to their wedding ceremony, the recent law change is hugely significant.

"As part of our campaign, we fought not just for the freedom to marry, but also for freedom of religion and that is what we have witnessed today with the Harbour Faith Community providing the Christian religious context.

"We thank them for providing a supportive church community for LGBT+ people of faith."

The mainstream Christian churches believe marriage is between a man and woman and do not carry out same-sex wedding ceremonies.