Democratic vice presidential hopeful Kamala Harris has called President Donald Trump's Covid-19 response a historic failure that disqualified him from a second term, in a pointed but mostly civil debate with Mike Pence who sought to portray her as extreme.

With Mr Trump's weekend hospitalisation for Covid-19 throwing a new importance on the role of the vice president, Mr Pence and Ms Harris spoke separated by plexiglass as a safety precaution 27 days before the election.

Ms Harris, who would be the highest-ranking woman in US history if she enters the White House under a president Joe Biden, immediately attacked Mr Trump's record on Covid-19, which has killed more than 210,000 people in the United States, more than in any other country.

"The American people have witnessed what is the greatest failure of any presidential administration in the history of our country," said Ms Harris, a US senator from California and former prosecutor.

"Frankly, this administration has forfeited their right to re-election based on this," she added before a masked and limited audience at the University of Utah.

"The president said it was a hoax. They minimised the seriousness of it," she said.

After a raucous debate eight days ago between Mr Trump and Mr Biden, Mr Pence and Ms Harris took a more civil tone with no name-calling, but sharply disagreed on the reaction to the pandemic.

"When you look at the Biden plan, it reads a lot like what our [Covid-19] taskforce has been doing... it looks like plagiarism, which is something Joe Biden knows about"

"I want the American people to know, from the very first day, President Donald Trump has put the health of America first," Mr Pence said, pointing to his ban on travel from China on 31 January, a month after cases first emerged in Wuhan.

Referencing a controversy that tanked Mr Biden's first presidential campaign in 1988, Mr Pence said the Democrats' Covid plan sounds "a little bit like plagiarism, which is something Joe Biden knows a little bit about". 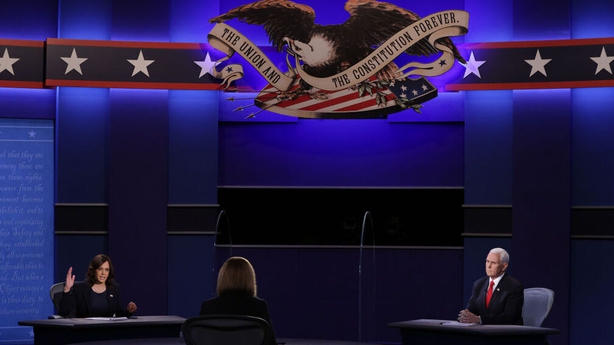 In contrast to President Trump's firehose-like blasts on Mr Biden and his family, Mr Pence demonstrated calm and stability and congratulated Ms Harris on the historic nature of her candidacy.

Ms Harris, the daughter of Jamaican and Indian immigrants, would also be both the first African-American and Asian-American vice president.

But Mr Pence tried to portray her as a radical, saying that Ms Harris, generally considered close to the Democratic establishment, was further to the left than socialist Bernie Sanders.

Mr Pence, questioned by moderator Susan Page of USA Today, acknowledged that "the climate is changing" but insisted that market solutions were the best way to reduce carbon emissions.

Even if they delved more into substance, the two candidates revealed little new about their policies and were notably evasive on hot-button issues, such as abortion and the US Supreme Court.

In one moment that went without commentary on stage but triggered an avalanche of social media commentary, a fly found its way onto Mr Pence, spending a visibly long time on his white hair.

The two candidates still scoffed at each other's remarks. At one point, Ms Harris, firmly but with a smile, reproached Mr Pence, telling him: "Mr Vice President, I'm speaking."

They had one of their most intense clashes about racial justice after nationwide protests over police treatment of African-Americans.

"It's a great insult to the men and women who serve in law enforcement. And I want everyone to know who puts on the uniform of law enforcement every day, President Trump and I stand with you," he said.

Mr Pence, criticising media coverage, insisted that President Trump condemned white supremacy despite what some viewers interpreted at the president's shout-out to the far-right Proud Boys group at his debate last week. 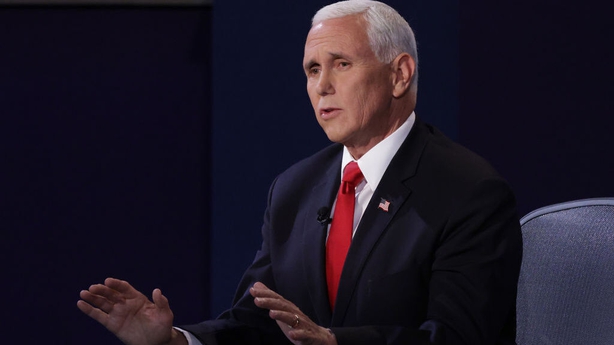 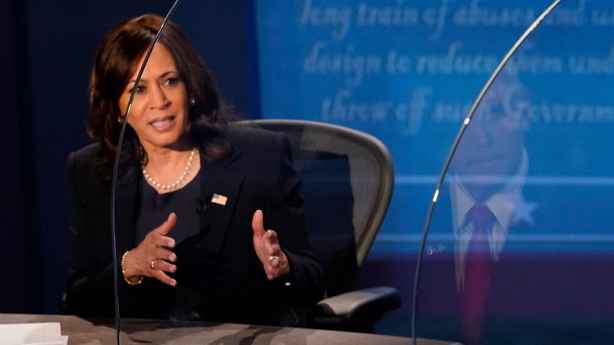 Ms Harris pointed to a slew of previous statements by President Trump, including his notorious remarks that "fine people" were at a 2017 neo-Nazi rally in Charlottesville, Virginia that turned violent.

"I will not sit here and be lectured by the vice president on what it means to enforce the laws of our country," Ms Harris said.

"I'm the only one on this stage who has personally prosecuted everything from child sexual assault to homicide."

Two more presidential debates are scheduled, but they are now up in the air with Mr Trump's Covid-19 diagnosis.

Mr Biden has said he would not want to debate if President Trump is still sick with the virus.

But Mr Trump, ever the hyperbolic showman, said in a video yesterday that he felt "perfect" and called his infection "a blessing from God".

President Trump appeared to be watching the vice presidential debate avidly, tweeting without using Ms Harris' name that "she is a gaffe machine". 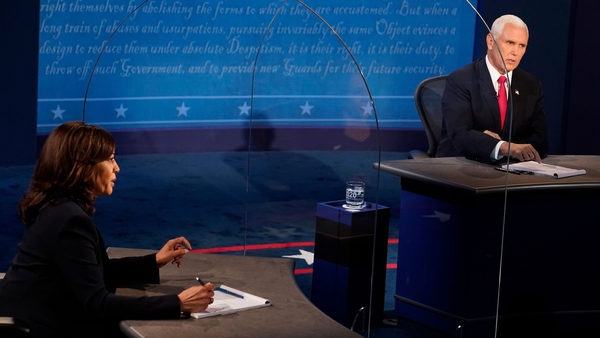