Democrat Joe Biden told US President Donald Trump to "shut up" in an opening debate that turned almost immediately into a shouting match 35 days ahead of the most tense US election in recent memory.

The debate in Cleveland, Ohio, was as bad-tempered as had been feared, with Mr Trump leading the way in yelling over his challenger and the Fox News moderator Chris Wallace alike.

There was no handshake as the two men took the stage and while this was due to Covid-19 restrictions, the absence of the traditional greeting symbolised divisions through the country in the final countdown to 3 November.

Mr Trump went as hard on 77-year-old Mr Biden as he had threatened to do, saying the "radical left" had the centrist Democrat "wrapped around their little finger".

This is one of the standout moments so far. Amid repeated interruptions by @realDonaldTrump, @JoeBiden says: "Will you shut up man!" #Debates2020 @rtenews pic.twitter.com/UvW62gC4Wy

And he got personal, seeking to rile the Democrat by accusing one of his sons of corruption, and telling Mr Biden that "there's nothing smart" about the Democrat.

Mr Biden, though, not only gave as good as he got, he launched the kind of attack on Mr Trump that the billionaire president has rarely had to endure to his face.

"Liar," "racist" and "clown" were just some of the missiles launched from Mr Biden, who also branded Mr Trump the "puppy" of Russian President Vladimir Putin.

At times, neither Mr Biden nor Mr Wallace could get a word in, as Mr Trump loudly touted his economic record and went after Mr Biden's son Hunter.

Read more: Nine takeaways from the US presidential debate

At one point an exasperated Mr Biden, who leads strongly in the polls, turned to Mr Trump and said: "Will you shut up, man!"

The Republican had even spread lurid conspiracy theories right up until the last minute that Mr Biden would need drugs or an earpiece secretly providing answers to get through the night.

The anger-filled event did nothing to calm fears around the country that the presidential election, taking place in the middle of an ongoing coronavirus pandemic, could end in chaos.

Asked by Mr Wallace whether they pledged to urge calm and refrain from declaring victory if the election results are not immediately known, Mr Biden said: "Yes."

Mr Trump, though, would not commit, saying that if he saw "tens of thousands of ballots being manipulated, I can't go along with that".

A few minutes into the debate. @realDonaldTrump can't stop interrupting both @JoeBiden and the moderator Chris Wallace. Lots of laughter and smiles from Mr Biden. @rtenews pic.twitter.com/VJUUr6OpiJ

And when asked if he condemned far-right armed militias like the Proud Boys group, Mr Trump gave a cryptic reply: "Proud Boys - stand back and stand by."

Mr Biden sought to tie Mr Trump squarely to the Covid-19 pandemic that has claimed more than 200,000 lives in the US, more than in any other country.

And he came with a visible plan to dodge the Trump rhetorical storm by frequently turning to face the cameras directly and addressing the tens of millions of people watching across the country.

"How many of you got up this morning and had an empty chair at the kitchen table because someone died of Covid?" Mr Biden said, channelling his famed ability to show empathy for the suffering, something that Mr Trump has long had difficulty in matching.

Mocking the 74-year-old Mr Trump for one of his more notorious statements on supposed cures for coronavirus, Mr Biden said: "Maybe you could inject bleach in your arm and that would take care of it." 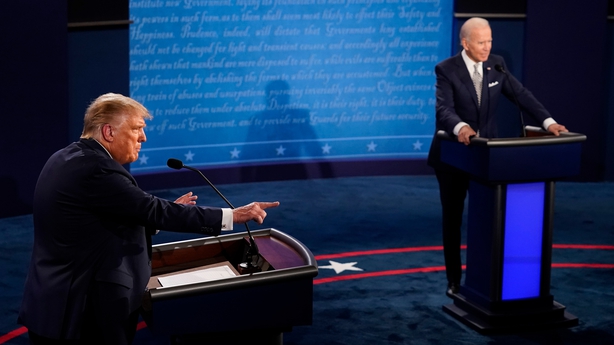 Before they even appeared for the first of their scheduled three 90-minute TV showdowns, Mr Biden was capitalising on bombshell revelations in The New York Times that his billionaire opponent had managed to avoid paying almost any federal income taxes for years.

Mr Trump, who has broken long-time presidential transparency by refusing to publish his tax returns, reportedly used loopholes to pay just $750 in federal tax during the first year of his presidency.

Hours before the Cleveland showdown, Mr Biden published his own tax returns and at the debate demanded that Mr Trump do likewise.

Mr Trump insisted at the debate that he has paid "millions" in taxes.

But the affair continues to threaten to provide Mr Biden ammunition to try to chip away at Mr Trump's crucial support from blue collar voters or what the Republican calls "the forgotten men and women".

9 takeaways from US presidential debate